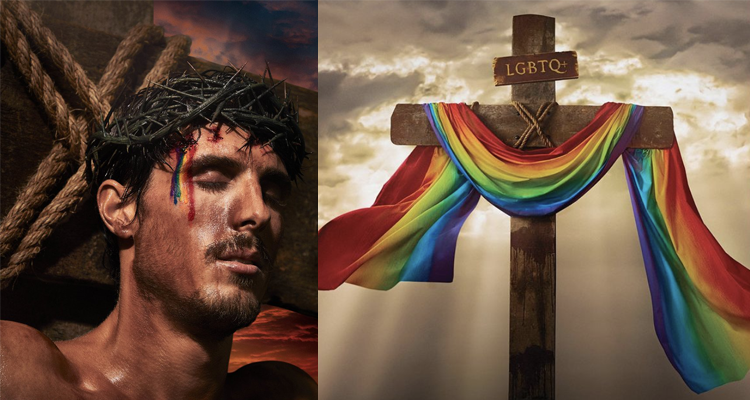 Out On Film, Atlanta’s gay film festival, celebrates its 35th anniversary this year. One of the can’t-miss films is “Wonderfully Made — LGBTQ+R(eligion),” a feature-length documentary meets fine-art project that examines the anti-LGBTQ viewpoints of the Catholic Church and the lack of diversity and queer representation within religious spaces and art. Emmy winner and LGBTQ activist Yuval David and his husband, Mark McDermott, take on the arduous task of including queer voices and faces in religious artwork and analyzing the complicated relationship between the Catholic Church and the LGBTQ community.

David’s directorial and creative abilities, for which he won an Emmy earlier this year in the Talent: Program Host/Moderator/Correspondent category for his short-form series One Actor Short, are on full display in “Wonderfully Made.” The project took nearly four years to complete and highlights the importance of representation and inclusivity within religious spaces.

McDermott was David’s inspiration for the film. McDermott’s Catholic faith was important to him, but he felt it failed to positively represent his sexual identity. David saw this as an opportunity to create religious art that would include his partner and the LGBTQ community.

“Art is the form of advocacy that is [not only] for my husband but for anybody that is, like him, searching for that representation,” David told Georgia Voice.

“There is a lacuna throughout art history and religious art” depicting nonheterosexual, noncisgender, nonwhite religious iconography that needs to be corrected, according to David.

“It was very hard to find a high art, fine art representation of an LGBTQ Jesus,” he said. “We wanted to create something like all of the iconographies that are seen on the walls of churches … on the walls of galleries and art museums.”

“Admittedly, I don’t do anything small,” David joked. In response to his husband, McDermott spoke on the evolution of the project, “[what] started as a 10-minute documentary short to a massive art project with a huge collaborative team to a 95-minute feature-length documentary,” touching on the anti-LGBTQ views from the Catholic Church, including the 2016 Pulse shooting in Orlando and the lack of support from the Church at that time.

“Catholicism has a rich history of social activism,” David said. “There is a passionate group of individuals working inside the church to minister to the LGBTQ community. I wanted to hear their stories, and understand the challenges that they face.”

Some of the most outspoken figureheads – like Bryan Massingale, the only openly gay Black Catholic priest in the world, and Father James Martin, S. J., American Jesuit priest and writer — appear in the film to explore the relationship between the LGBTQ community and the Catholic Church.

In the film, Massingale describes the damage that lacking representation in religion has done: “If we can’t imagine ourselves in the image of God, then that does irreparable spiritual harm to us.”

Anti-LGBTQ sentiments from the Catholic Church and its members have long plagued the lives and safety of members of the LGBTQ community. Even the most progressive of his rank, Pope Francis, has seemingly mixed beliefs on LGBTQ rights and the community.

It should come as no surprise that the film will spark controversy.

“It might ruffle feathers before they even see it,” David said. The Catholic Church has both passively and actively condemned homosexuality, citing homosexuality as the issue, not pedophilia, in regard to the sex abuse committed by the clergy in the Catholic Church, kicking out transgender members who are waiting to receive communion, and refusing to acknowledge the sanctity (and legality) of marriage between two members of the same sex.

The request for inclusivity and acceptance of LGBTQ people in religious spaces has always been controversial, but Wonderfully Made creates the opportunity for these two unlikely identities to blend. The fine art photography project depicts nine models of various races, sexualities, and gender identities as some of the most recognizable images of Jesus. The images will be available to view following the screening at wonderfullymadefilm.com.

“Wonderfully Made” screens Saturday, September 24 at 5pm at Landmark Midtown Art Cinema and will be available for streaming the same day.