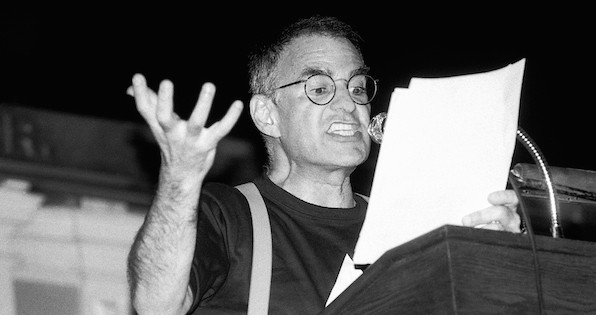 As someone who was active in New York during the early days of the AIDS crisis, Jean Carlomusto remembers the time well, and now makes documentaries about the era. Her new film “Larry Kramer in Love & Anger” debuts on HBO June 29.

The film charts Kramer’s days in the film industry—writing the screenplay for “Women in Love”—before turning his back on the business and becoming an activist in New York as AIDS began to decimate the community. He was vital in organizations such as ACT UP and Gay Men’s Health Crisis (GMHC), and as a writer, his play “The Normal Heart” is universally adored.

Carlomusto, who is out, has known Kramer since the mid 1980s. In late 2010 she was at a reading Kramer gave from his book, “The American People,” and knew the time was right to make a film. “I was so moved at what he was putting forth,” she says. “I said it is time for Larry to get acknowledged and appreciated for what he did. I was sitting next to Dr. Larry Mass, another cofounder of GMHC and a hero in his own right. The two of us looked at each other and just said, ‘Larry’s an incredible guy. Why hasn’t a documentary been made about him?’”

She approached Kramer about the documentary, and he didn’t want to do it at first. He had been contacted by several people before and had tried working with one of them, but it didn’t feel right.

“But I kept running into him in very serendipitous ways,” says Carlomusto. “He has known I have been documenting the AIDS movement since the mid ‘80s and he had seen the piece I did called ‘Sex in an Epidemic,’ so he knew I was going to be fair. I tried to be fair at representing all angles. I was part of the movements and I would paint an accurate portrait—and I didn’t have an axe to grind.”

She started soon afterward, and finished in the fall of 2014, almost five years later. She includes new and archived footage of Kramer, and she interviews many of his colleagues.
Her biggest challenge was an unexpected one—Kramer almost died during the making of the film.

She had shot half the interviews and was looking forward to getting footage from Kramer and his partner David when he landed in the hospital, near death. “I didn’t expect to be shooting so much in the hospital,” she says. “So much of the work early on was documenting friends who had died and the work was at hospital. This activated a painful place. I really did not want to be making a documentary about Larry dying, but you have to go where the material brings you. It was moving to see Larry fighting for his life and to see how strong he is in many ways.”

When she started working at GMHC, Kramer was no longer there, but he was still very much a force. He was a reason it existed, she says, even though their parting wasn’t on great terms. Everyone recognized his fire and passion, however, even when they didn’t agree with his tactics.

“I think a lot of people dismiss Larry as a crazy, angry guy; they don’t appreciate the totality of his contribution,” says Carlomusto. “Am I saying that Larry Kramer is the only history of the AIDS epidemic? No—there is no one definitive film about the AIDS epidemic. There were many responses. I personally witnessed what happened in New York City and he was a remarkable hero who spearheaded the responses to the gay plague.”

A college professor for more than 20 years, she has noticed that while her students are generally more in favor of issues such as marriage equality, they don’t know the history of how gays and lesbians went beyond being a disenfranchised people to raising their voices together. ”Part of what I was trying to do (with the film) is give a history, to give a remarkably brief look back. Looking back to 1980 you can see egregious discrimination and horrible disregard for the lives of gay men, who were dying.”

She saw many friends die; just during her time at GMHC, three of her supervisors passed away. It left scars. “I have a great archive of friends and acquaintances no longer here. I feel like I am taking responsibility in a way not to forget. This is part of why I do the work. It was a historically important moment that needs to be remembered. Many of us feel the need to keep the story alive.”

Kramer has been better this year and has made appearances with the film, including at the Provincetown International Film Festival. “He’s in a great shape,” says the director. “I saw him and he looks terrific. The positive response he is getting to the film and his new book coming out, I think it gives him some wind under his wings that he has important work to do. For so long, he has been this angry guy and I think people were afraid of him. What I wanted to do was show the other side, the Larry who is kind of a shy, sensitive guy.”