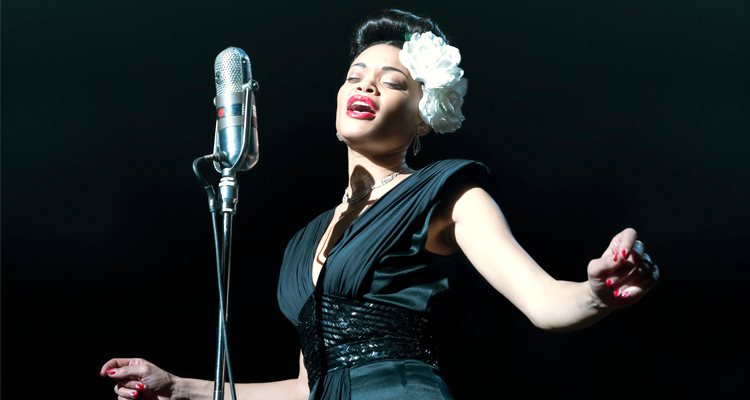 Her voice was legendary, as were some of the battles she faced in her career. Lee Daniels’ new film, “The United States vs. Billie Holiday,” revisits the life of the iconic, openly bisexual singer.

Andra Day makes her feature film debut here, starring as Holiday in a role that has earned her a Golden Globe nomination. The movie charts Holiday’s career as the Federal Department of Narcotics targets her, led by federal agent Jimmy Fletcher (“Moonlight” star Trevante Rhodes) with whom Billie eventually had an affair.

Daniels knew the singer would be effective, but didn’t realize Day was going to be able to pull off all she does on the film. “It was a combination of her trusting me, her chemistry with Trevante and her passion for Billie Holiday,” the director, best known for “Precious” and “Empire,” told Georgia Voice.

Daniels’ primary goal was doing justice to Holiday and giving her her due as a civil rights leader. “As we were doing the film, it didn’t really dawn on me until halfway through the film that we could say she was a civil rights leader,” he admitted. “I looked at her as a strong black woman who was determined to live in her truth. Trevante and Andra later on said she really did kick off the civil rights movement as we know it to be.”

Rhodes admired the fact that she was her own person. “She was so unapologetically herself. She stood up to the FBI,” he said. “A lot of people have problems standing up to their bosses. That was eye-opening and invigorating to me.”

“The United States vs. Billie Holiday” feels especially relevant now, as law enforcement comes down on the singer just for singing her song, “Strange Fruit,” which protests the lynching of Black Americans. “Since the beginning of Black art when we came over here on the boats, slaves were singing on the boats, saying we’ll get through this to have better days, and that is essentially what we’re doing with the film,” said Rhodes. “We’re talking about the life of someone who did that. I go back and forth from being discouraged to being encouraged about where we are in the world. We’ve been saying this since we got here.”

The film hints at Holiday’s bisexual identity. Natasha Lyonne plays Tallulah Bankhead, a woman with whom Holiday was rumored to be lovers.

For Daniels, who is gay, it was important to show the truth about her relationships with both men and women. “I happen to be gay, but even if I were straight I’d want to tell this. She happened to like women, and people don’t necessarily want to see that, especially Black people, in their heroes. But heroes are everybody. Superheroes come in all shapes, colors and sizes.”

Miss Lawrence, who has worked with Daniels on both “Empire” and “Star,” received a phone call from the director almost three years ago as Daniels was starting work on the movie. “He sent me the script and told me he thought I could be Miss Freddy,” says Miss Lawrence. “He thought it would be a good fit. When I read through it and then read all about Miss Freddy, I thought the same thing. I thought it was a great story to tell.”

Miss Freddy was Billie Holiday’s dresser and very close friend and confidante. According to Miss Lawrence, they did everything together — they did drugs together, they prayed together, they cried together. “Miss Freddy was no stranger to rebellion. Miss Freddy had several run-ins with the police and law enforcement because Miss Freddy refused to conform to what society says a man should look and act like. Miss Freddy always acted out of her own instinct and because of that I helm her as a hero, someone that came long before the gay liberation movement, who dared to be brave enough in this fragile and confused world.”

The character’s strengths resonated with Miss Lawrence while preparing for the role. Miss Lawrence has a long allegiance and dedication to the culture of women, in particular to Black women. “My mother was the first person to fully accept who I was and told me it was okay just to be.”