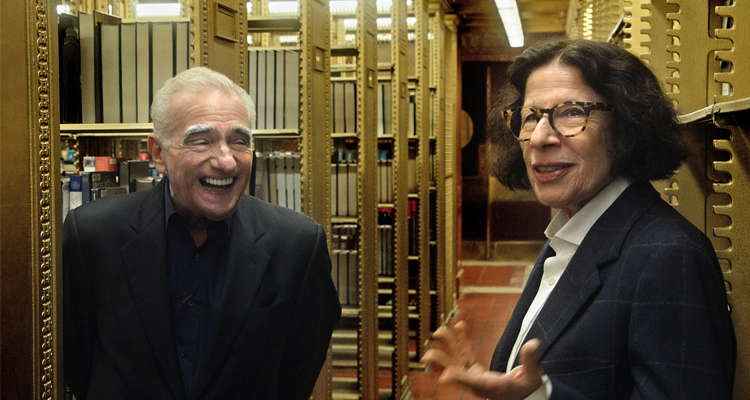 "Pretend It's a City" streams on Netflix.

I say “Pride” into my remote, and Xfinity tries very hard to engage or even grab me.

The screen displays five tiles: L, G, B, T, and Q. Click on a tile, you find a great many selections, some quite satisfying. It would be a shame to let this queer moment pass in the blink of an eye.

I came up with some interesting stuff. Generally, Xfinity hands you over to a third-party app, such as YouTube, Amazon or even Tubi. But you can drill down and down for music, movies, TV series, podcasts, etc.

Somehow, I found “I Am Not Your Negro” (2016, Netflix, Amazon Prime). The incomparable James Baldwin is by turns elegiac and then furious in this documentary. He wrote the manuscript that became this film, and he wants people to know about oppression, how its corrosiveness seeps into every part of life, and the toll it takes daily.

There is some amazing spliced-in movie footage not seen since the ’30s and ’40s. We see Baldwin lecturing at Harvard and debating a Yale professor on the very existence of discrimination on “The Dick Cavett Show.” He is unequivocal when he says “I did not become a Black Panther nor join the Nation of Islam, because I did not believe all white people were devils.”

Lily Wurst, soon to be Aimee, has done her duty to the Fatherland by birthing four sons. She is the wife of a decorated officer, and she dates high German officers while her husband is away at the Eastern front. Suddenly, a young woman named Felice is brought into her life by the vagaries of war. The hopelessly smitten Aimee: “All I had in mind was Felice and her wonderful perfume.”

Much later, Lily learns that Felice is Jewish. Lily nearly turns her out. But they can’t do without each other. They stay together day and night.

When they return from a lakeside bathing trip, the Gestapo is waiting. Deadly unpleasant. Felice (Jaguar) tries to bolt, but she is caught. Lily goes to Gestapo headquarters the next morning and asks after her woman, sealing Felice’s fate.

We see Lily in wartime and then in 1999. She still holds the memories of the two of them as the best life ever offered, and apparently has had no lovers since.

“The Watermelon Woman” (1996, Showtime) put Black lesbian filmmaker Cheryl Dunye on the map. Some great storytelling about a 1940s Black actress and what her life, including racist challenges, was about (warning: Cheryl says, “She isn’t real. I made her up.” Some people insist(ed) that they’ve heard of or actually seen the Watermelon Woman).

“Check It” (2016, Tubi) tells the story of a group of D.C. trans teens from the streets who’ve banded together for protection and family. They played this film at our Out on Film festival a few years back.

“The Death and Life of Marsha P. Johnson” (2017, Netflix) should be seen by every queer and all allies, so that life in the cold days can make us appreciate our current times and places, even the darker ones. Coming Out: The LGBT Cultural Revolution before Stonewall is another important bit of history swirling.

“First Dates: The Most Awkward, Adorable and Funny Moments” (2019, UK, clips are on YouTube) includes an Asian lesbian, looking comfortably butch, on a date with a femme in a posh London restaurant. The butch lesbian’s companion explains why she recently had a relationship with a man. Why go there? “It was totally on the rebound! I ….”

“So, you fell backwards onto a dick?”

In the same restaurant, there’s a transgender woman on a first date with a cisgender man. She states her truth, and his toothy grin widens.

It’s a relatively modest film. Some of the accents are awfully thick, but I certainly loved the dyke who complained, “I don’t know. You go out on one date, and they want you to go to Ikea with them, to move in together!” (This is apparently a transnational phenomenon … just saying).

The “Queer” tile also serves up some other great stuff, including “Screaming Queens: The Compton’s Cafeteria Riot” (2007, Netflix, Amazon Prime), a documentary covering the riot and what led to it (you can read my column detailing the life of the riot and its aftermath online).

The “gay” tile has a few interesting choices. I just had to see “The Celluloid Closet” again. Worth the $3.95 rental. There’s also a documentary on Vito Russo (who wrote “The Celluloid Closet”). The splashy Hollywood and Hollywood-ish movies are all here: “Frida,” “Victor/Victoria,” “Blue is the Warmest Color,” “As Good as It Gets,” “Brokeback Mountain,” “The Hours,” etc.

“The Bold Type” (2017, FreeForm) may be dismissed as a trio of gal pals who are a lower-rent “Sex and the City,” but one important difference involves the fact that the character Kat is Black, and she begins a relationship with Adena, an out and proud Muslim lesbian artist. They split up, but Kat formally comes out and gets with other women. Two dykes on one show! Imagine.

“Chavela” (2017) is a documovie about the life of Chavela Vargas (1919–2012) She was a tequila-drinking, gender nonconforming person who had more lovers than Carter’s has pills. There are home movies here (unseen until now) of her with Frida Kahlo at Frida’s home, Casa Azul. As an ex of hers says, Chavela “was much more than a great love. So much more. She was a vital experience that transcended everything.” Good enough epitaph for anyone, no?

“In Now You Know: The History of LGBTQ” (2019, Ellentube), Wanda Sykes breezily presents Queer History in five cartoon minutes. There’s an ahistoric moment, but I did not know about August 31, 1512, in Florence. Apparently, it was the very first Pride march. Who knew?

“Pretend It’s a City” (2021, Netflix) a fun New York series with the one and only Fran Lebowitz dishing to beat someone’s band. Love me some of this quintessentially acerbic New Yorker. And yes, a lesbian. In uniform.

“All hail Pose” (2019–2021, FX). The first 20 episodes are on Netflix. I revisit from time to time season 2, episode 6 (2019), where Billy! Fucking! Porter! sings what Judy Garland immortalized with 24–carat heartache: “There’s nothing sadder than a one man woman, looking for the man that got away.”

Billy rips the song to pieces and queerly stuffs it back together: “A one man man, looking for the man that got away.” He performs this in a hospital AIDS ward, and his audience consists of men we saw early on in the AIDS epidemic, bruised and broken, somehow clinging to life. The men gratefully accept his love offering (and Porter absolutely rocks that silver lame, long-tailed, forever tux).

“In P.R.I.D.E. — a Very Gay Documentary” (2019) you get to see and hear Marsha and Sylvia recounting Stonewall and making a place for themselves as “T” people. It includes gag-inducing moments from “documentaries” made by established news entities of the early/mid-’60s. And then there’s Harvey Milk. And Harvey’s assassination and the night of the protest riot. Clinton and DADT, plus the unbelievable “Defense of Marriage” Act. The Stonewall 25 march (I proudly attended). Ellen’s coming out. Matthew Shepard and Ellen speaking for him. Lawrence v. Texas, leading (eventually) to same-sex marriage. And then the stats re: the realities, officially and not, in other countries, vis a vis queer life.

In episode one of “Sense8” (2015–18, Netflix) you meet Freema Agyeman (best known from Doctor Who) as Amanita and her trans girlfriend Nomi (Jamie Clayton) as they fuck each other’s brains out, strapped and all. And as fearless computer lionesses, they are central to much of the ensuing action.

“Star Trek: Discovery” (2017, Paramount+) has a gay male couple, one of whom is the gorgeous Wilson Cruz. There are trans-galactic, trans-species, and trans-shipboard conflicts, but the two men try to get back to each other — despite Cruz’s character having been murdered and somehow revived.

“Station 19” (2018–, ABC) includes lesbians, gays, and hets living, loving, firefighting, and dealing with patriarchal/racist crap. One recent episode had a quartet of trans women who needed saving — and the burly Black queen who’s a volunteer firefighter carries her sister out of the burning building. Yes, please.

FX has a created number of entertaining, historic, and useful vids, but their piece de resistance is the six-episode “FX PRIDE Docuseries.” It presents six different decades (1950s–2000s) crafted by six different queer filmmakers. This stuff is by turns riveting, exhausting, elating, enraging. They impart knowledge and bodies and theory and historic perspectives, which bring us to the present day.

Other local Pride content worth checking out includes the ZAMI NOBLA podcast, Marci and Ginger’s Meak Productions, Inc. podcast, and videos, online stories, and podcasts from the Counter Narrative Project.