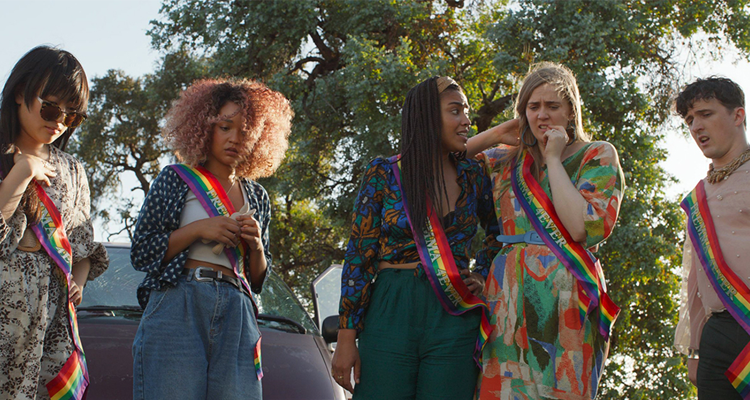 A favorite at film festivals this summer and fall, the new horror movie, “Sissy,” is now playing on Shudder. Directed and written by Hannah Barlow and Kane Senes, it’s one of the most original motion pictures you’ll see this year.

A character-driven project, its lead character is Cecilia (Aisha Dee), a successful media influencer with more than 200,000 followers. She and Emma (Barlow) were tween-age BFFs who made wishes that they are going to grow old together and never let anyone or anything interrupt their friendship. That changes, though, when Alex (Emily De Margheriti) enters the picture and an incident occurs.

Twelve years after their childhood years, Cecilia runs into Emma, who invites Cecilia to her bachelorette weekend before she marries her girlfriend. Said weekend is in a cabin in the mountains, where the weekend does not go as planned. What neither Alex nor Cecilia realizes is that the other will be there. Another of the weekend guests is a disabled gay man played by Daniel Monks.

“Sissy” may not have the hype of the recent queer thriller, “Bodies Bodies Bodies,” but it’s every bit as good. It’s also blessed with a wicked sense of humor.

The idea arrived at the director-writers in many ways.

“On a personal level, [I’m] still dealing with the mental health effects of being bullied as a child and also looking at how children are being bullied online today and the mental health associated with living online and how that is affecting our dopamine receptors and changing the way our brains work and being fascinated by all that,” Barlow told Georgia Voice.

The obsession with social media is one of the film’s themes.

“Living behind a façade on social media is like a Band-Aid,” Senes said. “It stops you from having to go back and fix or address those traumas, because you are able to project this perfect vision of yourself for the world to see. It’s a clashing of issues we thought.”

The film came together as Senes and Barlow were living in Los Angeles in 2018 and Trump had been inaugurated.

“There was a feeling in the air that you can get away with anything you want these days as long as you paint the right picture of yourself online,” Senes said. “We were having a lot of discussions about the concept of self-accountability and being able to recognize what you’ve done to others and where you’ve gone wrong in your life instead of blaming everyone else.”

A social media influencer in Australia somewhat inspired the project.

“Belle Gibson wrote a book called ‘The Whole Pantry’ and she took advantage of the cancer community in Australia by faking cancer, and she eventually got called out,” Barlow said. “She made a lot of money doing that, and we based Cecilia on her and tried to get in her shoes as we were writing.”

De Margheriti was eager to join the project after reading the script.

“I thought it captures the era we live in with social media and the whole dopamine hit we get when we are on, specifically Instagram,” she said. “I thought it was a lot of fun, which is kind of messed up of me to say, and it was very nostalgic in a way, especially with all the elements of the best friend necklaces. It took me back to when I was a teenager.”

When Alex realizes that Cecilia has joined the weekend, she has to make a tough decision.

“I think my love for Emma and my loyalty is so big I enable Cecilia to be there,” De Margheriti said. “My friends and loyalty to them and my quest for popularity in that moment is more important than sending her away.”

Barlow strongly identified with the character of Emma.

“I think a lot of women do, with the people-pleasing aspect of our personalities,” she said. “We are demanded by society to be people pleasers and that can permeate in toxic ways, especially in relationships with other women. We are taught to lie from a very young age. She presents as a good listener and friend and mediator, but if she was actually honest with herself and Cecilia it would be a different film.”

Senes said that the filmmaking pair set out to take many of the films they loved growing up, like “Mean Girls” and “Bridesmaids” and infused that with horror films such as “Carrie” and “Halloween.” He likes movies that are technically horror, but are fun, where the audience might be rooting for the character they shouldn’t be.

“Sissy” is now streaming on Shudder.