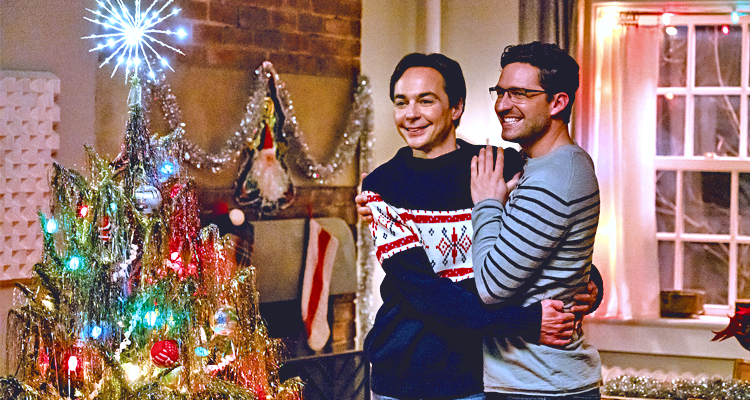 Michael Ausiello met his future husband Kit Cowan at a bar one evening and the two men spent 13 years together before Kit got some devastating news. He had cancer and eventually died in 2015. During that time, Ausiello — an entertainment journalist — had been providing regular updates on social media. An editor saw those posts and convinced Ausiello to write the best-selling memoir, “Spoiler Alert: The Hero Dies.” The book has been turned into the new film, “Spoiler Alert,” starring Jim Parsons as Michael and Ben Aldridge as Kit.

The author learned while at a Barnes and Noble that the book was becoming a film — literally moments before he and Parsons were set to do a Q&A.

“Parsons’ husband Todd Spiewak, who runs a production company with Jim, mentioned they were interested in optioning it and he dropped that bomb literally before we took the stage,” Ausiello told Georgia Voice. “I was already on a high because it was the week the book came out and I was excited to talk about it, but what a confidence booster to get news like that.”

Dan Savage and David Marshall Grant have adapted the book into a screenplay.

It was important to have gay performers as leads. Parsons was on board right out of the gate. “He let me know he was interested in acting in it. That was a dream come true. I am a huge admirer of his work. Then it was about finding Kit and all of us were on the same page about finding a gay actor to play [the role]. With Ben we hit the jackpot.”

Getting to see the film for the first time was surreal.

“It is very hard to get a movie made, I have now learned,” Ausiello said. “[What I first saw] wasn’t the finished movie, but still it was a movie, and it was a miracle that it got made.”

In the new film, “Darby and the Dead,” the titular character (played by Riele Downs) is able to see dead people after surviving a near-death experience. She now counsels local spirits and has to help out Capri, the most popular girl in high school, after an unfortunate accident.

“Darby” is directed by Silas Howard, and one of the supporting cast members is Nicole Maines, an actress (“Supergirl”) and transgender rights activist. She auditioned for the role of Capri and didn’t get it, but the producers liked her so much they wrote the role of Piper for her.

“It turned out being perfect, because her comedy and that kind of deadpan sarcasm is how I talk and joke every day,” Maines told Georgia Voice.

Being an activist is important for Maines.

“It’s no secret we are living in a time when trans rights are under attack like never before,” she said. “Now that [legislators] know we exist and are prevalent in media, this is someone [they feel they] can take action against. [The increased representation] has put us in a vulnerable position, but it is important we do this. We still have more support than ever, and it is easier to be a trans person, especially a trans child. Now people are familiar with what it means to be trans.”

Trans women used to be talked about in ways that would elicit disgust, laughter or fear, Maines said, and that is something she feared when she came out to her parents.

“All you could find at the time was negative stuff,” she said. “Now there is a different understanding; parents are not thinking their child is going to be Buffalo Bill [from ‘Silence of the Lambs’].”

Howard is known for high-profile projects such as “Pose,” “Transparent,” Netflix’s “Tales of the City” and the film “A Kid Like Jake.” A trans director, he has made it a mission to focus on positive, groundbreaking LGBTQ characters.

“I grew up in the AIDS era and we had to make everything ourselves,” he said. “I did 15 years of work before making ‘Transparent.’ I broke into TV, but TV broke into us as well. The kids are queer these days, with all the definitions of that. It’s phenomenal to see. I feel honored to work on shows such as ‘Pose’ and ‘Transparent’ and ‘Dickinson’ and a lot of bold decisions who make that all happen.”

“Spoiler Alert” is now in limited release and opens December 9

“Darby and the Dead” is now streaming on Hulu