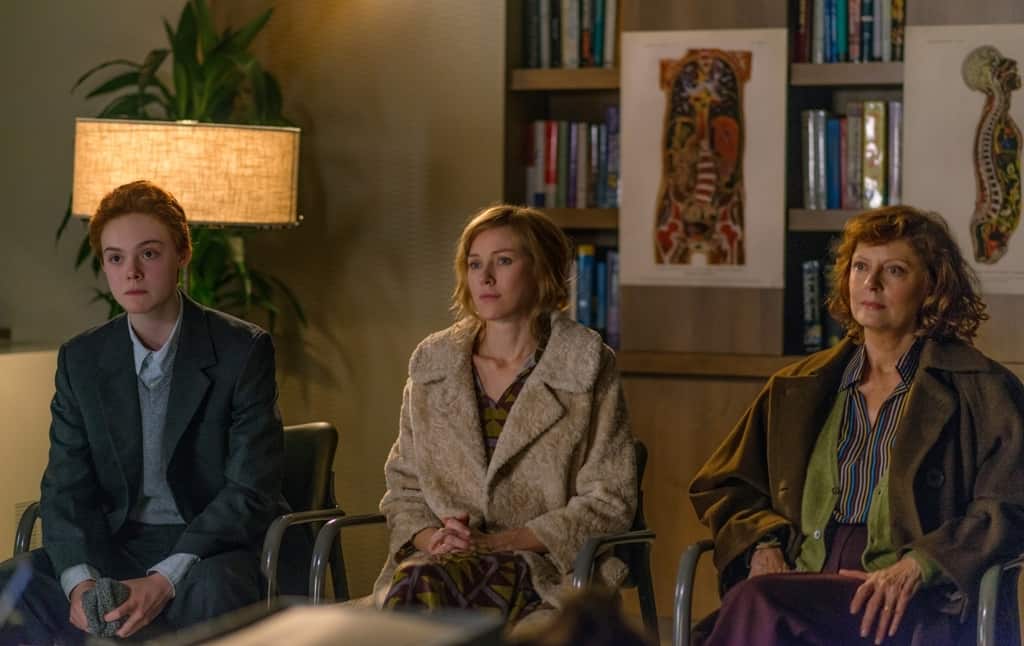 It has three gifted, bankable actresses – one playing a trans teenage boy, another a lesbian – but even the likes of Elle Fanning, Naomi Watts and Susan Sarandon can’t allow the new drama “3 Generations” to fulfill its potential and tell the story that it should be telling.

In Gaby Dellal’s long-delayed film – opening May 12 in Atlanta – the titular trio are living under one roof in New York. Fanning stars as Ramona, who – long realizing he is a boy – is transitioning to Ray and starting hormone replacement therapy. As he says to almost everyone around him, he just wants to be normal. His mother, Maggie (Watts), is tracking down Ray’s biological father (Tate Donovan) to persuade him to sign the paperwork needed since Ray is a minor. Meanwhile, Ray’s lesbian grandmother, Dolly (Susan Sarandon), can’t understand why Ramona/Ray can’t just be a proper lesbian. Frances (Linda Emond), Dolly’s long-time girlfriend, is beyond tired of having the entire family in one home.

When it screened at the 2015 Toronto Film festival under its former name, “About Ray,” the film bowed to a poor reception and caused its distributor, The Weinstein Company, to pull it from a theatrical release just three days before it was supposed to open. It’s nice that director and co-writer Dellal and The Weinstein Company believed in the project enough to play with it and add some scenes, but it’s still lightweight and underwhelming.

Dellal and co-writer Nikole Beckwith have been working on this for several years. Their commitment is admirable, but it’s a poorly written film with clunky dialogue.

Fanning has emerged from her sister Dakota’s shadow over the years and become one of her generation’s boldest actresses. Luckily, she has gravitated towards independent fare more than superheroes. It’s debatable whether or not Fanning brings it off physically, but emotionally, Fanning captures the essence of what Ray is going through. Sarandon is her usual fiery self. Even when her character is trading wisecracks and wading through inane dialogue, she has an earthy appeal.

Not faring so well is Watts, who flounders a bit here in an underwritten role. Maggie is much less interesting than the other characters. A subplot involving her ex and his brother is unnecessary and lifeless. Sadly, it often overshadows the story of Ray/Ramona. The story of Ray’s transition and the difficulties involved are glossed over for sudsy family drama.

Despite some sharp performances, “3 Generations” is a lightweight and mostly joyless experience. One character whines, “I’m not having a shitty day; I’m having a shitty existence.” There’s a reasonable happy ending here, but it feels unearned and misplaced.

The film’s R rating – later changed to PG-13 – raised some eyebrows initially since there is nothing really warranting that rating. The film has also been meet with some criticism from the trans community for its casting of a cisgender actress in the role of a trans male character.

That’s a valid point, but the film has some graver issues. “3 Generations” certainly means well, but isn’t deep enough or courageous enough to make much of an impression.