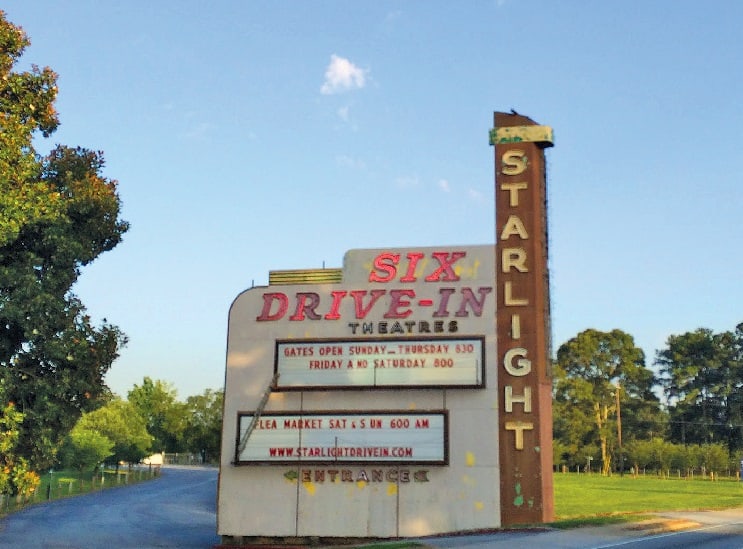 The Starlight: Keeping Atlanta in the Dark Since 1948

Morgan Fletcher
Culture
September 27, 2018
At dusk all across America, people pile their families in the car to go to the movies. These are not the movies you have to walk through the mall to get to; these are the movies that became a symbol of the American Dream and are now quickly on their way to becoming an American memory.
Drive-in theaters rose to popularity during the 1950s reaching about 4,000 locations nationwide. When you think of America and the ’50s, those large, beautiful, boat-like cars come to mind — plenty of room for your nuclear family to get comfy and head out. Interestingly enough, the first sign of the decline of the drive-in was the gas crisis of the 1970s. Families began to trade in the Bel-Airs and the Thunderbirds for the less comfortable, fuel efficient, and hideous models —  think the Chevy Nova and Pontiac Ventura. Simply enough: Why would you sit in your uncomfortable car, when you could sit in the plush seats of the theater? The second hit to the industry was the rise of the multiplex. Access to multiple movies at various times throughout the day was something in which most drive-ins were not able to compete. To combat these changes, many drive-ins shifted from the family night out toward a venue to anonymously watch slasher movies and a variety of not-so-family-friendly films.
Despite the changes, The Starlight Drive-In on 2000 Moreland Ave. has not only thrived, but has maintained its place in Atlanta. First opened in 1949 with a single screen, the Starlight, through a series of metamorphoses, is not going anywhere. In 2013, the Starlight upgraded from the traditional film projection to digital, again adapting to the changing film industry. Seven nights a week, on six screens, the Atlanta community can climb into their car to experience this classic pasttime.
Ready for a night at the Starlight? This is what you need to know: Adult tickets are $9; children ages 5–9 are only $1; those under five are admitted free. Your admission includes the double feature of the night and spots are first come, first serve. The Starlight no longer uses the metal speakers that you had to prop on your window, so a working FM radio is an absolute necessity.
As of 2016, there are only 336 operational drive-in theaters left in America. My childhood is littered with the memories of sitting on top of my mother’s car, watching a movie. Thanks to the Starlight’s continued efforts to change with the industry, my own children will gather some of these memories too.