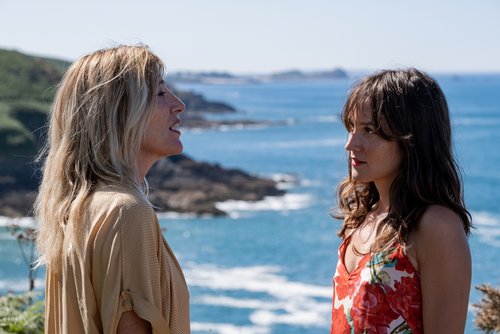 Films Not to Miss – ‘Anais in Love’ and ‘White Hot: The Rise and Fall of Abercrombie & Fitch’

A hit at last year’s Cannes Film Festival, the lesbian-themed “Anais in Love” is now in theaters and about to premiere On Demand.

In director Charline Bourgeois-Tacquet’s charming new film, the titular Anais (Anais Demoustier) is a 30-year-old woman who is having issues with her current lover.  She meets another man she is attracted to but then falls for his lover Emilie (Valeria Bruni Tedeschi) as well.

The story does not come from the director’s own life, but she and the character share a lot in common.

“She has a wide variety of choices ahead of her, but she has not settled on a specific vision for her future, whether it is the sort of relationship she wants to engage in or the kind of pace of life she wants,” Bourgeois-Tacquet said.

Meeting Emilie is a big shift for Anais.

For the character of Anais, this is the first time she realizes she can be attracted to another woman.

“This is not something she has foreseen or had occurred to her before,” Bourgeois-Tacquet said. “What was important to me is because of her absolute dedication to her desire, when this arises in her this is something she allows instantaneously. She doesn’t ask herself questions of becoming – of whether she is becoming a lesbian or becoming bisexual.”

The only scenes she rehearsed and choreographed beforehand were the dance scene and the love scene. This was important for her since she was intimidated to film the love scene between the two women.

The new documentary “White Hot: The Rise & Fall of Abercrombie & Fitch” is now streaming on Netflix. Directed by Alison Klayman, it’s an exploration of the retailer, which was known for its sexy models and in-your-face marketing campaigns in the ‘90s and early ‘00s – as well as its LGBTQ appeal. Over time, though, the company became involved in scandals, involving what was alleged to be discriminatory hiring practices. “White Hot” features interviews with former employees and models as well as outside parties.

One of those is out Ben O’Keefe, who – at the age of 18 – petitioned against the company and called for a boycott, upset that Abercrombie & Fitch didn’t offer clothing for plus-sized individuals.

“I first saw it in middle school when a girl walked by with a bag with a hot guy on it,” O’Keefe said. “At the time, I could not wear Abercrombie if I wanted to; it was too small for me. Also, it was too expensive. Flash forward years later to when I am 18, I find a quote from the former CEO Mike Jeffries (who is gay) where he said he didn’t want plus size people wearing their clothing. He was asked if he was being exclusionary, and he said absolutely.  It changed my life – I said to myself, it’s been all these years, why has no one done something about this? Then I realized I am someone. I can do something about this. I brought this problem to a head in what was a viral movement.”

He did not expect to have such a reaction.  He had no idea what he was doing initially, Googling how to write a press release, looking up reporters’ names and emailing them until the messages did not bounce back.

When O’Keefe first met with company executives, Jeffries did not attend. When Jeffries skipped that meeting, it became hard for O’Keefe to believe anything would happen with the CEO in leadership.

“Abercrombie today has made some change, and I am happy to see any brand become more exclusive,” he said. “For me, though, I believe it’s one thing to repair your image and another to repair the harm done. If you look at their corporate site and their leadership, you see one executive of color. You’ll see no longer even a chief diversity officer like they used to have.”

O’Keefe was approached a few years ago about the project and was skeptical at first. When he heard that Klayman was attached, though, he was a go.

“Anais in Love” is now playing at the Landmark Midtown Art Cinema and On Demand May 6.

“White Hot: The Rise & Fall of Abercrombie & Fitch” is now streaming on Netflix.