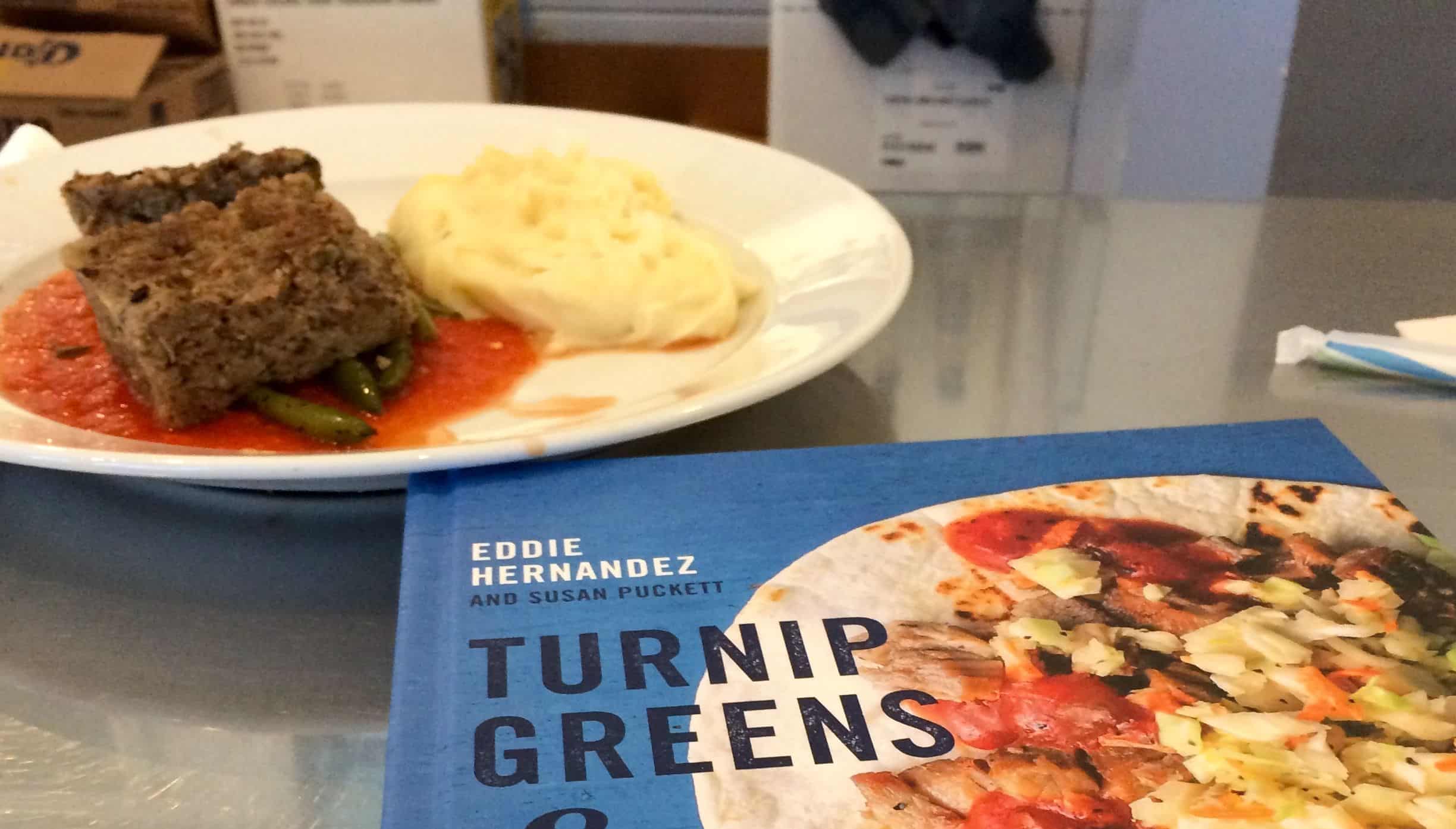 My favorite lunch spot is Taqueria del Sol on Cheshire Bridge Road (2165 Cheshire Bridge Road, 404-321-1118, www.taqueriadelsol.com). I’ve been going there since the early ‘90s, when it first opened as Sundown Café. Chef/co-owner Eddie Hernandez brought a break-through cuisine to the city: a hybrid of classic Mexican, Tex-Mex and, most originally, southern cooking. The dish that earned him immediate national attention was his turnip greens, which he cooks Mexican-style in chicken stock with tomatoes and chilies instead of the ham-hock-infused broth my mother and generations of other Southern women used.

Now, those turnip greens have lent their name to a cookbook, “Turnip Greens & Tortillas,” authored by Hernandez and Susan Puckett, former food editor at the Atlanta Journal-Constitution. The book will be released on April 10 and has already caught national attention, including an endorsement from legendary French chef Jacques Pépin, whose cover blurb says it all: “Eddie Hernandez cooks my type of food — honest, thrifty, and full of flavor — using fresh, inexpensive and ordinary ingredients.”

The 320-page book is mainly recipes, of course, but it also tells Hernandez’s surprising story. Born in Monterrey, Mexico, he learned to cook from his grandmother and, when he turned 15, he bought a car and opened a torta stand. But his main passion in his teens was music. He started a band, Fascinación, with friends and they moved to Houston when he was 17, hoping to land a recording contract. That didn’t happen, but Hernandez spent the next decade banging drums and holding day jobs in factories and restaurants. Then, in 1987, he moved to Atlanta and got a waiter’s job at El Azteca, south of the city in Mcdonough, owned by Mike Klank. He soon became chef, and his oddball blend of southern and Mexican cuisines attracted foodies (including me) from all over the city. Then Klank and Hernandez opened their first restaurant on Cheshire Bridge. Now, there are five Taqueria del Sol locations, including one in Athens.

What is so compelling about Hernandez’s cooking? After a few years in Texas and Mexico, I was constantly craving good Mexican cooking when I returned to Atlanta in 1986. Back then, it was basically all Tex-Mex joints like Taco Bell, although a few authentic taquerias soon opened on Buford Highway. I understood that Atlantans had not developed a taste for things as simple as chicharrones (pork skins) stewed in salsa verde or my most loved carnitas. Hernandez’s cooking, whether intended or not, introduced many to his grandmother’s cooking, but tweaked enough not to frighten the Southern palate. It’s not terribly spicy. He folds barbecued pork into a tortilla with zippy cole slaw and places fried chicken cutlets over mashed potatoes spiked with a red chile sauce. Last week, the special was meatloaf. I’m not kidding when I say that Hernandez’s version, not greasy and topped with ketchup, is the first I ever tasted that didn’t repulse me. I love the slightly piquant shrimp-corn chowder.

If by some bizarre chance you have never visited Taqueria del Sol, let me explain a few things. The main menu is tacos and enchiladas. Every week, there are three specials — a taco, a blue plate entree and, evenings, there is also a seafood plate. Lines are typically long at all locations, but move quickly. Here’s a tip: You can often avoid the line by going directly to the bar where parties of one or two are welcome. Tip decently, for god’s sake.

If you’re feeling adventurous, get the cookbook. The great majority of the recipes are easy to follow, thanks in great part to Susan Puckett’s skills. It’s also a chance to read an inspiring story. Did I mention Hernandez was mayor of a small Mexican town for a while? The man is kind and gifted in ways few are.