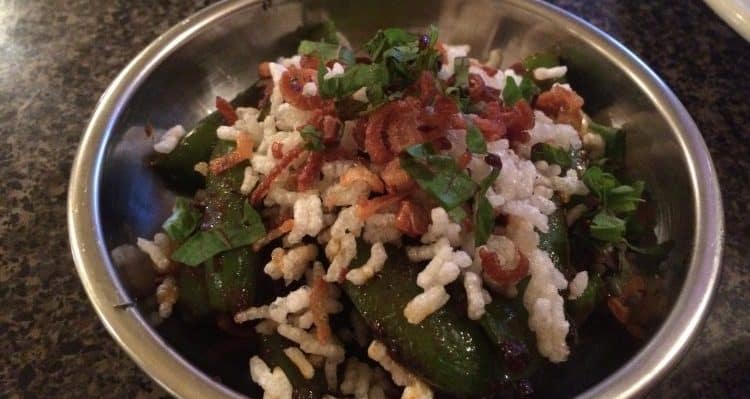 A lot of what we assume is appropriate spiciness in ethnic cooking in particular is overstated. Think about it. You go to a Thai restaurant, for example, and say that you want your food “Thai-spicy.” After a couple of bites, your lips feel like a ring of fire, you are crying and your nose is dripping onto your plate. The reason is that the chef most likely has a pot of mild sauce that he dumps chilies into if you like it hot. That can obliterate other flavors.

All of this is by way of letting you know that when you go to the new Talal Market, you’re not going to be stuffing bumblebees in your pie hole. Talal (which itself means “market”) is a so-called pop-up restaurant that operates 6-10 p.m. Friday through Sunday inside Gato in Candler Park (1660 McLendon Ave., 404-371-0889). The chef is 27-year-old Parnass Lim Savang, who has already worked at a handful of the city’s best restaurants and his locally-sourced cuisine is going to stun you.

First, a warning: Talal’s location inside Gato means you’re going to be competing with a crowd for one of four booths or a seat at the bar. When five of us went last Friday, we couldn’t get a seat after 45 minutes and crept away to nearby La Fonda. However, when I went on Sunday with a friend, we scored bar seats immediately.

Talal’s menu, which changes regularly, includes only five apps and entrées and a couple of sides, all intended to be shared. There’s no alcohol served for the present, so BYOB. Whatever you do, order the coconut water. You’ll be served a whole, young coconut cut open at the top. It’s filled with the delicious sweet water that is naturally present before coconut milk is constituted. Sip it through a straw and you can also scrape the interior with a long spoon to pull out soft coconut flesh.

For my entrée, I chose sai ua samun phrai, a fat, herb-spiced sausage, sliced and served with mushroom broth for dipping. You can wrap the sausage in leafy greens with pickled celery or eat them with a sticky rice like you’ve never had before, served in a traditional Thai basket.

Our other entrée was a large bowl of tom yum pla. If you like the lunchtime give-away tom yum soup in Thai cafes around town, this version is going to blow your mind. It’s a hot and sour soup that is fish-based. Its red snapper has no funky evidence of overcooking. There’s also lemongrass, gingery galangal root, Thai green chiles, oyster mushrooms, cilantro and its spicier cousin, culantro. The layers of flavor in this soup are astonishing and, yes, it’s pretty damn spicy.

Unfortunately, the restaurant’s dessert, made with a fermented rice ice cream and lime zest, was sold out. Unfortunately, too, Talal doesn’t accept reservations. You have until September to savor Chef Savang’s breakthrough cuisine. Go.