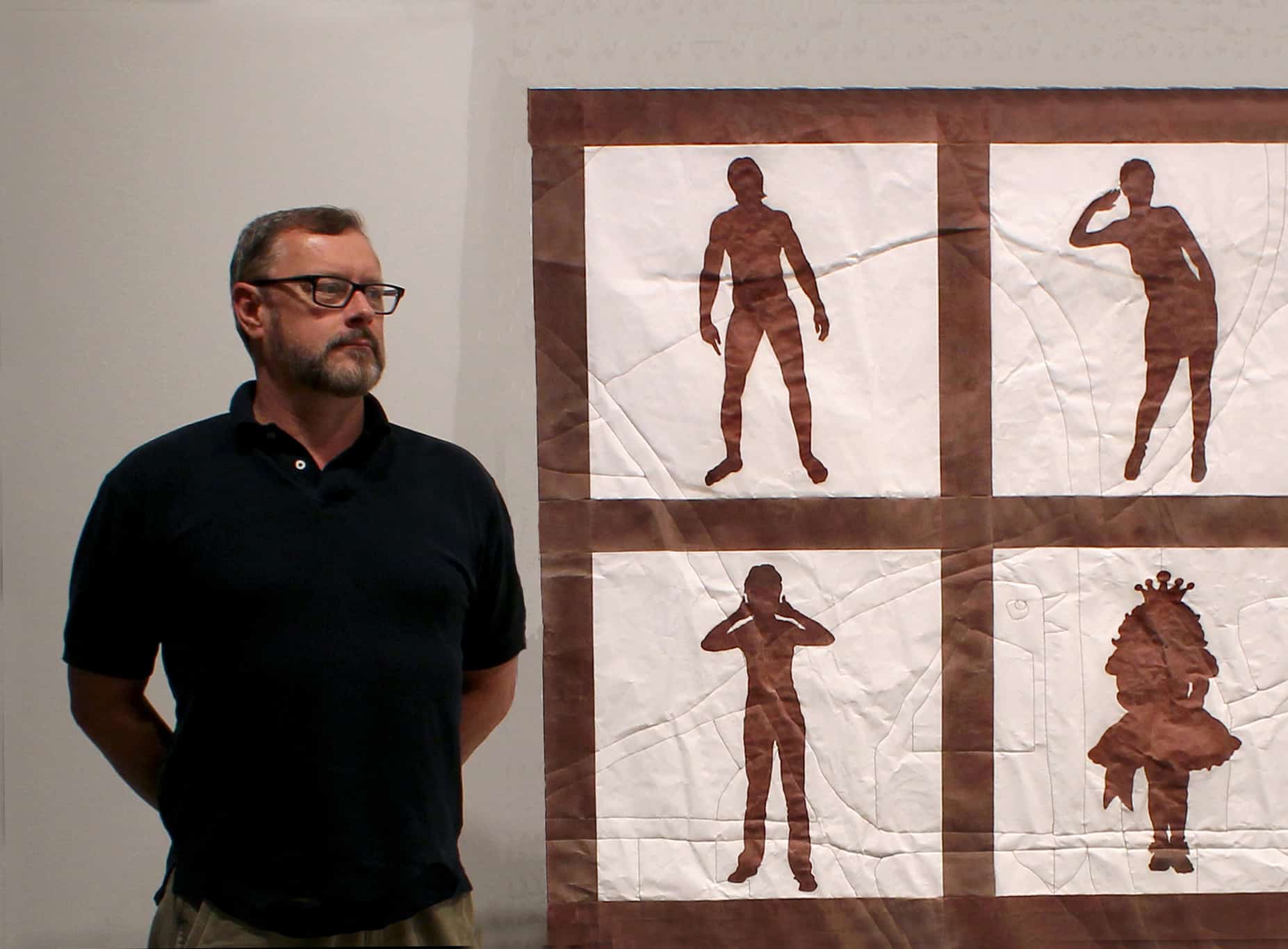 It’s easy to understand both people’s admiration and their shock when they look at Robert Sherer’s latest artwork. Currently on display in Kennesaw State University’s “Hearsay” exhibit, Sherer’s piece, titled “Heirloom: I Know Where The Bodies Are Buried,” may not catch one’s full attention until after learning how it was made, notice his attention to detail and hear the story behind its creation. 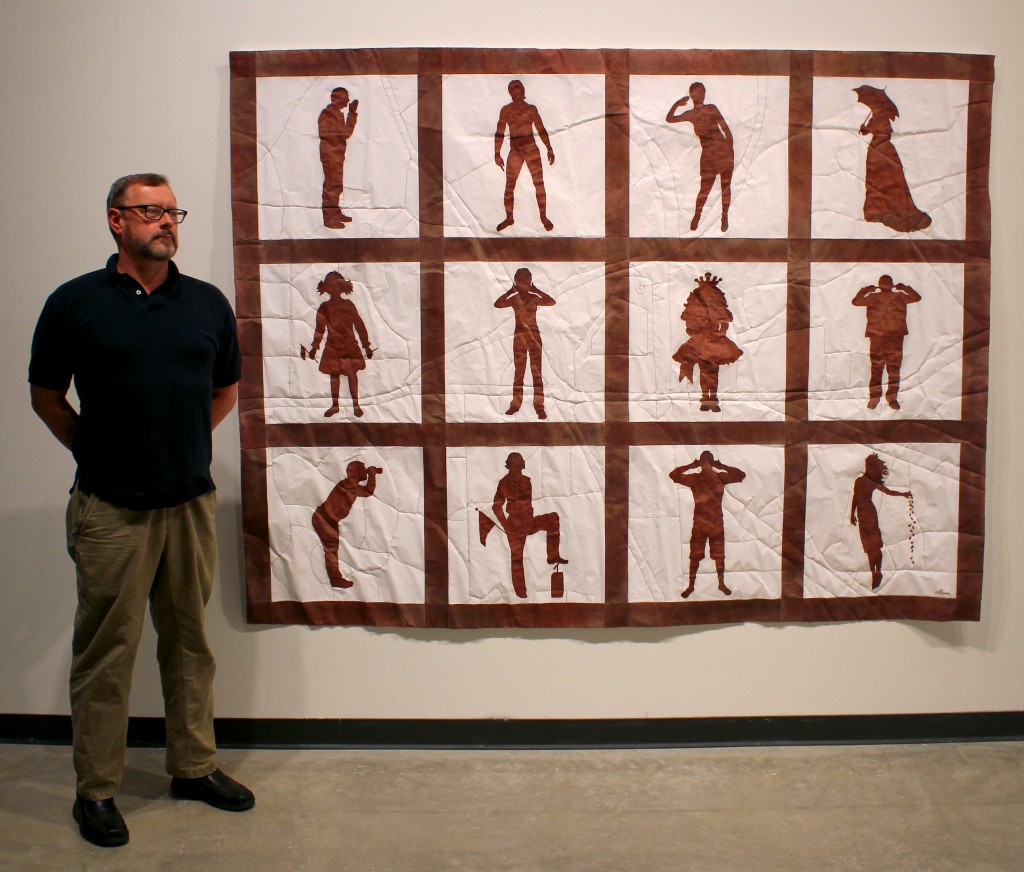 The work is a 6-foot by 8-foot quilt with a pattern of silhouettes, arranged in a checkerboard, displaying various examples of local gossip from here in Marietta. And if the idea of seeing people’s “dirty laundry” isn’t intriguing enough, finding out the paintings on the quilt were made completely from blood should be more than enough to captivate and even disturb some viewers.

The intricacy of the silhouettes, made of blood and printed on a beautifully hand-stitched quilt, causes a feeling of amazement and unease, but Sherer is all too familiar with the controversy his artwork has been known to cause.

Having lived in various major cities across the country before settling in metro Atlanta in 2004, Sherer, who is openly gay, is a world-renowned artist, featured internationally before becoming an Associate Professor of Art at Kennesaw State University.

Sherer talks freely on everything from art to sexuality to race and it is easy to discover an abundance of compassion he has behind the controversial work.

Taking strong dedication and nearly nine months to complete, “Heirloom” (or “the blood quilt” as it has been called) was one of Sherer’s biggest challenges but it has also been among his most rewarding pieces as well. Devoting his time solely to its completion for three-fourths of a year, other gigs were placed on hold in order to make sure the message he wanted to convey with this piece was seen through.

JonBenet Ramsey murder inspiration for ‘blood quilt’
The moment that initially sparked the conception of this piece was when Sherer learned that the body of JonBenet Ramsey, a nationally known child pageant star who was brutally murdered in 1996, is buried here in Marietta.

This set Sherer off on a journey to find out more; not only about Ramsey, but all of the secrets this area may be holding. And to complete this project, Sherer did everything from engaging in local gossip to find other leads on subjects to include in this art piece, to researching cemeteries of the subjects he found, even learning to sew in order to stitch the quilt.

When asked the significance of blood in the work, Sherer says he wanted something that would fully encompass the area.

“I tried to make the quilt highly specific to Marietta. All of the research that went into its making was conducted in Marietta by locals,” he says. “It is made of materials found in Marietta, including the blood of Mariettans. It was sewn together [locally] and the quilting pattern is a map of the town radiating from its epicenter.”

Sherer has used blood in other works as well. In aboriginal cultures, he says, blood is used as a decorative product in art. As with “Heirloom,” the blood he uses is always specific to the place in which he’s working and it helps to authenticate his work to have a connection between the piece itself and the blood used in it.

Using blood as a medium isn’t the only unconventional way Sherer expresses himself. When asked about the controversial nature of his work in general, he says coming from his small, conservative hometown of Jasper, Alabama—where things are often kept quiet if they are outside of the status quo—he has always wanted his audience to have the opportunity to connect and express themselves freely when looking at his work. But Sherer made it clear that it was and is never his intention to cause controversy with his art; he simply does.

‘Heirloom’ exceeds expectation
Describing himself as a “lone wolf,” Sherer does admit that this project would never have been completed without the hard work and dedication of four local individuals: Janice and Taylor Cox, John Bohannon, and Terry Stevens—all of whom worked tirelessly and at no charge in order to help in the completion of “Heirloom.” Grateful for the help he received, Sherer says, “I think [the quilt] exceeded my own expectations, because it is pretty stunning.”

All in all, Sherer says, despite the nature of the quilt, the overall reception of it has been positive, and there hasn’t been much opposition either to the creation of the quilt or its exhibition. He says he believes this is one of his more satisfying creations, based on the positive feedback he has received from the community, and he hopes the exhibit will continue to draw crowds and get people talking.

When he is not creating his latest masterpiece or teaching art, Sherer is diligently working to endow the Robert Sherer GLBT Scholarship. First introduced in 2008, this scholarship will help benefit self-identified gay, lesbian, bisexual, or transgendered art students at Kennesaw State University. Currently, the scholarship is $9,000 away from being endowed, but Sherer is hopeful that funding will be raised within the next two years to aid students.

DETAILS
Robert Sherer’s ‘Heirloom: I Know Where the Bodies Are Buried’
On display at Kennesaw State University’s ‘Hearsay’ exhibit
Through Oct. 25
zuckerman.kennesaw.edu
www.robertsherer.com