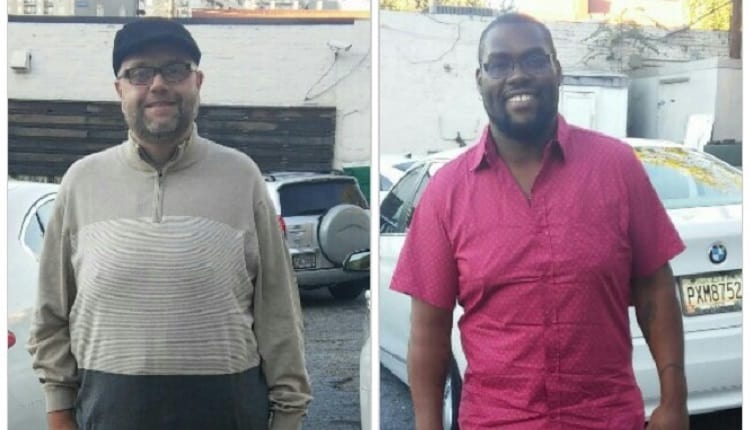 Gay Atlanta couple Jason Wright and Johnny Collins are going to sweat it out together as they appear on the March 15 episode of the A&E show “Fit To Fat To Fit.”

The show has an interesting concept based on a question many trainers face: how can you understand how difficult it is to lose weight when you’ve always been fit? “Fit To Fat To Fit” addresses that question by having the trainers gain weight, then lose it back with the client.

Wright and Collins applied to be on the show about a year ago after seeing an online casting call, but their eagerness came with a healthy dose of fear about putting themselves and their bodies out there like that on national television. For Collins, a preacher’s son, part of the fear had to do with his sexuality.

“It was scary because I knew the weight that I carried was directly tied to my fears and emotional struggles with the inability to reconcile my faith with my relationship with my mother, which is great except for the fact that her son is in love with another man,” he tells Georgia Voice. “The fear of talking about that on national TV and knowing my mom and all my family would see me being completely candid about that was paralyzing at times. But the only way for me to break through the physical weight was to shed the emotional weight. Sounds so cliché but going through this process made the connection between the two crystal clear.”

It helped that their trainer, Trammell Smith, would be trying to lose weight alongside the couple. Smith gained 67 pounds in four months for the show (see picture at left) just to lose it back in front of the cameras.

“We were initially shocked that he would do that,” says Wright. “I mean, this guy had 8-pack abs and was fit.  So, for him to voluntarily gain weight shocked us both.”

Training started last June, with the couple going from not working out on a regular basis to working out five or more days a week—a process Wright called “grueling.” And they had to run extra laps whenever Atlanta traffic reared its ugly head and they were late to the gym. But soon enough, they started to see results from the workouts and healthy dieting.

“Tramell worked us hard and within a short period of time, I was reminded that I had a collar bone. For the first time in a long time, I could honestly see it! Then, I started noticing that I could feel my tailbone when I sat down, my pants would no longer stay up without a belt, and shirts were too large,” Wright says.

Weekly weigh-ins continued as the three challenged each other to keep going.

Wright started the show at 312 pounds and dropped down to 249 by the end and he’s happy to report that he has continued to lose weight since then, with a goal of 220 pounds. The weight loss is even more profound when you consider Wright weighed 457 pounds at one point before undergoing weight loss surgery. Meanwhile, Collins started out at 308 pounds at the beginning of the show and went down to 240, with a similar eventual goal of 220 pounds.

“One thing we both said right off top is that we never wanted to be skinny or even slim. Both of us are bear built,” Collins says laughing. “I love being thick and I like my man thick too, but there's thick and then there's one Krispy Kreme away from a heart attack. We had to make sure we'd stick around for each other and also it was about feeling good about ourselves when we look in the mirror and walk out the door, not being too tired for work or fun. Enjoying a nice walk after dinner or taking the pups for a stroll is not half the task it used to be.”

There was another, ah-hem…"perk" to the experience as Collins points out.

“We've also learned that sex is way more exciting when you subtract a combined 140 pounds from the equation and add some muscle, that's all I'm gonna say about that!”

The experience on “Fit To Fat To Fit” inspired Wright, Collins and Smith to set up a charity benefit walk called the Perimeter Challenge to bring awareness and raise funds for childhood obesity in Georgia. They’re gathering financial support for the event, which they plan to occur in late summer or early fall. More details will be released soon.