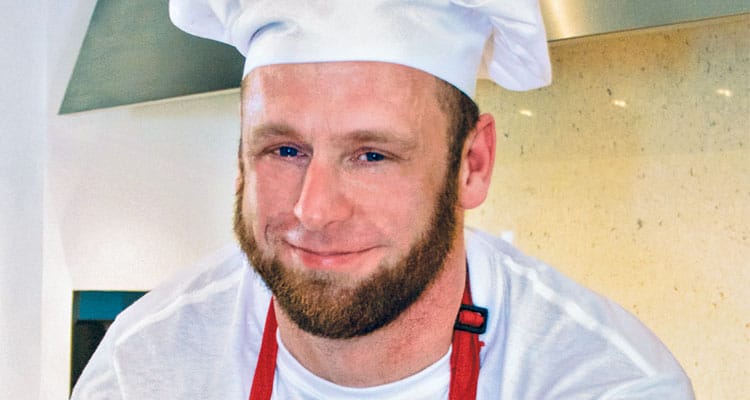 If there were any doubt about the saying “it’s never too late to start over,” Bill Armstrong is here to erase it.

The gay Atlanta man went into recovery for drug and alcohol addiction at age 37 and quickly found an unlikely outlet to cope with the transition.

“It was during the first few months of being sober that I started baking,” he says. “That was what started it for me. It was very therapeutic.”

He soon shared his sweet treats with friends, and enjoyed the positive response. Over time he got to thinking, why not be a baker? He had no food service background or professional culinary training, but he was passionate about baking and he could do it on the side along with his full-time job as an IT consultant, so he would still have an income coming in. Later, who knew what could happen?

So, in May 2013, he started Burly Bakers, a mail-order bakery. Now, with great word-of-mouth, a successful Kickstarter campaign, a Facebook following over 10,000 strong, a forthcoming partnership with a national retailer and orders continuing to come through, Armstrong is glad he pursued the path he did while enduring such personal turmoil.

“When I did that, everything opened up,” he says.

‘Food has always been love for me’

While Armstrong didn’t start baking on his own until much later, the seed was planted early on. His mother was always baking and trying new things in the kitchen.

“I think because of that, food has always been love for me,” he says. “It’s always had a special connection.”

Through Burly Bakers, he’s been successful in recreating that connection for baked goods lovers throughout the country. It’s not something he takes for granted.

“I can’t tell you how many customers have contacted me describing the experience of eating the stuff I’ve created for them. I don’t think there’s anything else [but food] that can really create that bond with people,” he says.

The Burly Bakers tagline is “If you’re going to be bad, it better be good.” It’s a just-suggestive-enough style of marketing that’s gained serious traction, but for Armstrong it all goes back to the food.

Armstrong’s desserts are on display along with some other local eye candy in the Burly Bakers wall calendar, offered as one of the incentives for donating to the company’s recent Kickstarter campaign to grow his business.

The original goal was to raise $25,000 but in just 30 days over the summer, donations tallied nearly $30,000. With that, Armstrong was able to buy new cooking equipment. He hoped to be able to open up his own Burly Bakers storefront with the money, but filling the orders was more expensive than he calculated, so it’s just the equipment for now.

“But the exposure I got through that has been priceless,” he says.

It’s a good thing he got the equipment, because ever since he’s been busy filling the Kickstarter orders. He’s about 80 percent through with it, thanks to some additional helping hands, and looks to fill all the orders by Christmas.

In addition to the Kickstarter orders and new orders, a big step forward will occur in January, as Burly Bakers partners with its first national retailer. Lucky’s Market, a Colorado-based gourmet food chain with locations throughout the country, will begin stocking Burly Bakers pies, brownies, cookies and more in all of its stores. Armstrong says that while there are no Lucky’s Market locations in Georgia, they are looking to expand here soon.

Meanwhile, he’s gone from being a full-time IT consultant while doing Burly Bakers on the side to an even time split between the two. He has dropped half his IT clients, and eventually the goal is to do Burly Bakers full time.

For two of Burly Bakers‘ holiday recipes straight from Bill Armstrong himself, see below.

Thinly sliced apples, raisins and pecans are blended with sugar, cinnamon and nutmeg, then topped with a crunchy brown sugar topping.

Preparation
1. Preheat oven to 375 degrees.
2. Place sliced apples in a bowl. In another bowl, mix white sugar, flour, cinnamon, and nutmeg, then sprinkle over apples. Toss until apples are evenly coated. Stir in raisins. Spoon mixture into pastry shell, mounding slightly in the center.
3. Mix together 1/2 cup flour and brown sugar in a small bowl. Cut in butter until mixture resembles course crumbs. Add chopped pecans, then sprinkle over apple filling. Cover with aluminum foil and bake in preheated oven for 25 minutes.
4. Remove foil and bake for another 25 to 30 minutes until topping and crust are golden brown. Cool before serving.

This pecan pie can kick the molasses out of any other pie in the South, Armstrong promises. “After one bite, you’ll believe it.”