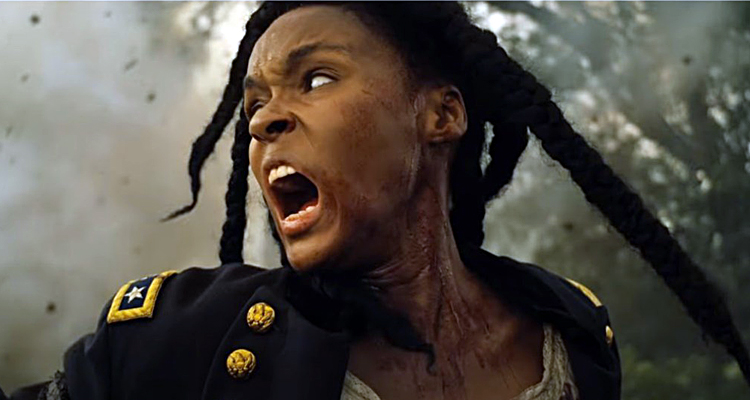 The new film, “Antebellum,” came about in an unorthodox manner. It started off with a nightmare that Gerard Bush had shortly after he and his husband Christopher Renz — co-writers and co-directors of the film — moved to Los Angeles from Miami.

“I think with anything in life, you can go through chapters that feel pretty overwhelming,” Bush said. “At that time, I was going through some upheaval personally as it deals with sudden deaths of loved ones in my family. Right prior to moving, my dad died suddenly, and I was having difficulty coming to grips with a lot of things relating to his death. I had this nightmare about this woman, Eden, and it felt to me that she was desperate to reach for help, that she was communicating with me across dimensions. I put it down in notes and the next day we had a discussion about it and we literally put pen to paper and made it into a short story. From that came the film.”

“Antebellum” stars Janelle Monáe as an author who is transported back in time to the Civil War as a slave. The duo did not write the film for Monáe, but eventually realized she was a great choice. “When names were thrown out, we said no,” said Bush. “We thought we’d go with someone that was undiscovered, that people were not familiar with so you could immerse yourself into this fantasy. But we were always fans of Janelle as an artist. She is such a dynamic performer. I remember seeing her at the Grammys — we were home — and she was, there was this quiet power that sold us on the idea she’d be a great.”

The film was released in September and immediately climbed to the top of the VOD charts. Renz and Bush missed the experience of being in theaters with their first feature film and talking directly to audiences, but one flip side was being able to reach so many homes and have discussions after virtual screenings.

Being gay, they said, obviously influences their work. “It’s impossible for two gay men to write something and not have it informed indirectly by our own experience,” Bush says. “We are always looking to amplify issues as it relates to having the audacity to live powerfully in the truth of who you are.”

The pair have two more projects coming up. One is the film, “Rapture,” and the other is the series, “Inkwell” for HBO Max.

One of the season’s most acclaimed films is “Two of Us,” Filippo Meneghetti’s drama about two elderly women — Nina (Barbara Sukowa) and Madeleine (Martine Chevallier) — who live next door to each other and have been romantically involved for years. They are discreet until they can’t be. After a splashy premiere at the Toronto Film Festival in 2019, “Two of Us” won awards at festivals last year (including Out On Film) and is now France’s official submission for the 2021 Academy Awards. It was scheduled for release last spring, but was delayed because of COVID-19.

The director is a fan of using metaphors to show what is going on inside his characters’ heads. “One day I came across a neighbor of a friend of mine in Verona, and there were two women who became widowed roughly at the same time and they would keep each other company, with the two doors always open, speaking from one apartment to the other,” Meneghetti recalled. “When I saw that, it clicked that it could be a simple, everyday metaphor to tell a story. I had in mind that the door always open is now suddenly shut. I wanted to tell that story in a simple beautiful way.” He worked on the film for five years, cowriting it as well.

Sukowa is an international movie star — “it’s scary the directors she has worked with,” Meneghetti laughed — while Chevallier is known more for theater. Since this was a low budget film, there was little time to rehearse. Yet the time the two women spent together before shooting shows. “I wanted the two actresses to be different, but I wanted them to have chemistry,” Meneghetti said.

He loves the give and take of the two characters. “Both of them are facing challenges in different ways. I was focusing on the dynamic of the two. Somehow through the film, Madeleine becomes Nina and Nina becomes Madeleine.

“Antebellum” is now available on VOD.
“Two of Us” opens in virtual cinemas on Feb. 5 as well as on VOD.