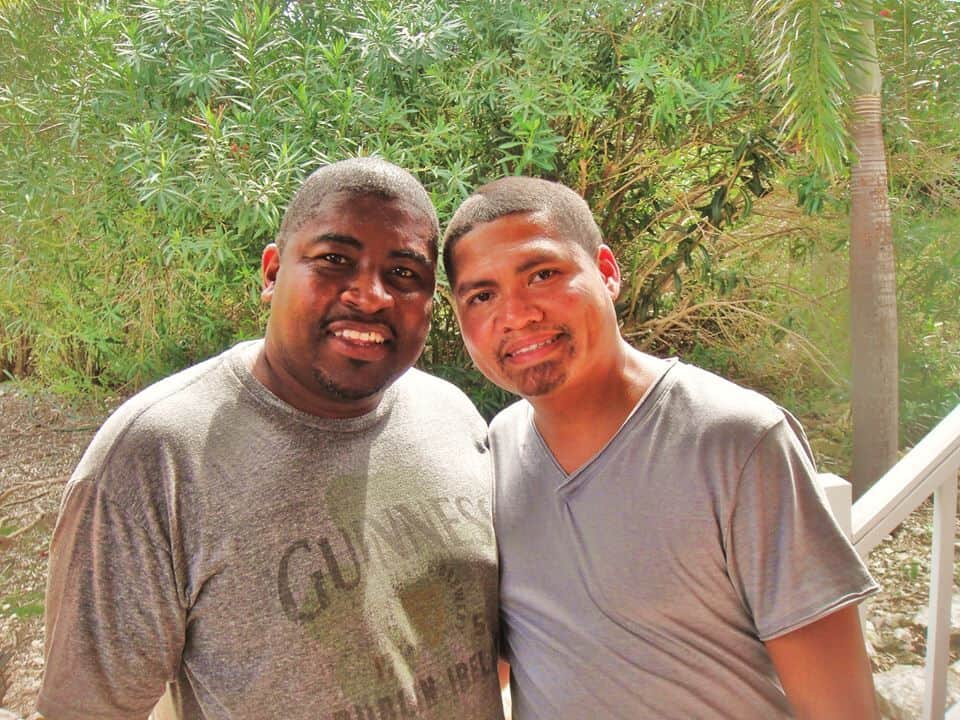 Gay marriage activists’ love is for the dogs, and cats, and more

As a child, Shelton Stroman and his fam­ily had pets. And when he was in college, he had a dog. But after his dog died, Stroman swore off pets.

“I was heartbroken. It was like losing a child,” he said.

But his love for animals remained and he quit a computer career to work at a veter­inary clinic as the practice manager where his then partner, now husband, Christopher Innis, worked.

“I met Chris and he was a vet and he had pets. I fell in love with his pets … and I went from working at a computer company to working at a pet hospital,” Stroman said.

Stroman managed the practice for eight years. Then, about five years ago, another company purchased the veterinary clinic. It was then that Stroman decided he wanted to strike out on his own.

He pitched his idea of a pet hotel and re­sort – an upscale boarding service – to Innis.

But after a night of crunching numbers and careful consideration, Innis was on board, and their business, Snellville Pet Re­sort, became a reality, opening up in 2011.

Stroman manages the business while In­nis, who works for Banfield Pet Hospital, serves as the resort’s doctor.

“I thought a pet resort was something that was missing in this area – most boarding facilities put pets in cages and there wasn’t a place as upscale,” Stroman said.

‘These pets truly are their kids’

Stroman said the facility offers 152 dif­ferent rooms, from a “standard suite” to a “penthouse suite” complete with a queen-sized bed. Some rooms are equipped with flat-screen TVs that stay on for the pets be­cause that is what they are used to at home, Stroman said. Rooms are also available for people with three or more pets.

During holidays, such as the Fourth of July and Thanksgiving and Christmas, the pets are treated to holiday meals complete with “pup dogs” or turkey and dressing. But the food is actually nutritional pet food made to look like human food, Stroman said.

“Chris is a vet so he makes sure the pets get appropriate foods,” he said.

Photos of the pets eating their holiday meal are then posted to Facebook so clients can see how they are doing.

Most pets boarded are dogs. There are plenty of rooms for cats, too, but oftentimes there are some open rooms. That’s when Stroman said his pet hotel makes room for some different kinds of pets.

Depending on the special instructions, Stro­man said he is able to board exotic pets. The oc­casional iguana is boarded, for example, he said.

“We usually get them during off days – because people with exotic pets most likely don’t have kids,” he said. “These pets truly are their kids.”

The strangest pet housed by Snellville Pet Resort, however, is a pot-bellied pig.

“We put hay down and take in a slop bucket. Lucky for me I was raised on a farm, so it was okay with me. The family came in and asked and I said, yes, we can make that happen,” Stroman said. “And they’re a re­turn client – they come in every two years.”

Finding a sense of community

Stroman and Innis, who have been to­gether for 15 years and married in May, were part of the Lambda Legal lawsuit against Georgia to bring same-sex marriage to the state. Innis was the lead defendant in the suit known as Innis v. Aderhold.

At home, Stroman, Innis and their son, Jonathan, 11, have a Jack Russell terrier named Haley, a chihuaua mix named Rocco and a gecko named Mister. “That’s Mister with a period,” Stroman said.

Their home is also a regular foster home for dogs and cats needing rehabilitation. As a vet with Banfield, which is housed in PetSmart stores, Innis is in regular contact with these animals – and he often brings them home.

“He doesn’t want to see a pet put down so he brings them home and we rehab them. He brings pets from everywhere,” Stroman said.

Opening and operating a pet hotel is just one way Stroman said he and his family contribute to their community. The family’s home is also a popular spot for neighbor­hood kids to hang out with their son.

“We want to feel a sense of community – that’s sometimes difficult when you are part of a same-sex couple,” he said.