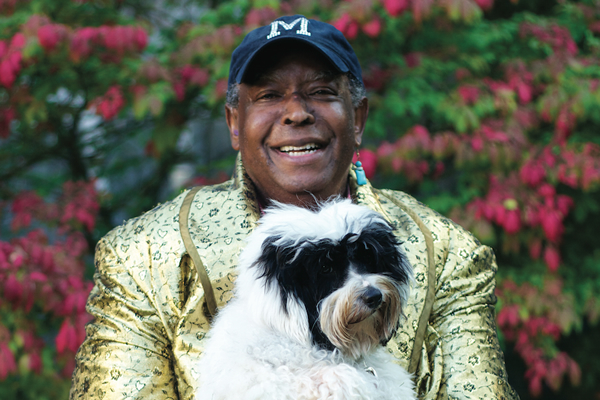 In our polarized era, few people are loved by everyone from millennials to boomers. Yet, it’s a safe bet that even Darth Vader has a soft spot for Fred Rogers, creator and host of the children’s TV show “Mister Rogers’ Neighborhood,” which ran on PBS from 1968-2001. (Rogers died in 2003.)

François S. Clemmons, the black, gay opera singer and actor, played Officer Clemmons, one of the “neighbors” on the show. He was the first African-American to have a recurring role on a children’s TV show.

The moment in 1969 when Mister Rogers, a white man, invited Officer Clemmons, a black man, to dunk his feet in a wading pool with him is etched in our DNA. In the aftermath of the assassination of Martin Luther King, Jr., it was a quiet, but radical, stand against racism.

“Officer Clemmons: A Memoir,” released in early May, is Clemmons’ honest, engaging account of his life. In it, Clemmons reflects on his experience as an abused child, encounters with racism, struggle with his sexuality, professional success and friendship with Rogers. The book is filled with warmth and love — for Rogers, music, his friends, colleagues, family and children. Yet, Clemmons doesn’t sugar-coat the difficulties he’s endured or the hard truths he’s learned.

The memoir begins with a letter that Clemmons writes to Rogers years after his death. Over the decades, Clemmons writes, fans have asked him questions ranging from “How’d you meet him? to “How did you get out of the television?”

These questions were one reason Clemmons wrote the memoir. Yet, there was another compelling reason. He’d read bios of Rogers, but after reading these accounts, he writes, “I concluded that … none of the other publications were authored by a black, gay, ordained person of the theater who had worked intimately with you (Rogers) for over 30 years.”

His friendship with Roger and his work with the “Neighborhood” were vitally important to him. Yet Clemmons’ life has encompassed far more than being a “neighbor.” Born in 1945 in Blackwater, Miss., he earned a degree in music from Oberlin College and a master’s from Carnegie Mellon University. Clemmons won a Grammy Award for his recording of “Porgy and Bess” and founded the Harlem Spiritual Ensemble. From 1997-2013, he was the Alexander Twilight artist in residence and director of the Martin Luther King Spiritual Choir at Middlebury College.

As a child in a racist Southern town, Clemmons watched as his father abused his mother.

“My dreams conjured up the dangerous kitchen knife that my mother used in her fight against my daddy,” Clemmons writes.

To get away from her abusive husband, Clemmons’ mother moved the family to Youngstown, Ohio. Because he was black, his high school guidance counselors discouraged him from applying to Oberlin.

“I learned about racial segregation well above the Mason-Dixon Line,” he writes.

In Youngstown, his mother remarried. His stepfather abused Clemmons. Clemmons realized he was gay.

“My family was a traditional Baptist, God-fearing one,” Clemmons writes, “And even before I understood what homosexuality meant, it was drilled into my brain that these (gay) men were wrong in the eyes of God.”

At Oberlin, Clemmons embraced his sexuality forming friendships and relationships with queer men both out and closeted. With his school choir, he sang in the Soviet Union. He was inspired when he met Martin Luther King Jr. when King spoke at Oberlin.

Rogers met Clemmons when he heard him sing at a church. Clemmons began appearing on Rogers’ show when he was a grad student at Carnegie Mellon. Rogers loved Clemmons as a friend and respected his talent. Yet, he was a product of his time. “If you’re gay, it doesn’t matter to me at all,” Rogers told Clemmons, “but if you’re going to be on the show … you can’t be out as gay.”

Clemmons stayed in the closet so he could continue to work with Rogers. He tried hetero marriage (it didn’t work out). Despite having to hide his sexuality, Clemmons treasured his friendship with Rogers, his spiritual father and mentor.

If you’re looking for hope, inspiration and grit, “Officer Clemmons: A Memoir” is the book for you.