I was really excited. What is this? 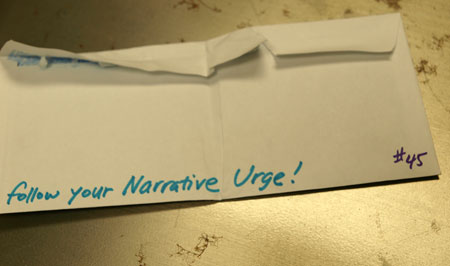 I ripped open the envelope, found the $10, and it looked real. 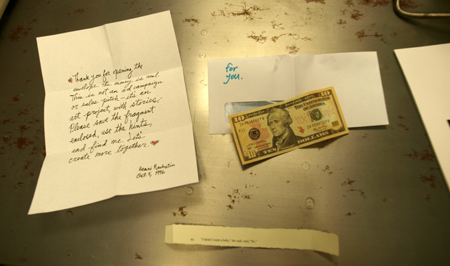 I opened the letter inside and it read, “Thank you for opening the envelope. The money is real. This is not an ad campaign or sales pitch — it’s an art project, with stories. Please save the fragment enclosed, use the hints, and find me. Let’s create more together.” 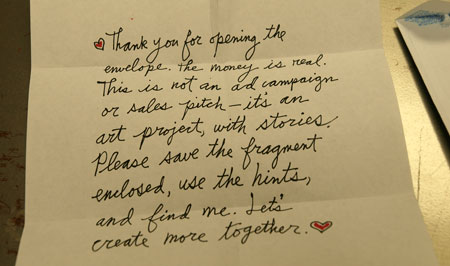 Oh, no. Is this one of those chain letters that were fairly popular when I was in middle school?

In the bottom right corner of the letter was this, “Henri Rechatin Oct. 5, 1996” 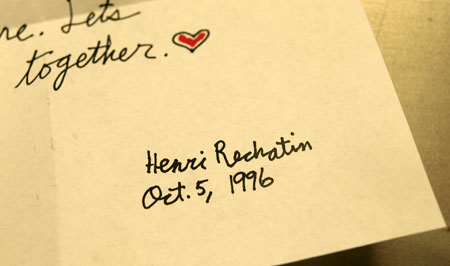 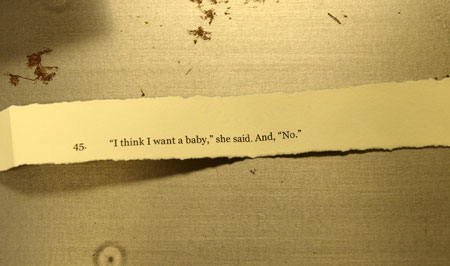 How amazing. What a great, intriguing and awesome art project. Atlanta, sometimes I really fall in love with you all over again.

I Googled “Henri Rechatin” and discovered he was an amazing daredevil famous for tightrope crossing of of the Whirlpool Rapids at Niagra Falls in 1975.

This is what he did, which is just plain crazy: “In 1975 he crossed over the Whirlpool Rapids on the cable of the Spanish AeroCar. His friend Frank Lucas rode a motorcycle, he, himself was balanced on a platform like device attached to the motorcycle, and his wife Jancyk was suspended from the long pole Rechatin carried across his shoulders.” He wanted to do it again, but park officials said nope.

And then there’s video of Rechatin when he was 66 years old on Oct. 5, 1996, balancing a chair off the top of a Russian hotel.

I then Googled something like “art project atlanta $10” and this link to Creative Loafing popped up.

Wow. The CL author reported receiving the same things in the mail, but with different clues. I’m even more intrigued.

First, kudos to the artist who came up with this idea. These kinds of projects are thrilling.

Second, I’m so fascinated how the project is apparently being snail-mailed to people, as well as being found in odd places (one commenter on the CL post found an envelope in the men’s restroom at the Flat Iron) and how modern technology — the internet, Facebook and Twitter — are being utilized to solve the mystery.

And, finally, who doesn’t love a mystery? They make for the best stories.