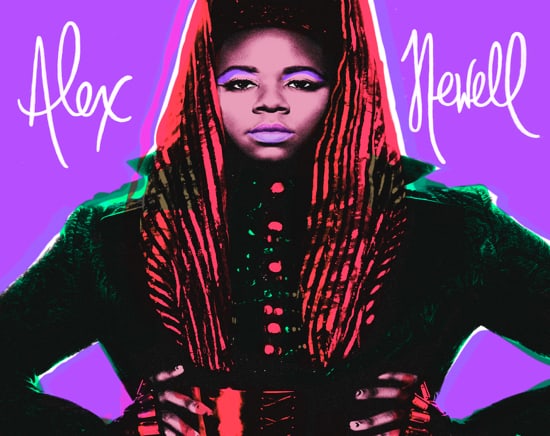 Maybe Alex Newell’s star-making moment – the “Dreamgirls” showstopper “And I Am Telling You I’m Not Going,” which the 23-year-old gloriously belted out on “The Glee Project” before nabbing a spot on Fox’s “Glee” – was meant to be. After all, as a fiery kid in church choir, Newell was not about to let some lesser singer steal any church-choir solos from him. To get his point across, he would scream “at the top of my lungs.” He would throw things. Until that solo was his, no, Newell was not going.

With a new EP, “Power,” to his name, Newell opens up about his reputation as a diva, being mistaken as transgender and his meltdown over nearly missing out on singing a “Sister Act” song.

Which church solo are you most proud of stealing?

What was that stupid song that I wanted… oh my god, yes! It was “Oh Happy Day” from “Sister Act.” I wanted that solo and they gave it to someone else and I was soooo livid. I was like, “She can’t even sing it! I can sing it so much better than her!” I remember yelling at my aunt in the sanctuary after everybody left and she was like, “You need to calm down,” and I was just like, “NO! I’m not gonna calm down. That solo is mine. I should have it,” and I got it. (Laughs)

Beyoncé – she’s one of your all-time favorites.

What is it about her? How does she inspire you as a performer / singer / fashionista?

What do you make of people who refer to you as a diva?

Sometimes it’s a compliment. But it doesn’t mean best in their craft anymore. It has this attitude about it, like “I’m a diva because I’m fierce at what I do” not because “I’m the best at what I do.” So, that bothers me a little bit. It doesn’t mean prima donna anymore; it means, “I can wear a leotard on stage and give a subpar show,” rather than, “I can get on the stage and murder everyone”– not murder everyone in the sense of killing them, but murder my performance and be the best at what I do.

You broke a lot of ground as Unique on “Glee,” which helped to start a conversation regarding gender and trans issues, both of which are now in the forefront. What does it mean to have been one of the first trans characters on television?

It was a great platform and such a great show, but to have a role come into your life that means something – that actually changes the way people view society – it’s just great. Just to know that I was a part of something that’s bigger than me makes it even better. Sometimes you get those roles twice, sometimes once, so I’m just happy I had mine so early in my career.

Did the show have you questioning your own gender at all?

I guess I’ve never really seen myself as a woman. Yes, I physically have seen myself as a woman, but when I think about 30 years in the future, I don’t see myself transitioning into a woman. I see myself as a gay male with my husband and my children and living that life. I guess that’s how I’ve confirmed it with myself, which could change. I don’t know. Who knows? I could have another cathartic self-discovery down the line.

You and Adam Lambert are touring, which has to be the gayest billing of the year.

No – it’s gonna be the gayest event of life. Two gays on the road! How fabulous!

What can people expect?

vocals and runs. We might just explode by the end of the night every day.

What about incorporating a Beyoncé cover? Which song of hers would you do?

I mean, I’m literally about to sing “Formation” wherever I go now because I just want to say (a la Beyoncé), “If you fuck me right, I’ll take you to Red Lobster.”

Do you eat at Red Lobster?

I’ve never been to Red Lobster a day in my life.

But you’ll eat there now?

Unless Beyoncé is there herself, no