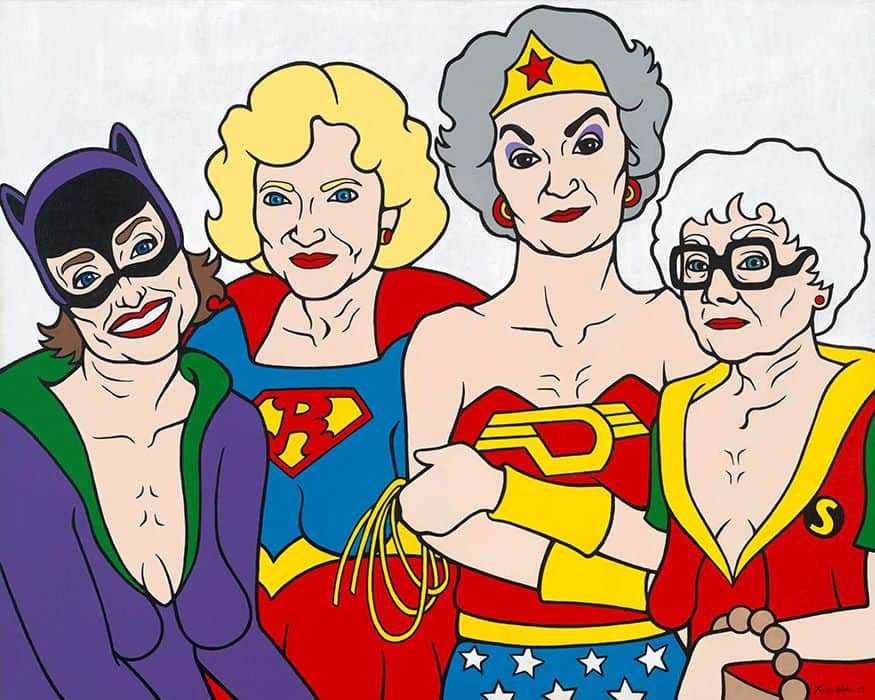 The Golden Girls. Frankenstein. And visual artist Trevor Wayne. What do these three figures have in common? They’re all gracing Dad’s Garage in March. Of course, only Wayne will be there in the flesh. The other two will merely be appearing in prints by the openly gay artist —but icons still retain their power, even in two dimensions.

Wayne will headline at a March 8 event titled “Art & Comedy.” The show will be held at Dad’s Garage, the long-running non-profit theater company, now at its new digs down on Ezzard Street. The “pop-up” show will feature Wayne’s signature remixes of pop culture aesthetic, jammed together with a cutting-edge sensibility that’s all his. That’s the art part.

As for the comedy: the event also features a local improv troupe, who will take inspiration direct from Wayne’s canon, for what the venue calls “an evening of improv jamz.” Naturally, Wayne’s work will also be purchasable, if any part of it piques the audience’s fancy. The evening’s festivities will also feature the Lotus Eaters Club. No flower-eating, of course: the group is an art collective who will be wielding permanent markers in a drawing-based battle royale.

Although Wayne now lives in Palm Springs, his creative trajectory began with a move to Los Angeles. Back in 2009, the artist crafted cosplay-flavored pop pictures of the four lead characters from “The Golden Girls.” The resulting image, “Golden Heroes,” was successful. It kicked off a retro-fueled mass-media-inspired series of works by Wayne. As a result, the artist’s freewheeling sensibility is now splashed across a large number of consumables. According to Will Dean of the Desert Outlook, the Wayne multimedia empire can be seen on “mugs, totes, lapel pins and prints, merchandise he sells through his website, TrevorWayne.com.”

Wayne said his influences as a pre-internet kid were cartoons. He grew up in a “very small town” where the arts watershed was dry: “I didn’t even know pop art was a thing.”

The artist said he wants to create “things that are fun” — he likes “art that makes a room feel lighter and brighter.” Personal space is important, he noted, “and when I invite people in, I want them to feel a positive energy.”

And then, of course, there’s the durable horror banana. It’s a Trevor Wayne trope. The long-bodied yellow fruit has a habit of appearing in the artist’s work — and even has its own subsection on his website. Wayne has inserted the eponymous food in his reproductions of famous horror scenes — here’s poor Janet Leigh in “Psycho” about to be stabbed by a banana; here’s the much-suffering Shelley Duvall from “The Shining” menaced by a golden piece of produce. What’s the deal?

Positive thinking, he said: “What you see around you affects you.”

Wayne explained that he used to be “a real horror junkie. At one point I realized I am so desensitized to blood and gore that maybe it was doing something to me on a deeper level. I decided to not surround myself with negative imagery anymore. It was a great decision and really changed things for me.”

However, he confessed, he feels like “a traitor to the horror genre.” His compromise was history’s first banana-infused monster mash: he created “a series of iconic horror classics where I took away the threat and replaced it with something so absurd (bananas) that they became fun and comical. Now I can appreciate all my horror favorites without the dark part of them.”

Wayne knows all about Lisa Frank, too.

“Her bright fun designs just floated around on Trapper Keepers and pencil cases with no reason or explanation, other than they were fun,” he said.

Indeed, he has his own ambitions in that direction: one day, he’d like to be on school supplies in every Kmart.

“Maybe one day 1st graders everywhere will have ‘Golden Heroes’ back packs!” he said.