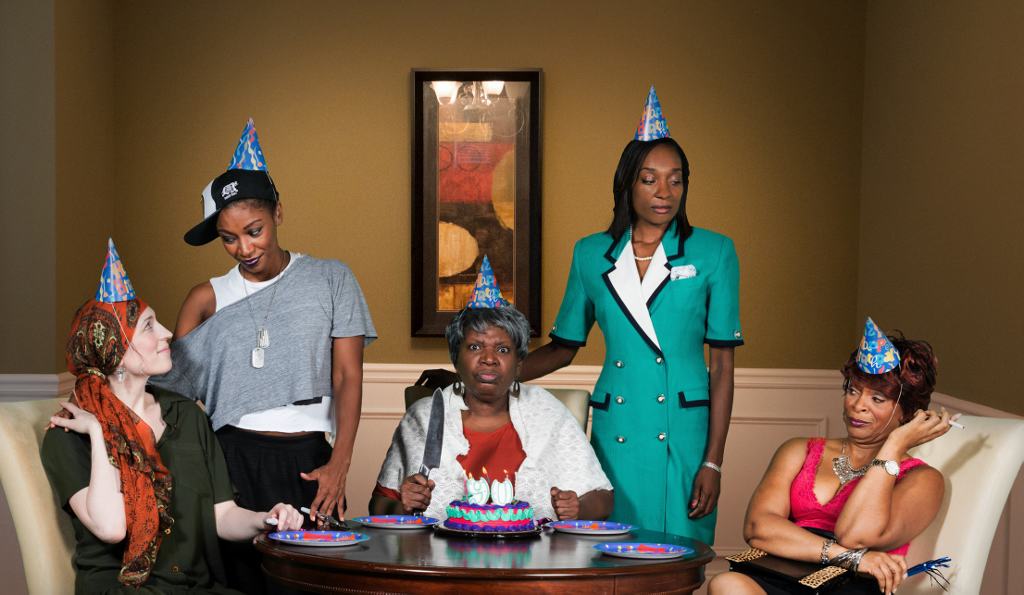 Fall theater in the ATL brings with it options galore. Two plums are Alliance Theatre’s “One Flew Over the Cuckoo’s Nest,” adapted into a play by Dale Wasserman from Ken Kesey’s book, which was later turned into an Oscar-winning film, and Dominion Entertainment Group’s “Jar the Floor,” Cheryl West’s comedy about an African-American family and a birthday party marked by some surprises, one of which is the great-granddaughter of the main character's new female lover. We caught up with actresses D. Woods (most recently seen in the film “Blackbird”) and Cara Mantella, who play “Jar’s” lesbian couple Vennie and Raisa, as well as Tess Malis Kincaid, who stars as Nurse Ratched in “Cuckoo’s Nest.” Ratched oversees the pysch ward, including new patient Randle McMurphy.

Georgia Voice: Tell us about your character, Cara.
Cara: Raisa is kind of the outsider of the group. She comes in as a friend of Vennie to her birthday party. The family reacts because she is white and also because she has had one breast removed. She had breast cancer and it is noticeable right away when she comes in.

How do you see the relationship between her and Vennie?
Cara: My character has been married and has a five-year-old son. When she developed cancer, her husband maybe wasn’t as accepting as he could have been. Raisa made a new friend in Vennie, who helped her find her life again. She takes her on an adventure, a new relationship, and allows her to be herself.

Georgia Voice: D., what is it like working with a cast that includes the great Bernardine Mitchell, who plays the family matriarch?
D. Woods: I had to ask her, “This was a long time ago, but didn’t you do a production of “for colored girls who have considered suicide / when the rainbow is enuf” at the Alliance a while back? She did. I was in the ninth grade and went to see that show. I remember her playing Lady in Red and her monologue terrified me. I told her recently how much she scared me. To be working with her now is going to be intense.

Georgia Voice: Tess, can you talk to us about being part of the ensemble of “Cuckoo’s Nest?”
I can say this. I felt lucky to get the call. When (director) Susan (Booth) reached out I was thrilled. As the entire cast came into play, I got more excited.

How does the play compare to the film version?
The audience is in the space with those people. There is no escape from it – they are all in the ward.  In the film you get the release from the inmates going on a fishing trip but the play, I think, has immediacy. It’s more visceral.

How do you approach the iconic character of Nurse Ratched?
I was excited but terrified when Susan offered me the role. When you say Nurse Ratched, everyone has an opinion of who this person is. I go back to the text and find who this woman is on the page. It’s important for me not to judge the character. I have to find out what motivates this woman and what her intentions are. As misguided and harsh as what she is doing may seem to audiences and the men experiencing it, it’s important to understand her. In her mind, she perceives what she is doing is right in order to maintain the order of the ward. She believes group therapy works; that in some cases shock therapy works; and at times lobotomy is necessary.