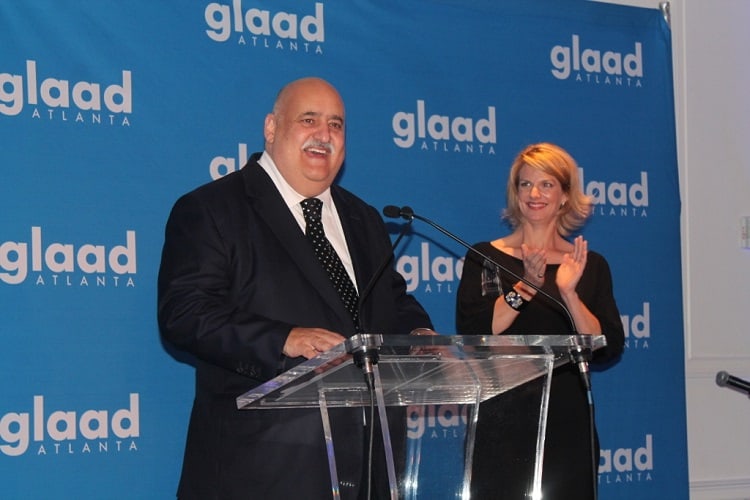 The ritzy event, held at The Estate in Buckhead, was sold out to a capacity crowd of 250 and drew a wide range of notable attendees including Michael Sam, the first openly gay NFL player to be drafted, The Weather Channel’s Sam Champion and his husband artist Rubem Robierb, actor Wilson Cruz (“My So Called Life,” “Red Band Society”), singer Frenchie Davis, comedian Fortune Feimster (“Chelsea Lately”), actress Kat Graham (“Vampire Diaries”) and actress Eva Tamargo (“The Haves and the Have Nots”).

Local LGBT activist Paul Horning was presented with the GLAAD Champion Award, and GLAAD President and CEO Sarah Kate Ellis recognized several other advocates in the news recently, including transgender homecoming queen Sage Lovell, anti-bullying employment non-discrimination advocate Brian Martin and Daniel Pierce, who was attacked by his family and kicked out of his home after coming out.

The night also included a tearjerking speech by anti-bullying advocates David and Tina Long, parents of the late Tyler Long, the Georgia teenager who took his own life in 2009 after years of bullying.

The event was also a launching pad for GLAAD Southern Stories, a new program the organization will use to build support for equality in the south.