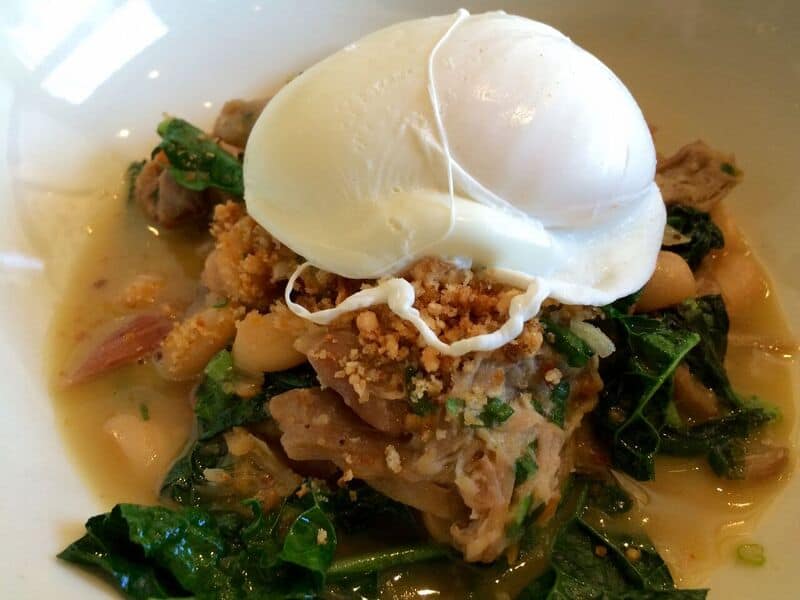 The good, the confusing and the absurd of Atlanta dining

Throughout my 30-year tenure as a nearly fulltime dining critic, I typically eat in restaurants four or five times a week. People always thought it sounded like a fantastic job. I always explained that critics eat more bad-to-mediocre food than good stuff. So it went during the last week or so.

Dish of the Week: That would be the brunch-time cassoulet at The One Eared Stag. I hadn’t visited this restaurant across from the Inman Park MARTA station in a couple of years when I brunched there on a recent Sunday with family members I hadn’t seen since I was a child. It’s not the quietest place to catch up, but Chef Robert Phalen’s brilliantly conceived cooking couldn’t be more absorbing.

Cassoulet is a classic French dish – among my favorites – featuring white beans and duck confit under a toasty topping of breadcrumbs. Phalen riffs. He scatters the crumbs, shreds the duck and then tops it with a fat poached egg whose yolk adds velvety texture. He also adds spinach leaves. Addictive. (1029 Edgewood Ave., 404-525-4479, oneearedstagatl.com)

Confusing Experience of the Week: Despite raves, I’ve never visited The Pinewood in Decatur. It’s best known for its craft cocktail program. I don’t drink and only two of my five friends who visited with me sampled and approved the booze. It was fun nonetheless to watch the bartender shake up his concoctions with more double-jointed force and drama than a Cirque du Soleil performer.

The food ranges from the mediocre to the very good. The double-patty cheeseburger with shamefully rich remoulade and bacon deserves its renown. Two of us divided it as an appetizer. An oyster roll is nearly as decadent. But my trout was disappointing. It was topped with shaved prosciutto country ham and thin-sliced olives and chiles. The fish, sitting in a pool of browned butter and shaved fennel, was seriously overcooked. A papardelle Bolognese earned an “it’s okay” from a tablemate. Choose carefully and you’ll eat well.

Absurdity of the Week: One of my friends works for a company that doles out employee awards in the form of discount coupons for Chili’s and Longhorn. After two visits to the latter, I refused to go again. But I was morbidly curious about Chili’s, which I had not visited since I lived in Houston in the ’80s. Oy. Nothing succeeds like very mediocre food pandering to the timid of palate.

Five of us visited the Toco Hills location. I’d been told by a friend that I would love the baby back ribs – “tender, slow smoked over pecan wood,” according to the menu. Several sauces are available – Pepsi, craft beer, and original.

When I told our (very entertaining) server that I couldn’t abide super-sweet bbq sauces, he suggested the original. It was of course cloyingly sweet. Thank God, I asked for it on the side.

Yes, the meat was falling off the bone, as it should be, but the dry rub was grimly flavorless. There’s no flavor of chiles at Chili’s. That’s not to say I didn’t clean the bones, but the alternative was eating the two sides that came with it – dreadful fries and a big pile of steaming broccoli. Who the hell serves broccoli with barbecue? (2133 Lavista Rd., 404-325-8680, chilis.com)