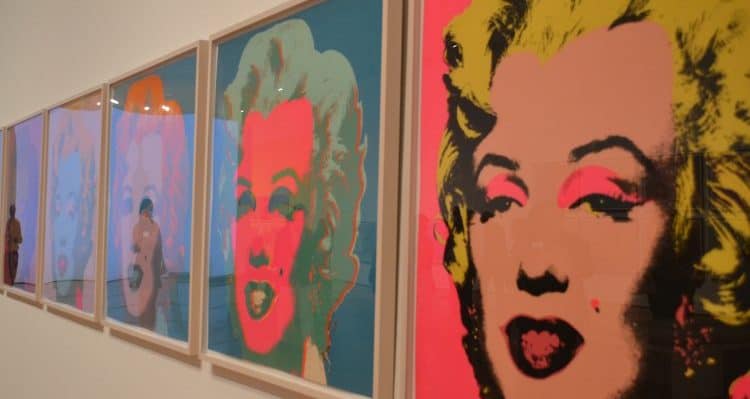 Is it possible to go to a grocery store and not think of the “Campbell’s Soup Can” print in the soup aisle?

Is it possible to look at the “Campbell’s Soup Can” on the wall of the High Museum this summer and not think about the effects the rise of consumerism had on the women’s rights movement of the 1960s and ‘70s?

Or, what about stepping behind the scenes of the Factory, covered wall-to-wall in shimmering silver foil and black-painted words meshing the political themes of post-Vietnam War America with those of the USA in 2017?

Those are some of the things Portland, Oregon, art collector Jordan Schnitzer wants visitors to think about as they take in the more than 250 works on display from his family’s collection of Andy Warhol pieces. The “sweeping retrospective,” which features a number of prints showcasing themes of Warhol’s life as a gay man, will be at the High through Sept. 3.

“It’s always hard to separate the artist from the person. And most artists, whether they’re visual artists, writers, poets, tend to do best when their work is about their experiences,” Schnitzer said. “Andy Warhol was gay and he, I think, began to realize that when he was young, high school, and that was a time when being homosexual was, in many states, against the law. And therefore one didn’t publicly, as we would say today, come out.”

Though he’s best-known for his serial prints featuring the late actress Marilyn Monroe and Communist Party of China Chairman Mao Zedong — both of which are centerpieces in the High exhibition, along with a series of Campbell’s soup cans and his commentary on capital punishment (“Electric Chair”) — a number of pieces in Warhol’s portfolio speak to his sexuality.

Toward the end of the exhibit walk-through, after the silver “Factory Room,” and away from the vivid hues of “Endangered Species” and “Flowers,” is a small room cordoned off with a warning of adult content. In this space is a set of black-and-white prints depicting the intimate details of two men engaging in sexual acts, along with a piece featuring a lesbian couple.

This is “Sex Parts,” and these pieces speak directly to Warhol’s life behind closed doors.

“I think they’re stunning, as is all of Andy Warhol’s work artistically,” Schnitzer said. “He was a master colorist, yet that series is black and white.”

Though it wasn’t uncommon for Warhol to create colorless line drawings, “Sex Parts” is rare for being a series done in grayscale.

“Andy Warhol was brilliant at using stunning colors, often to make horrific images — initially — look very pretty. Stop and look at the electric chairs — lovely pastel colors, so you stop and look. If you walk right by a piece of art, you can’t ever think about it, so he uses beautiful colors to get you to stop and look,” Schnitzer said. “In the case of the ‘Sex Parts,’ they’re beautifully drawn, very intimate … but they are devoid of color and I think he didn’t make them for the general public in the way his other series were made and shown in galleries. And maybe he didn’t need the mousetrap of using beautiful color to get people to stop and look at the art, because people who were looking at the ‘Sex Parts’ were not just passing by.”

In addition to “Sex Parts,” Schnitzer reads LGBT themes woven into the “Camouflage” and “Shadows” series.

“The others are far more subtle, and yet just as powerful and in some ways even more,” Schnitzer said. “Camouflage is used for military purposes to hide a soldier from the enemy. But is [Warhol] also suggesting that we all camouflage ourselves; we all have a public persona and image? And is that image different than what lies beneath? Is he suggesting with the ‘Camouflage’ series that much of his life has been covered up, hiding behind his public persona?”

“Shadows,” meanwhile, are almost colorblock prints in style, juxtaposing loosely geometric shapes made of black “diamond dust” with neon and primary colors filing up the rest of the page.

“It’s like being drawn into time and memory, looking up into the sky and pondering life,” Schnitzer said. “Does that relate again to his personal journey? Was his private life always sort of in the shadows of his public life, getting back to his being gay?”

‘Art of our time’

“[It’s] an exhibition that harnessed the power of media to appropriate images, study consumer goods, sex, death, disaster, for a body of work that’s revolutionary. The exhibition highlights Warhol’s obsession with repetition, seriality … and Warhol famously blurred these boundaries between original and copy throughout his career,” said Michael Rooks, who curated the exhibit for the High.

Though many of the prints were created decades ago — the entire first room in the exhibit hall features works Warhol created with his mother — Schnitzer said many of the issues are still relevant.

“He was able to translate the themes that were hitting this country,” he said. “ It’s art of our time. It speaks to us of issues that are just as prevalent. … They’re trying to speak to us and have us help shape our values. Who are we? What are our beliefs? What’s important to us?”

And to really understand that, Schnitzer said, we must go discover for ourselves.

“Andy Warhol: Prints from the Collections of Jordan D. Schnitzer and His Family Foundation”
Through Sept. 3
High Museum of Art, 1280 Peachtree Street NE, Atlanta
Tickets: $14.50 general admission, free for members, available at www.high.org or at the door

Also on the walls of Atlanta art museums this summer:

Michael C. Carlos Museum
“Coiling Culture: Basketry Art of Native North America” presents one of the earliest art forms of the continent and showcases materials from across the country used to create these practical, yet intricate, pieces. Through Feb. 18, 2018
“Threads of Time: Tradition and Change in Indigenous American Textiles” explores the patterns, materials and techniques used to create nearly 150 examples of Native American fiber art. Aug. 19 through Dec. 17
571 South Kilgo Circle, Atlanta
www.carlos.emory.edu

Zuckerman Museum of Art
“Racecar” brings together artists that consider the nature of a limited and repetitive existence — just like the title of the exhibit, and the associated imagery of cars going around a racetrack. Through July 30
“Medium” will present pieces inspired by pasts haunting the contemporary world, occasionally requiring visitors to undergo a leap of faith to explore their own minds. Aug. 26 – Dec. 3
492 Prillaman Way, Kennesaw
www.zuckerman.kennesaw.edu

SCAD FASH Museum of Fashion + Film
“Project Diaspora” is the first solo photography exhibit by Omar Victor Diop, and presents 18 works narrating the tangled historical relationship between African and the rest of the world. Through Aug. 20
“Shoes: Pleasure and Pain” takes visitors on a journey through the history of footwear, displaying more than 200 pairs of shoes, designer sketches, materials and more. Through Aug. 13
1600 Peachtree St. NW, Atlanta
www.scadfash.org