If not Obama, Kelly Clarkson and Beyonce, then who? 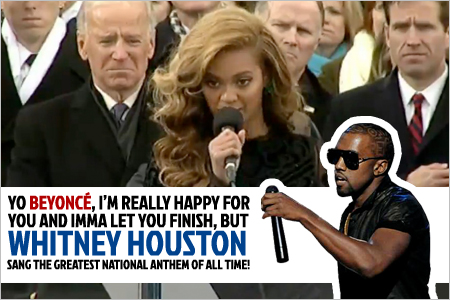 It’s rumored that Lady Gaga will perform at Tuesday’s private inaugural ball for White House staff, so there’s that.

Sounds amazing right? And I actually have no doubt that many of these people, including MJB at last year’s DNC, have previously performed in support of Obama.

But imagine for a moment that Mitt Romney could have won the White House. Impossible, I know, but what kind of decisions would he have had to make about his inauguration?

That’s just who I recognized.

The world will literally (and thankfully), NEVER, EVER KNOW about who would have come out of the woodwork to sing for Romney’s inauguration festivities. I imagine the Mormon Tabernacle Choir would show up somewhere, but I actually don’t know enough about the listed artists-for-Romney to suggest who could fill the other spots.

So yeah, Barack Obama is awesome for gay rights and freedom and stuff, and that’s why I support him. And because he could put on a hell of a show.