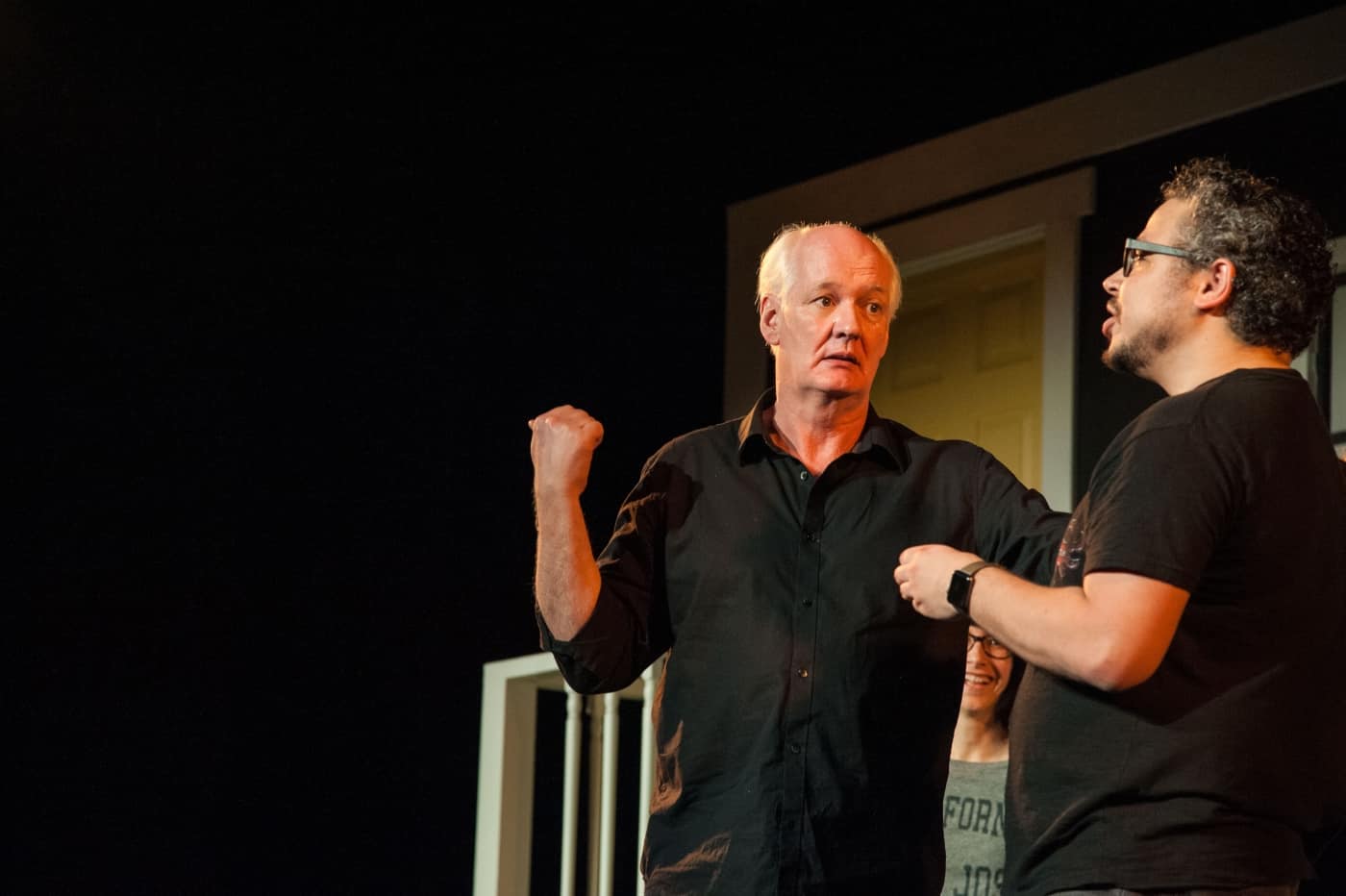 Scottish born Canadian actor Colin Mochrie has been making people laugh for over 40 years. His unique brand of improv made him a sensation on the ground-breaking television show “Whose Line is it Anyway?” But when Mochrie sent out a tweet about his transgender daughter, Kinley, he gained a new kind of fan base. The message was about trans acceptance and it had an overwhelmingly positive response. We spoke with Colin as he prepared to come to Atlanta for a stint this weekend at Dad’s Garage Theatre Company.

Back in January, you sent out this tweet: “My 90-yr-old mother-in-law and 87-yr-old mother love and acceptance of our trans daughter warms me. Wonder why some who are younger can’t.” What was happening?

It was around the time of the inauguration and there was so much negative stuff happening. My wife and I had told our mothers about Kinley’s situation. It was totally unexpected for both of us because as old as they were, they were incredibly accepting. I thought, “Well this is a nice message – people in their ’80s and ’90s accepting a situation that they have no reference for.” I asked Kinley if it was okay if I sent the message and she said, “Yes, absolutely.” For some reason, I just didn’t think that it would have the reach that it did. It was overwhelmingly positive.

It seems like whenever there is a marginalized people group, it always helps when someone outside of that group speaks on their behalf.

For some reason, when people see someone on television, it gives them more weight because people feel like they know you. Especially on “Whose Line” where we are being ourselves. Strangely, when I talked to Kinley, she said the only negative comments she had were from two gay men. I thought that was odd – I figured people in that community would be banding together and helping each other. She’s been fortunate in her situation. Her family is very supportive. Her work has gone above and beyond. She has a great support group. But she felt a little disheartened by the negative coming from her own community.

How did Kinley come out to you and your wife?

Kinley was a lovely kid – always very affectionate towards both sexes. She was in a long term relationship with a woman for five years. After they broke up, she came out as bisexual. After that, she talked about exploring her feminine side. My wife, Deb, then asked her, “Are you thinking of transitioning?” She said, “No. I want to explore it.” But as she explored, that’s where she arrived.

Were you and your wife raised in progressive families?

Oh, no! My parents were old school Scottish. They never talked about feelings. I don’t think they ever said the words, “I love you” but I never felt unloved. When Deb and I got married, my main focus was going to be to take the things I didn’t like about my own upbringing and do the opposite. I decided I would make a conscious effort every day to tell my child “I love you” and to listen to their point of view – to be respectful and very open. Yes, we’ve made mistakes as all parents do but the three of us have learned through the entire experience of being a family.

I have that with my kids, too. But I’ve found that people are judgmental about that if it wasn’t in their upbringing.

Yes! Like you, we’ve had friends who grew up in the ’60s that you think would be more sex-positive who are very uncomfortable with talking to their kids about sex. North America has this thing about sex. The problem they have with transgender is that they’ve made it a sexual thing rather than a gender thing. It comes from a place of ignorance.

I heard you and your wife helped Kinley come up with her name – tell me about that.

There were a few hiccups in her transition – as there should be. She was so excited about her journ … I don’t think we’ve used the word “journey” so much as we have in the last couple of years [laughs]. She just exploded and wanted to do so much. She was nervous about telling us, so her friends had known about it before we did. She sort of said, “I’m transitioning and my name is now Hannah.” And we were like, “What?”

Oddly enough, the thing that got to her mom and I wasn’t that her name was Hannah, it was that she had taken the name from my wife’s best friend’s dog. [laughs] I thought, “Well, it’s just something that we’ll have to get used to.” But my wife, God bless her, she talked to Kinley about it. Kinley came back and said, “I wasn’t thinking. I was so happy about what was going on that I left you out. I want you to give me a list of names and then together we’ll choose. So Deb and I came up with a list of names. I was born in Scotland and Deb’s family is Scottish and Irish. Kinley was one of the names that we came up with. When Kinley saw the name, she loved it and that’s what we chose. No more Hannah, the best friend’s dog name.

I’ve heard trans parents talk about a sadness of losing the child they knew. I think Cher talked about it with her son when he transitioned – that his voice would change and she would never hear her daughter’s voice again. Did you feel any sort of grief when Kinley transitioned?

Oh, absolutely! When it happened, I was out of town. My wife and I were writing a show that was based on our family. Kinley does some acting and we were going to have her be a part of this. Part of that was going to be around her bisexuality. So Deb was writing the script. She called Kinley to say, “We’re going to talk about bisexuality. Are you fine with that?” Kinley said, “Ummm…. Let me get back to you on that.” That was our first warning sign. The great thing about her is that she never jumped into anything. She would always explore first and make sure it was the right choice for her. So we thought, “Okay. Maybe she doesn’t want to come out to the world so we’ll respect her privacy.”

She called back and said, “I want to talk to you about something but I want to wait until Dad’s back in town.” My wife said, “No. If there’s something happening, I want to know immediately.” So Kinley explained what was going on. I was in Los Angeles shooting “Whose Line” and going through a very weird time. We just gotten back from India. I felt not quite right. I went to the doctor and he said I was dehydrated. Then he said, “Did anyone ever mention this heart thing to you?” He gave me an ultrasound and found leaky valves. I went home and got the call that night “Oh, our son is now our daughter.”

I didn’t see her for another two weeks after that. We talked on the phone. But during those two weeks, I was thinking, “So my son, Luke, is he now gone? Is that child no longer?” But when I saw her, I saw my child. She was just wearing a different coat.

That’s lovely. As a parent, I know that any time our kids decide to deviate from the path that we have planned for them since birth, it can be a little heartbreaking or disappointing. But then, they find their own paths to happiness. As parents, we kind of set ourselves up for disappointment by having expectations. It’s not just about sexuality or gender. It’s about anything they decide to do differently.

Exactly. When Kinley was younger, we thought, “This kid will be an actor.” As a boy, he did a lot of work as acting and he was very good. When he got older, he got away from it and it was kind of sad. But all we really want as parents is for our children to be happy and safe.

Both my wife and I are improvisers. One of the major rules of improve is a rule called “Yes, and…” where you accept someone’s idea and you build on it. We had a conversation before Kinley’s transition where we agreed that we should use that rule in our life – to say ‘yes’ to things that make us uncomfortable or we’re not sure about and see where it takes us.

Since we’ve done that, we’ve had amazing experiences. We went to the Congo for two weeks with World Vision to help them get children sponsored. Congo was not a place that would have ever made it on my list of destinations but I wouldn’t have missed that experience for the world. The people were amazing in the worst conditions ever. Who knew that improv would help us to have such a life-changing experience?

I met Kevin, a good Canadian boy, who was doing an improv tournament in Vancouver which is where I learned about improv and started my career. He approached me and said, “I run this improv theater in Atlanta. I would love for you to come play with us.” As many times as I can, I try to improv with people that I don’t know well. Because as much as I love the guys on “Whose Line”, working with new people brings you back to the basics of improv. I have to listen because I don’t know who they are or where they might go. It’s like a refresher course for me.

This will be my fifth or sixth time at Dad’s Garage. I love it! It’s a great company of very talented improvisers. It’s the highlight of my year to play in Atlanta. I can’t wait to see everyone!