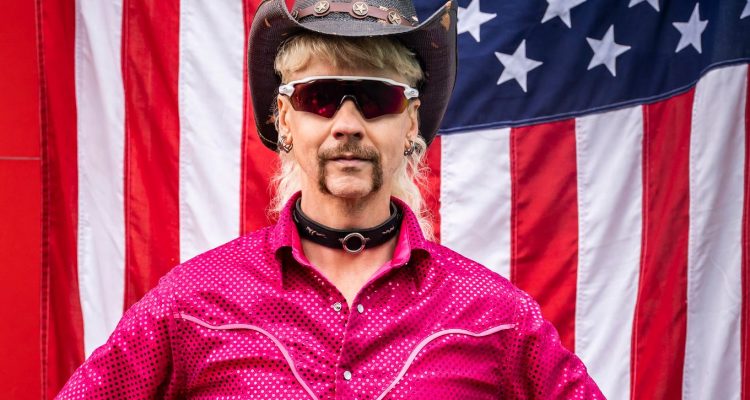 His role in “Hedwig and the Angry Inch” made him iconic, but now John Cameron Mitchell is biting into another memorable character. In the new series, “Joe vs. Carole,” he plays Joe Exotic, the notorious gay zoo operator who butts heads with Carole Baskin (played by Kate McKinnon). These two characters became household names when Netflix’s “Tiger King” aired two years ago.

“It’s a role you can sink your canines — and felines — into,” the actor said. “I haven’t had such a delicious role since ‘Hedwig,’ and I enjoyed shooting this more because I did not have to direct it.”

Mitchell feels that the script was deeper and more empathetic than the documentary miniseries, showing where these characters come from and the fact that both Exotic and Baskin were survivors of trauma and reacted in different ways to it.

“They are both a little megalomaniacal,” he said. “The queer people in certain redneck environments have three choices — they lay low and become the hairdresser, go in the closet and get on with their lives, or they get the hell out. Joe did the third way which is create community within the rural area. He had his little kingdom which he saw as a sanctuary for animals and misfit folks. Unfortunately, he took advantage of two [of them], but he did have a big heart. It just starts to get out of hand when your bitterness spills out and you’ve gotten hurt in the past and you think everyone else is trying to hurt you, which leads to the attempted murders.”

Mitchell feels it’s impossible to condone what Exotic did, but said it was interesting to see how he got to that stage. He’s happy that the new series shows how the character’s husband of 17 years died of AIDS and focuses on homophobia and suicide attempts. He also made another discovery while preparing for the role.

“As I did research, I realized I had a lot more in common with him than I thought,” Mitchell said. “I’m a queer gay from the same part of the country; we are the same age; we are both showmen; we create communities of misfit people to put on a show.”

Working with McKinnon, whom he had only met once before, was a particular joy. “She is very sweet and very shy, very low key, and would rather go garden than go to a party, and we had a lovely time,” he said. “We didn’t have much to do in the series — we have three brief encounters — but this made me want to do more with her. I am actually writing a part for her.”

Sebastian Meise’s “Great Freedom” is one of the most acclaimed LGBTQ films of 2021, making the Best International Film Oscar shortlist. It follows a gay man and his incarceration in prison over several decades. Director Meise read a book about the queer history of Hamburg, dealing with gay men who were liberated from concentration camps and put directly into prison.

“That was the starting point of the journey, because I realized I did not know this,” he told Georgia Voice. “This was shocking and disturbing, and I did more research about Paragraph 175. I knew homosexuality was illegal, but it seemed so far away from me. I didn’t know of the dimensions and the absurdities and the ridiculousness.”

He feels a lot of younger audience members know nothing at all about Paragraph 175, a German statute that criminalized sex between men. Even the director’s father, who grew up in the ’50s and ’60s, knew nothing about it.

Meise wanted to film on location at an empty prison, and in East Germany he found 10 of them. In all, the project took six years from the time he got the idea, including a delay because of COVID-19.

At the heart of the film is the character of Hans, played in a stunning performance by Franz Rogowski.

“The interesting thing about Hans is that he cannot change who he is,” Meise said. “His whole life is like a prison, having to be forbidden for who you are.”

“That was not there from the beginning,” Meise said. “This relationship was not intended. We realized every time Hans came back [to prison] there was Viktor. This is what the story is really about.”

“Joe vs. Carole” is now streaming on Peacock.

“Great Freedom” is now in theaters and will soon be on Mubi.