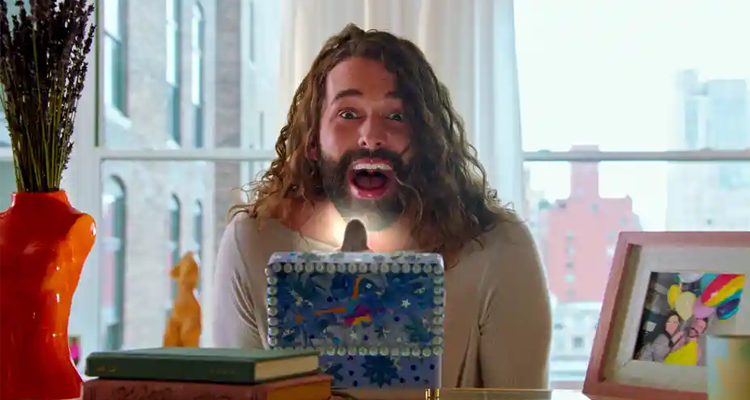 Editor’s note: Van Ness is nonbinary and uses all pronouns. We use they/them pronouns throughout this article to refer to Van Ness.

When the new “Queer Eye” premiered four years ago, some had doubts that lightning could strike twice. As it turned out, it could — and the new series made stars of the new Fab Five.

One of the breakout hosts was Jonathan Van Ness, who — in addition to being in the new season of the hit show — is back with another series. A spinoff of their podcast of the same name, “Getting Curious with Jonathan Van Ness,” debuted last week on Netflix. It’s made up of six episodes covering different themes.

Van Ness knew that they had something special with their podcast.

“Learning how to produce and create a podcast is so fulfilling, and I am growing and learning in the podcast world still after six years, but I realized in 2019 there is a series here, a long-running TV series here,” they told Georgia Voice. “I didn’t really know what the format was, but I knew I wanted to ask questions, take them out into the world and interview multiple subjects and bring it to life. I wanted to give it visualization and texture and music and fashion and fun and throw everyone I am into a series. I am so proud of what we were able to come up with.”

The most intriguing episode is “Can We Say Bye-Bye to the Binary?,” in which Van Ness talks to others who identify as nonbinary, like they do, about how society has tried to define people against their will. It’s also a bit of a history lesson.

“To be able to walk around where the Stonewall Riot happened, where the first Pride happened, and to experience that with a mentor and a dear friend was incredibly special,” they said. “I felt the spirit and energy of all the people who have come before us and whose shoulders we stand on. I felt like my inner child. I remember being bullied as a child. I remember thinking growing up that if I could ever grow up and prevent that from happening to another kid, the pain would be worth it. I have carried that feeling throughout my entire life. In this episode, I thought ‘I hope this helps some people to find some peace and joy and acceptance andsome curiosity.’”

Other segments include examinations of hair, bugs, and ice skating and include some special guests.

When he was nine, he attended a camp where he was introduced to the arts. A teacher there watched him dance, saw some potential, and suggested to his mother that he take dance seriously. From there he got a scholarship to a dance studio and went to some other schools before eventually moving to New York to go to Ailey.

Wilson saw Ailey for the first time when he was in sixth grade.

“Most of what I had seen at the time was classic ballet, Eurocentric, very white,” he said. “I had never seen any dancers of color on that big of a stage before and I watched in amazement. I said, ‘They look like me.’”

This tour is the first one in two years for the company, so it’s a little different.

“We are making it work,” Wilson said. “The pandemic plays a large part in it, but touring is one of my favorite parts. I look forward to seeing the world while doing my job.”

The show includes more than 10 numbers and featured dancers rotate through them.

“We are in every ballet or rep, but we might not dance it every night,” Wilson said.

Included is the world premiere of “For Four,” new productions of “Reflections in D” and “Unfold,” and many repertory favorites.

As a gay man, Wilson feels very secure with the troupe and is aware of the strong LGBTQ appeal the dance company has.

“Ailey is a very safe space, very LGBTQ friendly,” he said. “I feel comfortable. A large part of the company is LGBTQ.”

“Getting Curious with Jonathan Van Ness” is now streaming on Netflix.