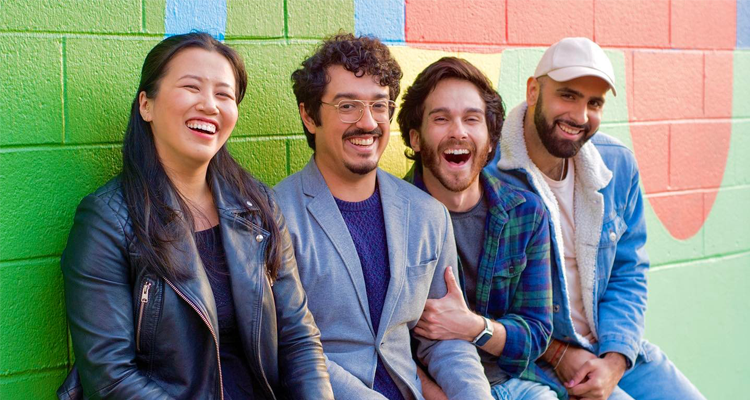 The cast of “Homos, or Everyone in America” / Photo by OutFront Theatre Company / Tyler Ogburn Photography

Jordan Seavey’s ‘Homos, or Everyone in America’ to Debut at Out Front Theatre

Jordan Seavey’s irreverent drama-comedy, “Homos, or Everyone in America” will make its Southeast debut at Out Front Theatre. Chronicling the interracial relationship between two men from 2006 to 2011, Seavey’s play peers into the quotidian details of love to uncover not only the particularities of gay partnerships and the times in which they take place, but also the universal need for connection regardless of sexual identity, race, or creed.

The play’s two central characters are personalities that fans of romantic comedies should be familiar with. The Writer (to be played by Tyler Sarkis) is the classic neurotic urbanite, and the Academic (to be played by Niko Carleo) is the impassioned scholar. Even the play’s setting of New York City carries a history of romantic comedies about two people — similarly in creative professions — falling in love. But “Homos” uses the familiarity that comes with its characters and setting to create an original story. Not only does it take the typically heterosexual genre of the romantic comedy and make it gay, but it also looks at the intimate and complex details of a relationship in the context of a larger culture. Wit-filled arguments over the use of poppers or the value of monogamy between the two lovers expose contradictions in the ways they think; their opinions morph and change over time as does mainstream America’s views of the LGBTQIA+ community, showing how being a member of both a partnership and a society has changed them as individuals. In this way, “Homos” puts a spotlight on subjects specific to gay life at the beginning of the twenty-first century, while also showing how these particularities are relatable to almost any relationship at any time.

“I have been exposed my entire life to overtly heterosexual narratives,” Seavey said of this duality in an interview with Georgia Voice. “They are really, really baked into storytelling mediums like TV and theater. So, at my most rebellious, I’m like ‘straight people need a dose of my reality.’ But at my most caring and loving, I think I’m portraying a really real, really human relationship between two men that has so many parallels to any romantic relationship.”

But just because “Homos” is inclusive and reminiscent of the romantic comedy genre does not mean it lacks moments of gravity. The play is punctuated (literally) with the sorrowful dangers of being gay in America. The aftermath of an act of homophobic violence is what begins and ends “Homos” as well as the relationship it follows. The trauma of the event even disrupts the structure of the story, turning it into a fragmented narrative that compels the audience to piece together moments of a relationship where things went wrong and then where things went really wrong.

This blending of comic levity and weighted tragedy is an unfortunate reality for gay men that Seavey feels necessary to capture.

“Sometimes I think about how we’re having conversations that ask why can’t we just have TV shows or plays or books that focus just on gay or queer joy,” he said. “But I have to say, until people stop getting beaten up, I think it’s totally worthwhile to write plays that include dissections and meditations on violence against the community.”

Seavey makes it a point that most of the play is not dedicated to this moment of violence, however. Indeed, the play is really about the ins and outs of gay relationships in a particular time in history, which is what makes it so special. The Writer and Academic meet when people used Friendster and Razor phones, continue dating through the time MySpace would fall to Facebook, and eventually split when iPhones still had home buttons. For older audiences, this will make the play feel like part of the modern world, while younger audiences may perceive “Homos” as a period piece.

This has made the founder of Out Front, Paul Conroy, excited to produce the play.

“We have a lot of older patrons that come, and they’re going to look at this through different lenses — no pun intended — than someone who is a lot younger,” Conroy told Georgia Voice. “The whole part about monogamy versus monotony won’t even be on their radar because they grew up in a different time. It’s wonderful that this play has diversity baked into it this way.”

Seavey describes the play’s sense of time — in reference to both its nonlinearity and its placement in the 2000s — as “impressionistic.” Indeed, “Homos” invites all of its audience to form their own impressions and interpretations of it. In this way, Seavey places an emphasis on both “Homos” and “Everyone” in the title “Homos, or Everyone in America,” as he calls on everyone to recognize some part of themselves in a play about a loving, complicated relationship between two men. And everyone should listen.

Homos, or Everyone in America makes its Southeast debut at Out Front Theatre on May 5 and runs through May 21. Buy tickets at outfronttheatre.com.