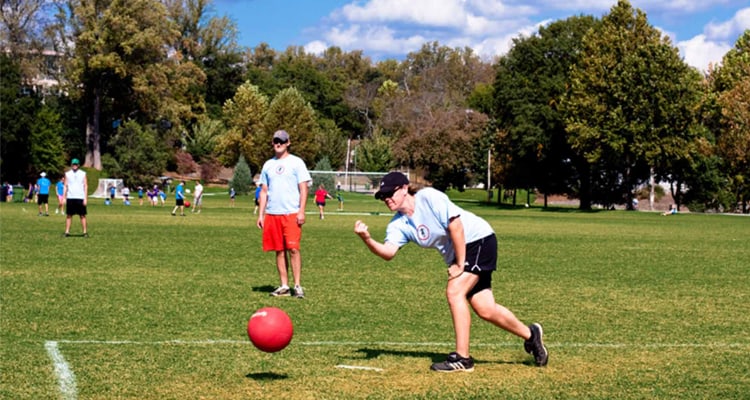 Kicking it with Good Company

One of the many sports that is admired but yet highly underrated here in America is kickball. It’s the playground recreation that isn’t taken too seriously but makes a point to have a straightforward set of rules. There isn’t a fierce competition that you see in other sports. It almost makes it feel like an activity that teeters the line of being a sport because of how human beings handle competition, but the fact is that it is a team sport. And the collaboration involved in kickball was one of the motives that the national kickball league, GO Kickball, had as it made its mark in Atlanta in the spring of 2006. The domestic league is active in twenty-eight cities this year across twelve states. GO Kickball’s success led to further growth in the association, a group called GO Sports Unlimited. The collective includes other competitive and non-completive sports.

Lindsey Kassen, Senior Director of Atlanta’s GO Kickball, states, “It wasn’t specifically focused on sports. We were focusing on the social networking aspect of it. We were using kickball as a tool to meet people and get out in your community.” The association has met their goal plus more – expanding even further by adding dodgeball, cornhole, bocce ball, flag football, soccer, softball, volleyball, and ultimate frisbee. When arriving in Atlanta in 2006, GO Kickball quickly had a massive growth inside and outside of the perimeter – spanning from Cobb, Fulton, DeKalb, and Gwinnett County. While the kickball league was seeing positive results, they remained highly receptive towards any feedback, keeping their ears close to the members of the association.

With a high number of LGBTQ players involved in the kickball league, they began to hear from the LGBTQ community. There was a wide-scale desire to have a branch of the association that was exclusively LGBTQ. By no means was the LGBTQ community striving towards having a league of their own due to any discriminatory factors from the first league. The cause was simply about the comfort of being amongst their community, something to call their own. As ardent allies of the LGBTQ community, the GO Kickball League took the initiative to make this request come to fruition. Those involved were Lindsey Kassen and Katie O’Brien, along with the help of other individuals and partnerships with Blake’s On The Park, Tito’s Vodka, and Joining Hearts. The Pride League is now in its fifth season since beginning in 2014. And as the city grows, so does the league. “A lot of the time people will reach out informing us that they just moved here, and want to sign up,” says O’Brien, GO Kickball’s Atlanta Marketing Coordinator

The principles of GO Kickball are to encourage an active lifestyle, sustain a social life, and to further your purpose, whether it’s to lift yourself up or to lift up others. O’Brien expands, stating, “The sports that we are trying to foster are about being out in your community, enjoying it, meeting new people, and feeling comfortable. You don’t have to be an athlete to do it, but you can still stay active and enjoy a sport with other people.”

If you are intimidated or assuming that you cannot go into alone, well, they have you covered. “People can sign up as a free agent, even as a small group of two or three. And then we can place you to a team. Or a captain will invite them or sign them to a team,” says Kassen. “In comparison to our other league, we usually have about twelve free agents. The Pride League usually has up to twenty-seven free agents.”

This system makes it all the more inviting. The likelihood of everyone knowing each other on a single team is highly unlikely. There is almost a guarantee that there is someone who is in the same position you are. “We will see two separate groups one season, then see them split off into another group,” says O’Brien. “It’s something that we don’t see with other leagues which is awesome because they’re truly building the connections.”

Pride Kickball Atlanta is held at Piedmont Park. There are a total of three seasons; spring, summer, and fall. The winter season is taken off. For a few of the sports that they offer, they push through year-around. It’s an eight-week-long season with seven regular-season games and a final week playoff which varies depending on the number of teams in the league that season.

“What we have always done from the get-go is a big Atlanta city tournament. We invite everyone from our leagues all over Atlanta whether you’re the league winner or division winners to a one-day tournament. Generally, thirty-two teams play in it,” says Lindsey Kassen.

The Pride League is a social event where lifelong friends are made. It’s a recurring theme that after the kickball games, everyone meets up at Blake’s on the Park for food and beverages – connecting on multiple levels. This can lead to another time later down the road and an immediate friend. Kassen and O’Brien’s vision of the league ring true, that kickball can be “a tool” to further pursuit human connections. “We wanted to foster the love that all of them are coming with,” says Kassen.