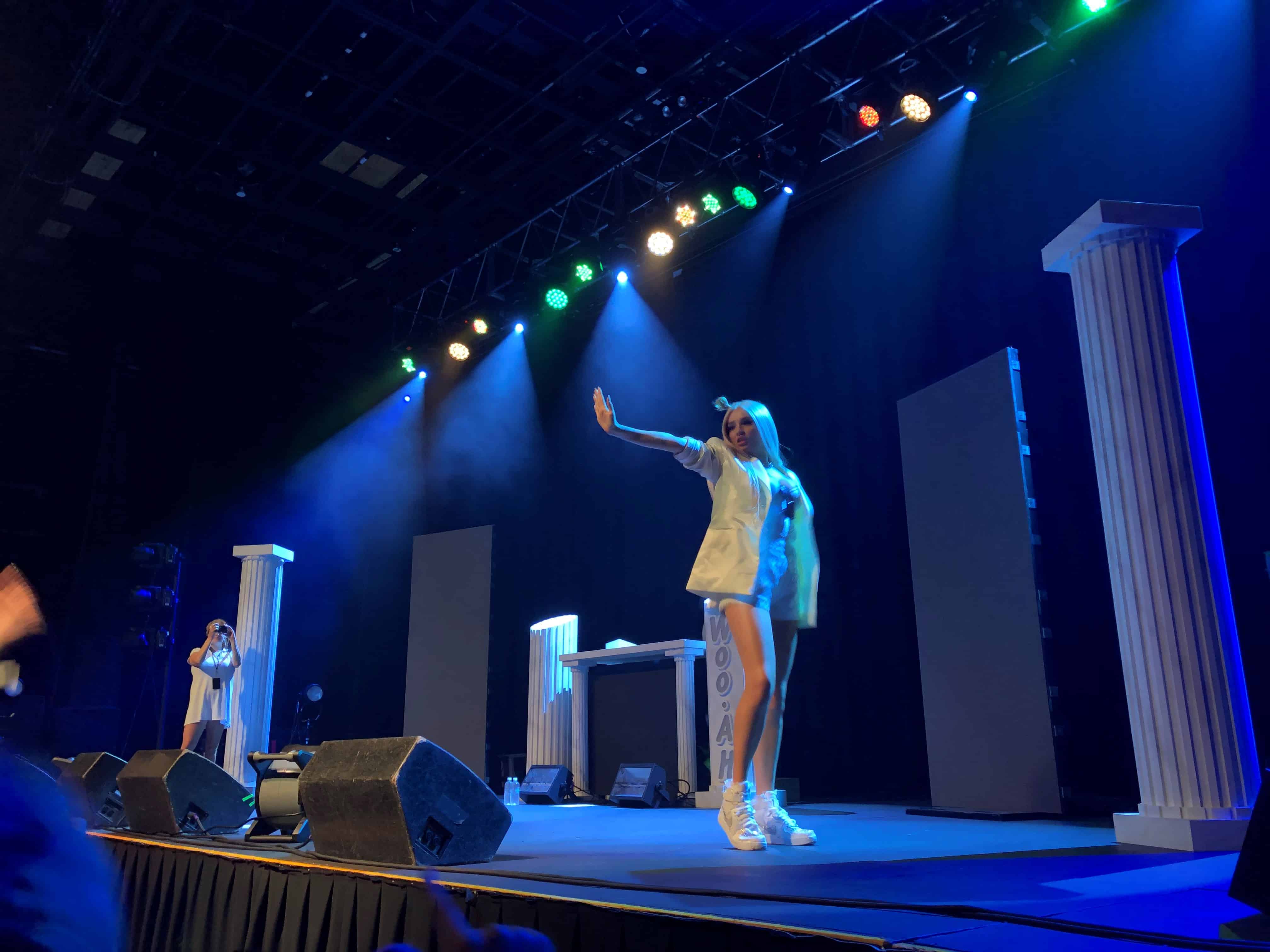 As the days get hotter and longer and the summer parties and festivals pick up, we’re all looking for new artists to grace our perfectly curated playlists of the season. For danceable, sensual club bangers, look no further than German pop star Kim Petras.

Though Kim Petras’ music seems to emanate a distinctly West Coast energy, she in fact hails from Cologne, Germany. Petras is a trans woman, and made headlines when she transitioned at age 16, allegedly making her the youngest person to ever receive gender-affirming surgery. Ten years later, she’s been releasing music constantly — “Personal Hell,” released June 13th, is the eleventh single Petras has released this year — and is well on her way to breaking into the pop mainstream.

Kim Petras performed to a sold-out crowd at Atlanta’s Center Stage Theatre on June 12th. It was the second night of her first headlining U.S. tour, named the “Broken Tour” after her recent single. DJ Mazturbate opened for Petras, hyping up the crowd with plenty of memetic songs like “Baby Shark” and the “and I oop-” remix

Petras performed her recent singles as well as older hits. She treated the crowd to an early Halloween with several hits from “Turn off the Light, Vol. 1.,” asking, “Who’s here for the spooky bops?”

While introducing her song “Broken,” she said that her inspiration came from her belief that feeling lost and broken makes you reevaluate things in your life and in yourself. “In a way, it’s a gift,” she said.

The performance featured no fewer than three costume changes, including a white romper and blazer, a black sequined outfit for her Halloween songs, and a look that featured an oversized t-shirt of her own merch paired with lacy bike shorts.

Kim Petras first gained attention with her 2017 single “I Don’t Want It At All,” a catchy where Petras demands life’s luxuries like a grown-up Sharpay Evans. Petras also became well-known for performing with Charli XCX, and being featured on Charli XCX’s 2017 song “Unlock It.” Petras has also collaborated with artists such as Cheat Codes, SOPHIE, and Lil Aaron.

Petras then strayed to the spookier side with a Halloween-themed EP titled “Turn off the Light, Vol. 1,” in 2018, which features songs like “Close Your Eyes,” “TRANSylvania,” and “Boo! Bitch!”

Her most recent singles, released in 2019, discuss heartbreak and loss — songs like “All I Do is Cry” and “Broken.” The more upbeat songs of her recent releases move towards partying and sex with “Blow It All,” “Sweet Spot,” and “Do Me.”

Petras’ music doesn’t seem to focus much on her transgender identity so far, but her fans feel supported by her nonetheless. And she does occasionally tweet incredibly iconic declarations, like “Duh I’m trans,” as well as messages of support for pride month and tweets about her struggles growing up as a trans girl.

Petras’ musical influences include Britney Spears, Kylie Minogue, and other pop stars of the early 2000s, as well as 1980s Italo disco. Kim Petras’ fans call themselves “Bunheads,” after Petras’ iconic hairstyle, a lopsided bun, which is also featured on the album art of her early singles.

When asked why they love Kim Petras, a fan named Matty, 22, said that she is “a trans icon” and “makes unapologetic pop music.” Solomon, also 22, first discovered Petras due to Charli XCX. “[Petras’] Twitter personality is everything I’d want,” said Solomon. “She understands us.”

“I LOVE Kim Petras,” said a fan named Kyle enthusiastically after the show. “And I’m so happy because I’ve never felt so comfortable in a concert venue before.” The crowd was largely comprised of LGBTQ+ fans. Kyle hopes that Petras will break into the mainstream, at least to the extent of Charli XCX.

For the Bunheads, Kim Petras’ energy can be summed up in the artist’s signature, often-repeated exclamation: Woo-ah!