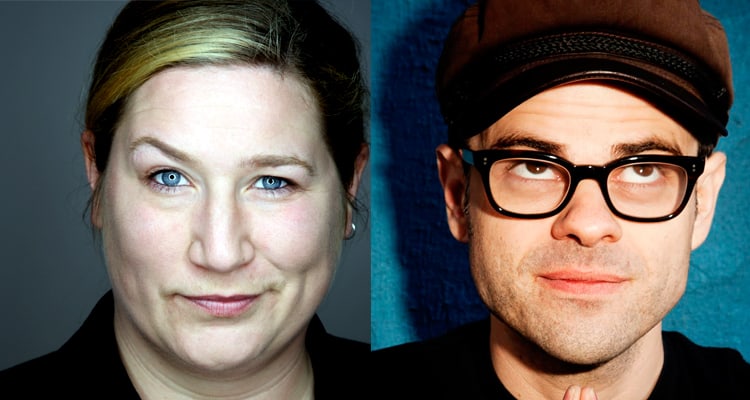 What do you get when you cross a lesbian comedian with a skate-punk preacher who also happens to be the son of Jim & Tammy Faye Bakker? You get a tag-team duo hitting the South for their second “Loosen the Bible Belt” tour. Georgia Voice sat down with Becker and Bakker (a former Atlanta resident) for a funny, informative and poignant interview.

How did the idea for this tour come about?

Kristen: I have Christian friends and I’ve always been gay – it’s always been a thing. I kept seeing all of the Christians getting together here and the gays would get together there. It just seemed to me that we should all get together to have something pro-Christian and pro-gay.

I watched Jay’s documentary “One Punk Under God” and he showed a lot of fortitude. When asked about his stance on gay marriage, he said love is bigger than anything. I was blown away. I said, “Do you want to go spread some love around with me? Get in the car,” and he said, “Okay.” (Laughs)

Jay: When I did that show about 10 years ago, I had fallen under conviction that my gay brothers and sisters were being left out. I was talking about how the church was mistreating them but it had to stop with “we should treat gay people better.”

As I began to study the issue in depth, I concluded that what we know gay, lesbian, bisexual and transgender to be is not in the Bible. Most of it was about worshiping other gods or whatever. I was struggling to speak truth but also worried about what all other pastors worry about – that if you speak the truth, you’ll lose everything. But soon enough, I just didn’t care anymore what it was going to cost me. I had to speak out.

The sermon didn’t even go up online yet before cancellations of my speaking engagements came in. My biggest donors pulled their support, board members resigned. I knew it would happen. I saw what happened to my parents.

The Sundance Channel wanted to record me for a documentary (that morphed into a reality show) and my mom, at the time, was dying of cancer. It was strange how many letters I would get from people more concerned about my stance on the gay issue than they were about my mother dying. Their concern wasn’t for people; it was about their idea that I had broken some sacred theology. I did the show and when it was released, it really touched a lot of people, so I was truly thankful.

Kristen: I was one of the people he touched. I contacted him right away and pitched my idea of us going on the road together. This is our second year – we did 10 cities last year. We were four people in a mini van doing an experiment to see if we could get people that wanted to hear dirty lesbian jokes and preaching in the same room and they did! We got all kinds coming up to us after the show and we’re filming it all.

Jay got a lot of pastors with what he calls “dead eyes” – these young guys who want to love everyone but the people who are higher up are telling them no, they can’t love everyone. We interviewed a young couple but they didn’t want to be on camera because their family didn’t know they were agnostic. They were raised Baptist but were questioning those beliefs. So their closet was religion-based.

Jay: I just want us to start asking ourselves why we continue to try to look for a scapegoat. Why do we continuously try to isolate people? Why are we trying to force people into certain bathrooms? Why do we try to deny equality? We try to be lighthearted, entertaining and serious all at once. People get the whole package.

What do you want to say to your Atlanta people?

Jay: Atlanta is my home. A lot of my tattoos come from Atlanta. I used to work at Criminal Records. I bought my skateboards at Stratosphere. Little 5 Points was my stomping grounds. I hope that my friends will come see me and say hello.