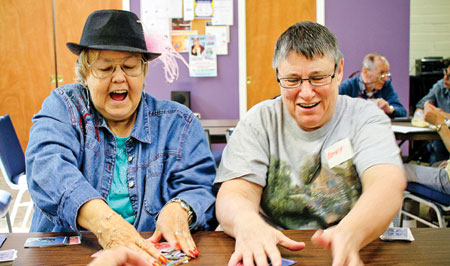 It’s a recent Thursday morning and five women and one man are sitting around a table at the Phillip Rush Center in Candler Park, playing a derivation of Canasta called Hand and Foot. The game is quick-paced as the players lay one card down after another.

The players are members of the newly formed Atlanta chapter of SAGE USA, Services and Advocacy for Gay, Lesbian, Bisexual & Transgender Elders. SAGE Atlanta meets every Thursday starting at 10 a.m. for cards and social hour with programming beginning at 11 a.m.

Ages of those seated around the table range from 60 to 74. All are active, able to drive and live fairly comfortably. But all also seek companionship with older people who are like themselves.

“My goal for a long time was to start an ‘Old Dykes’ Home’ where we could all live in cabins in the mountains,” said Reba Hood, 60, who moved to Atlanta in 1987, as she reached for a card. “I was thrilled when SAGE started here.”

Rather than creating a new space, Hood said she’s been creating a “NORC” — Naturally Occurring Retirement Community — in her Belvedere Park neighborhood near Decatur for the past several years, encouraging lesbian friends and acquaintances to move into the neighborhood.

“I’ve already got several people to move there,” she said.

But the convenience of aging together in a neighborhood is complemented with an organization such as SAGE Atlanta, she said.

SAGE has more than 20 affiliates across the U.S. with Atlanta receiving affiliate status earlier this year.

Heading up the local affiliate is Doug Carl, 49, who retired last year from his job as deputy director of the Fulton County Human Services Department. Several years ago, while working with Fulton County, Carl became involved with the Atlanta Regional Commission and its efforts to find ways to meet the needs of aging residents, including those within the LGBT communities.

“There are some very serious challenges facing our senior citizens,” Carl said.

Housing is a key issue, he said, because many older LGBT people feel a need to retreat back into the closet if they have to live in an assisted living center, for example, where the staff may be hostile toward LGBT people.

In talking to a representative from an Atlanta affordable housing location, Carl said he’s been told they know LGBT seniors live there but they are afraid to come out and tell anyone because they fear rejection from their peers.

“I know a good number of LGBTs live in Lutheran Towers [on Juniper Street in Midtown] but … nobody has a tool to designate a housing provider as GLBT friendly,” Carl explained. “I’ve been getting calls from those out of town relocating here looking for assisted living. But right now we’re relying on word of mouth.”

SAGE Atlanta has been around just six months and there’s plenty more to do. But why a city with such a large and diverse LGBT population doesn’t have more readily available services for older LGBT people is a good question, Carl said.

“I don’t know what the answer is. Maybe it’s just the culture. Other cities have had a SAGE chapter for years. Was it a capacity issue, not knowing where to begin? What agency would take it on? You would think from the size of our community there would be an infrastructure in place. I’m just happy now someone is here to pull some things together and start furthering the position for GLBT seniors,” Carl said.

“We are behind the 8 ball serving our current generation of elders and we have to plan for when we become that age. Now is the time,” he added.

In a recent interview, Mary Anne Adams, 56, discussed why she decided earlier this year to form ZAMI NOBLA, an Atlanta-based national organization for black lesbians age 40 and older.

The LGBTQ community can often be youth-oriented, Adams said, and how people age and where they age is a crucial component of being empowered as they get older. Gender, class and race also play roles in how people age and are components ZAMI NOBLA wants to address as it continues to grow.

“There is an internalized oppression around aging and we are on a mission to change that paradigm,” Adams says.

The nonprofit recently received an American Psychological Association grant to help it get started and future programming is planned with Charis Circle, the nonprofit arm of the feminist bookstore Charis Books & More. The organization has already collaborated with Friday movie screenings at First Existentialist Congregation. SAGE Atlanta members also attend the screenings.

The APA money will be used to provide free mammograms to black lesbians 40 and older. ZAMI NOBLA plans to partner with the Center for Black Women’s Wellness to host a health fair, sometime in the spring, Adams added.

Currently, ZAMI NOBLA has a steering committee in place and in January the organization will put out a call for board members as well as provide board member training, Adams said.

And while ZAMI NOBLA focuses on older black lesbians, that does not mean the organization is against other groups that are tackling issues of aging in the LGBT communities.

“There are some unique issues we face and we want to deal with those issues,” Adams said. “And we will engage in collaborative partnerships. We will stay in conversation with other aging lesbians because we can all benefit.”

Working with resources already in place

Hilary Meyer, director of the National Resource Center on LGBT Aging — an organization established through SAGE USA in 2010 by a $900,000 grant from the U.S. Department of Health and Human Services — says there are three main issues older LGBT face regardless of where they live:

• Stigma and prejudice over the years lead to health disparities compared to non-LGBT peers.

In Atlanta, Carl and SAGE Atlanta, as well as the Health Initiative and other gay-friendly organizations, provide cultural competency training to mainstream healthcare providers, assisted living centers, senior centers and others who serve older adults so they are aware of how to treat a gay senior citizen.

This is part of a national strategy to ensure there is a place for LGBT seniors to go when they need help, Meyer said, because while building a completely new and LGBT-only senior center is popular as an idea, there are very few such facilities in the country because they require so many resources to get off the ground.

Working with already established groups and people is the most efficient route, she added.

Happy to be older and gay

Charles Stevens, 84, is a World War II and Korean War vet. He pulls out a yellow Post-It note from his worn brown leather wallet to show a handwritten list of all the organizations he’s involved with: American Veterans for Equal Rights, Servicemembers Legal Defense Fund, Atlanta History Center, Atlanta Botanical Gardens (he volunteers on weekends), Atlanta Prime Timers (for older gay men), and he’s on the board of his condo association as well.

“I can’t remember them all,” he said with a smile.

Stevens moved to Atlanta in 1958 while working for the fabric manufacturer Scalamandré, a high-end fabric and textile company based in New York.

With Prime Timers, Stevens created a buddy system so everyone has a buddy to check in on every day, whether through the internet or by phone.

“There was one time when a member was hurt for several days in his home before someone inquired about him and he was checked on,” Stevens said.

He worries for other older LGBT people, especially those without much money.

“I’m concerned housing is too costly for many on a limited income. I live alone in a condo complex where there are 246 units and there are 30 gay people living there, I’m guessing,” he said. “Most of us live alone.”

And that’s why organizations such as SAGE, Prime Timers and ZAMI NOBLA, which plan activities for members, are crucial, said Meyer. But other gay groups not focused on serving senior citizens can also take time to remember there are older people within the community.

For example, gay groups can plan events earlier in the day or evening to allow for older people to attend who may have more difficulty driving at night or do not stay up very late. After all, said Meyer, we are all going to get old and the time to realize it is sooner than later.

Stevens is happy to grow old as an openly gay man.

“I wouldn’t want to be younger again,” he said.