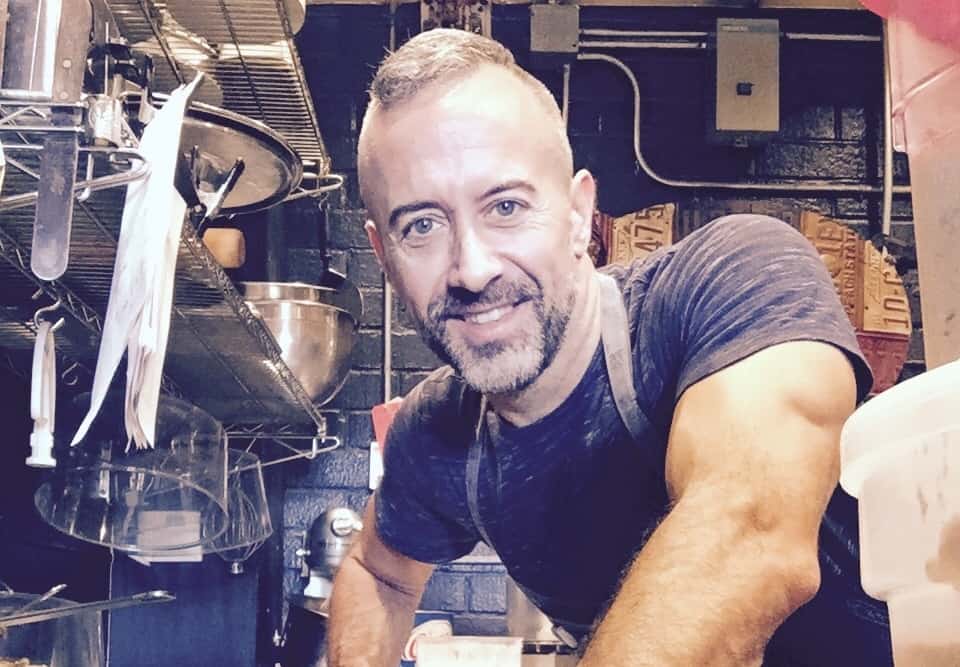 In winter 2010, Frank Bragg was living large. He’d parlayed his years of corporate restaurant experience into a tony position with Metrotainment Cafes, owners of such local gay restaurant hubs as Einstein’s and Cowtippers.

It’s safe to say he was riding a huge wave. Then, out of the blue, the wave crashed: Metrotainment downsized.

“Pretty much the entire executive team lost their job in one day,” Bragg said matter-of-factly, recalling that after the initial shock, he realized he had been presented with an amazing opportunity to pursue a personal dream.

Fast-forward to 2016. Bragg is a runaway success as the owner of Candler Park’s popular eco-conscious Radial Café. In the six years since that fateful day, Bragg has nearly tripled sales for the little restaurant with the big community mission and is preparing to open a second location in College Park in the spring.

For Bragg, when one career wave crashed, he simply found a new one to ride.

“It was really just about the best thing that happened to me,” he said on a recent Sunday afternoon, the sounds of a busy dining room bustling around him.

Nearby, a table full of millennials laughed loudly. Near the bar, a smiling waitress dished up a tall sandwich and savory greens to a singleton working on his laptop. Scattered throughout the urban-chic space sat regulars, each stopping to share a greeting with the accidental restaurateur.

It’s exactly the type of environment Bragg wants and what he thinks play a huge role in Radial’s success.

“We have great people,” he said. “They genuinely like to take care of people.”

The second café is slated to open at 3725 Main Street, in College Park, just a few miles from the East Point home he shares with his husband of 26 years. The 2,700 sq. ft. historic storefront features a 1917 Coca-Cola mural, along with room for up to 130 diners, including a 15-person bar. Formerly home to two white tablecloth restaurants, the space will be revamped to feature the “industrial farmhouse” look that’s become Radial’s signature, including hardwood floors, exposed wooden beams and rustic décor.

“The second owner basically walked in the door and adopted the décor from the first restaurant, so it really has not had a facelift or any kind of refresh since 1998,” Bragg said. “So I’m really looking forward to going in and giving it a new look.”

The new location may be miles away from the original, but it will feature the same things that have made Radial Café unique – from a menu full of tasty delights like Zinfandel-braised short ribs to a deep commitment to sustainability and environmentally friendly practices.

Radial’s theme is “Small Carbon Footprint, Big Local Flavor,” and they live up to it in ways big and small. There are the obvious things: The restaurant features multiple types of garbage bins near the door, and composts up to 70 percent of its waste – things like uneaten food and paper that will eventually find their way back to the café in the form of fresh ingredients.

“All that stuff gets composted and goes back to Georgia farmers,” he said. “So it’s kind of like a nice circle where we send them fertilizer for plants and then they grow them.”

Then there are the little touches, such as low-flow faucets, sensor lights throughout the building and even efforts to minimize deliveries to keep trucks off the road and cut pollution.

The eco-conscious efforts earned the restaurant a three-star award from the Green Restaurant Association in 2011, and Bragg said he thinks they also help explain why the café has found popularity with new audiences, like millennials.

“They want to know that their dollars are going to something that’s going to make a difference, as opposed to just padding the owner’s pockets,” he said.

More seasoned consumers like Dave Hayward like what the restaurant stands for too. Hayward, who works to preserve Georgia’s LGBT history, has been coming by for the grits and good vibes since before Bragg took ownership from another popular LGBT entrepreneur, Philip Palmer.

“I just try to spend my money anywhere I can benefit other LGBT people,” he said. “I think Frank is very community-spirited.”

Indeed, Bragg’s extracurricular activities have included work with the LGBT chamber of commerce, gay homeless youth and even the local gay men’s chorus.

Radial’s expansion was a few years in the making and follows a few failed property deals. It was frustrating, but worth the wait for the food enthusiast who said he’s been preparing for this role since he was a little boy taking orders at his grandparent’s West Virginia drive-in.

Bragg buzzed around the dining room recently, sporting a stylish leather apron and a smile.

Owning a restaurant is super hard work – Bragg is no stranger to 80-hour weeks – but he wouldn’t have it any other way.

“It just feels like it’s been a natural progression,” he said.