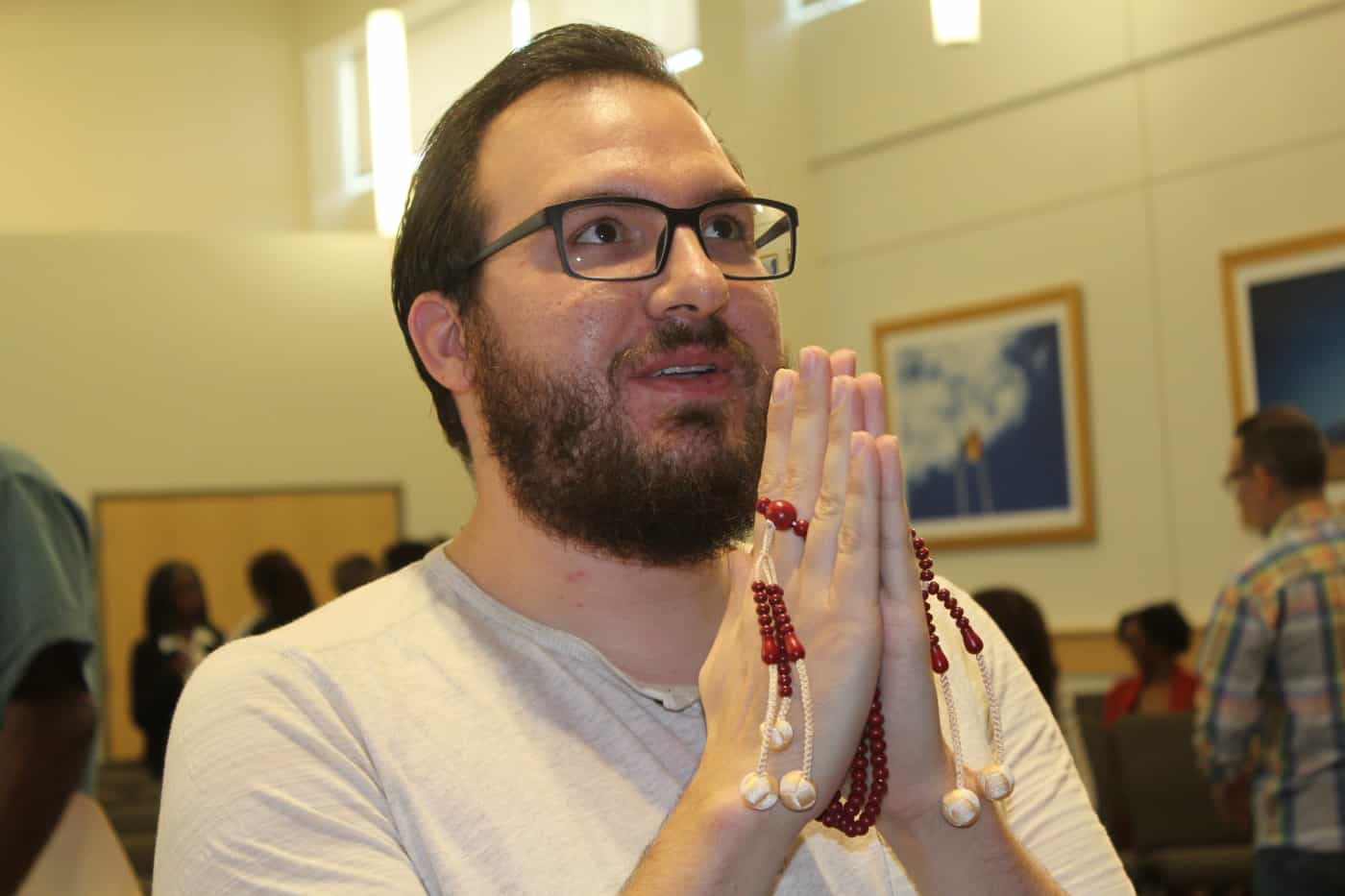 One recent Saturday morning, as shoppers worshiped the ready-to-assemble furniture and Swedish meatballs at the IKEA in Midtown, a different kind of worshiping was going on across 17th Street at the Soka Gakkai International (SGI) Atlanta Buddhist Center. One person after the other in the diverse crowd stood up and spoke about their tribulations – loss of loved ones, joblessness, homelessness, depression, suicidal thoughts – and how the teachings of Buddhism helped them overcome.

Sitting in the crowd eagerly listening, clapping and showing support for each speaker was Rocky Carroll, a gay Atlanta man and manager at Boy Next Door. He’s fully embraced the Buddhist teachings since joining SGI last April, but he had to get through an awkward first impression after witnessing the chanting that begins and ends each service.

“At first I was like wow, this is super alien. What is happening?” Carroll said, laughing. “I grew up Methodist so it’s kind of like totally opposite from what I had growing up.”

But, like many LGBT people, he needed something different after souring on Christianity.

“To me, it was hard to grow up LGBT and then still be with that because I never felt accepted,” he said.

Acceptance came quickly at SGI, when on his third visit, Carroll was asked in a group meeting what he did for a living.

“I told them that I worked at Boy Next Door and that it’s a gay store,” he said. “And everyone was like ‘oh cool!’ They didn’t even blink twice. No big deal.”

He stuck with it and continued to go, learning more and more about Buddhist teachings and how they could be applied to his daily life.

“It helps me to step back and look at everything logically so that I can make the right decisions and don’t get stressed out over things that aren’t necessary,” he said. “[SGI is] one of the first places that I’ve been to where they don’t ever make me feel separate or different than other people, like maybe I need to work on something to get to some other level. They don’t ever do that.”

SGI supports practitioners of Nichiren Buddhism, a type focused on chanting and devotion to the Lotus Sutra, a kind of Buddhist Bible. SGI claims more than 12 million members in about 190 countries and territories worldwide.

Buddhism is the fourth-largest religion in the world with over 500 million members, according to the Pew Research Center, and, like Carroll, many LGBT people turn to the religion and its teachings after a falling out with Christianity.

SGI isn’t the only affirming Buddhist center in Atlanta. The Shambhala Center of Atlanta in Decatur has a monthly LGBT Sangha (or community) where members meditate and have a reading and discussion on the dharma (or teachings of Buddha).

Edwin Ashurst, a gay Atlanta realtor, co-founded the group about five years ago. It’s not that LGBT people aren’t welcome in the main Shambhala Sangha, he’s quick to point out.

“It’s because there is just sometimes when you want to talk with somebody that’s been through it and has seen things through a similar lens of experience,” he said. “I think it’s more of a safe entry for people that aren’t sure in many cases, and in many cases they just absorb themselves into the Shambhala Sangha at large.”

Ashurst says that they’ll continue to have the LGBT Sangha especially now because, as he says, “Things are going to get rough again” under a Donald Trump presidency.

He said things were rough for him growing up in the Southern Baptist church as a gay kid, and that he felt “totally rejected” by Christianity.

“My personal journey was through trying to reconcile Christianity through who I knew I was,” he explained. “I knew that God was love. I believe that you can only believe the short verses in the Bible because there’s less room for a lie or a misinterpretation to fit it. So I took that line. As I grew older, I just couldn’t reconcile the rest of it. But love, compassion, empathy – that’s what always rang true to me.”

The Shambhala Center offered an inclusive environment for him to explore Buddhist teachings. Sally Larrick, assistant to the director at the Center, said the nonjudgmental nature of Shambhala Buddhism is probably one of the things that attracts their many LGBT members.

“We don’t judge our thoughts,” she said. “By sitting on the cushion and doing this technique of letting our thoughts go, it makes it easier to do that in our everyday life. It gives more space around relating to other people and also how we talk to ourselves in our heads. This community is very welcoming to anybody. There are many LGBTQ people who belong to this community and it’s no big deal.”

But both Larrick and Ashurst point out that not everybody at the Shambhala Center is Buddhist, nor are they required to be. There are Christians, Muslims and atheists among the members, Ashurst said.

“It’s just a huge combination of people and we just subscribe to the same basic tenet of humanity that we’re all basically good as we are, as we’re born,” he said. “We started out basically good and we’ll always have that with us no matter what happens.”