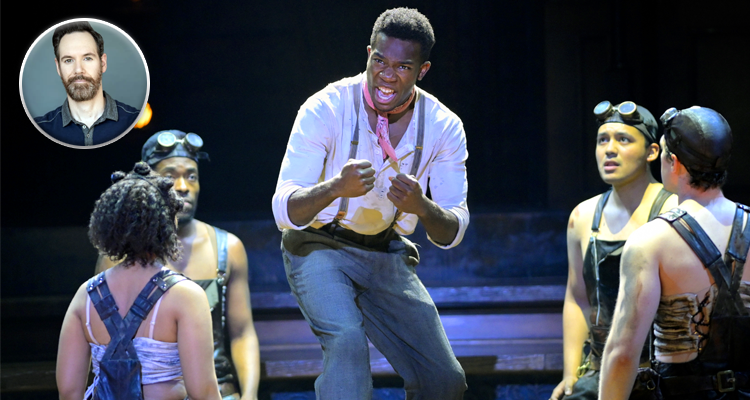 It was the big Broadway production of 2019, winning eight Tony Awards, including one for Best Musical. Now “Hadestown” is on a national tour, stopping at the Fox Theatre next week courtesy of Broadway in Atlanta.

The actor has an elevator pitch for those unfamiliar with the show: “It’s an original and inventive re-imaging of two ancient Greek myths, told through a genre-defying [score],” he said. “The music is a style you typically don’t hear in musical theater, and that alone is a reason to see the show. It hits so many chords and has so many great lessons that can be garnered by all of society.”

Hades is the lord of the dead, who oversees the underworld, but in this production, he is re-imagined as a wealthy, heavy-handed big business owner. One of the lyrics in the show says he is a mean old boss with a silver golden scale, according to Quinn.

“He is the kind of boss no one wants to have, but I believe he is a product of circumstance and is somewhat misunderstood,” he said. “He and his wife are separated, and his fear that she might not return fuels him with jealousy and doubt. It starts a series of events that causes the relationship to sour, in terms affecting the lives of the living and the souls of the dead.”

Playing a character that has been written as a very old man presents some challenges, as Quinn himself is only 43. The producers did not direct him to physicalize being old, but in his performance he feels it was vital to bring to life the character’s attributes — royal, powerful and menacing.

In addition to the critical acclaim, “Hadestown” has been a profitable production as well. That does not surprise the actor. He auditioned via self-tape, a now-common occurrence in the industry due to the COVID-19 pandemic, and then did some in-person tryouts before landing the role in the touring version. Before going in he was familiar with the score and that the musical revolved around Greek mythology, but had not seen it. When he finally caught it, he was impressed by its layers and its diversity.

“I think there are so many different aspects to the show not just in the story and the messages of love and big business and climate change but it’s also in the casting,” Quinn said. “It really runs the gamut of all different sizes and shapes and diversity. The casting is very inclusive of all colors and sexuality as well. [The producers] have been great specifically seeking out different types to fill the stage. I hope it is recognizable from the audience’s perspective. Whether or not people voice that they recognize it, it is opening people’s eyes up.”

That diversity is one reason LGBTQ audiences like “Hadestown” so much.

“The story is about love,” Quinn said. “Love, I think is colorless; love is blind. The label of love is available to anyone because our show is so diverse and inclusive that people see their stories reflected onstage. That is a testament to the (work). It shows people no matter how you are raised or what kind of background you may have been brought up in there are so many ways to love and people need to open their minds and hearts to recognize that.”

Quinn is no stranger to the Fox Theatre or touring shows, having been in the “Finding Neverland” tour, which played in Atlanta in 2017.

Besides its Tony Awards, “Hadestown” made history in another way. Singer-songwriter Anaïs Mitchell is responsible for the music and lyrics as well as the book and only four times in Broadway history has a woman been able to accomplish all of that. Her memorable score won her a Tony Award.

Next weekend, Out Front Theatre Company has a special two-day gig, the world premiere of “Red: A Crayon’s Musical.” Based on Michael Hall’s acclaimed “Red: A Crayon Story,” the play has a book by Ben Thorpe and music and lyrics by Grammy nominee (and Atlantan) John Burke. In the new work, a blue crayon, mislabeled as Red, is having a tough time but makes a friend who changes his life.