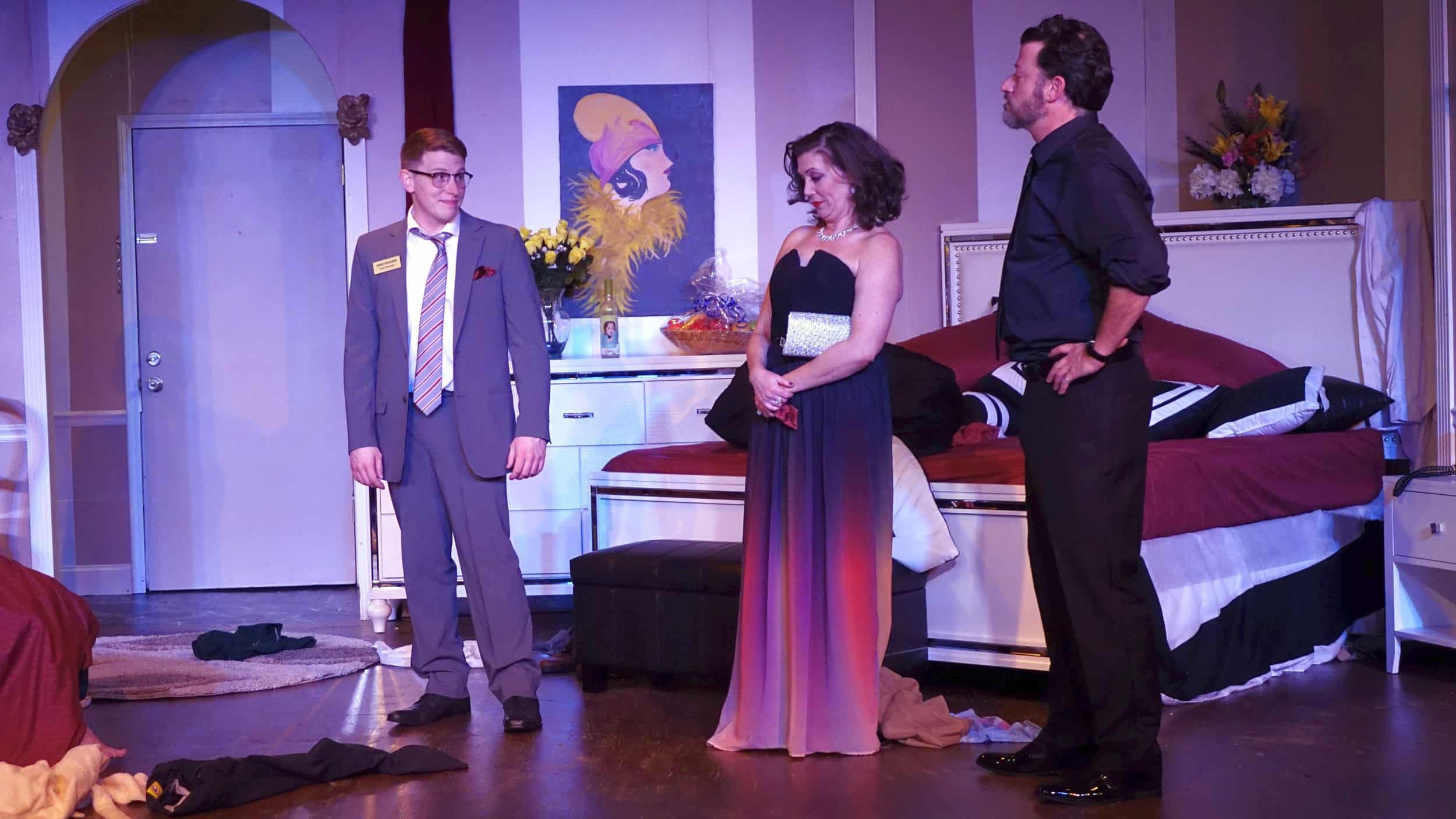 A naked — and dead — male prostitute drives the action in the new play “Clark Gable Slept Here,” which just opened at ART Station in Stone Mountain.

A fairly new play that made its debut at Zoetic Stage in Miami in 2014 and is making its Georgia premiere, it’s directed by Paul Conroy, who also serves as the artistic director at Out Front Theatre Company, the city’s LGBTQ theater company. On the night of the Golden Globe Awards, the corpse of a male prostitute is found in the hotel room of a closeted action film megastar — himself nominated for an award that night for a rare drama outing. Super agent Jarrod “Hilly” Hillard is called in to address the problem and save the day, with the help of fixer Morgan Wright. Rounding out the characters are a hotel maid and the hotel manager.

At least two of the characters — the male prostitute and the closeted actor — are gay. (The actor is never seen but his voice is heard at the awards ceremony.) The play is written by openly gay playwright Michael McKeever, who was in the original production as the hotel manager.

Having previously directed a co-production version of “Buyer and Cellar” — which also contains a gay character — last season at ART Station, Conroy was also asked to direct this. He sees it as a multi-layered show.

“There is definitely a comedic bent in it with some of the situations,” he said. “Everything is not as it should be. It’s not a farce, though, in the classical sense, with multiple doors and people in disguise.”

“He is a little neurotic and has a lot on his plate, dealing with an issue he doesn’t want to deal with,” Thorpe said.

Thorpe finds the show very topical, with its closeted superstar.

“It’s a comment on how Hollywood treats gay actors and the closet,” he said. “It has a lot to say about how we can lift up certain people, and their sexuality can’t be talked about — and the lengths people will go to cover it up.”

Jessica McGuire, who is also out, plays the maid, who speaks Spanish and has trouble communicating with others around her.

“There is a bit of fear because there is this dead guy in the room she is cleaning and she is not sure what has happened, or if she will be blamed,” the actress said.

Both Thorpe and Conroy acknowledge the play is slightly risky fare for ART Station, which generally doesn’t tackle LGBTQ work. Conroy thinks the company is trying to diversify their audience.

Since opening Out Front, Conroy has been able to direct elsewhere from time to time.

“I think it is important for theaters in Atlanta to try to work together and share artists when the opportunity is available,” he said.

The day after this show opens, Out Front opens Bathsheba Doran’s “The Mystery of Love and Sex,” about the relationship of two friends and how it changes over the years. Yet Conroy is not directing that show — he has let that fall to Amber Bradshaw