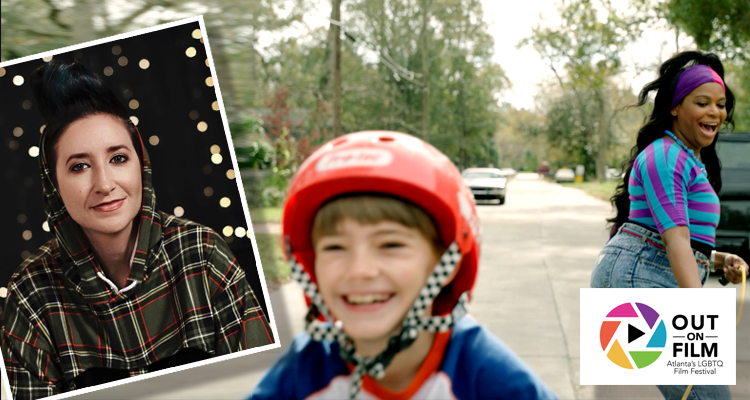 “Bittersweet and compassionate” are two words Lisa Donato, director of the film “Gossamer Folds,” used to describe her film, which will be one of several showcased during the 33rd annual Out On Film Festival later this month.

With “Gossamer Folds,” Donato makes her feature directorial debut, and it was just the project she had been hoping for in her career. She is most noted for her short films, in which she tries to change old stereotypes surrounding the LGBTQ community. “My work is my activism,” Donato said of her mission.

It was because of her body of work that the queer director was picked by Yeardley Smith, co-founder of Paperclip Ltd., to produce the film. Smith is known not only for voicing Lisa Simpson on “The Simpsons,” but also as an active ally for the LGBTQ community.

Halfway through the script, Donato knew she wanted to be a part of bringing the story of two unlikely friends to the screen. “It normalizes the life of a Black trans woman and goes against so many of the negative images,” Donato said. According to Donato, “Gossamer Folds” is “about the beautiful friendship that starts between two people who you would never put together.”

The movie takes place during the summer of 1986, when ten-year-old Tate Millikin is uprooted and forced to move to the suburbs of Kansas City. When his transphobic father discovers that their next-door neighbor is a trans woman named Gossamer, he forbids Tate from even saying hello. As his parents’ marriage unravels, Tate defies his father’s orders and forms a powerful bond with Gossamer and her father, Edward, a retired English professor.

For Donato, true representation was key. Referring to the 2020 documentary on Netflix that showcased the depiction of Hollywood’s impact on the trans community, “Disclosure: Trans Lives on Screen,” she said, “85% of Americans don’t think they know a trans person. So many Americans get their information from the media and what they see is a lot of negative images — violence and death.” With her latest project, she is trying to change that.

For the leading role of Gossamer, Donato didn’t even think of hiring a cisgender actress — “Representation is huge,” she said. Donato eventually found the perfect actress: Alexandra Grey, who is best known for her roles in “Transparent,” “Empire,” and, recently, “The Alienist: Angel of Darkness.”

“The role really resonated with her,” Donato said of Grey. For Grey, she was playing a character that was all too familiar to her. The actress grew up feeling trapped in a small Illinois town and dreamed of making it to California to become an actress.

This film is important on many levels, but perhaps the most important for Donato is normalizing a Black trans character. “It’s showing a healthy relationship between a Black trans adult and a child,” the director noted. “You never see that happen.”

The perfect actor to play the role of Tate was Jackson Robert Scott, who’s known for his role in the remake of Stephen King’s “It.” Donato said Scott has a huge teen following and many of those fans have been checking out his latest role of Tate as the movie makes its way through virtual film festivals. Despite being a different sort of part for the young actor most known for his roles in horror movies, Donato said his young fans have been engaging in great dialogue surrounding the movie.

“Gossamer Folds” is lined up to be showcased at about 20 film festivals this year through October. Donato would love to have the film reach small rural areas as well, so that people in those areas get the opportunity to see trans characters and to see their stories. So far, the film has been well received. The goal is to have a distribution deal for the film, and if all goes well, Donato said maybe it will be on Netflix or Amazon. If that happens, the film will reach a larger audience.

To get the chance to see “Gossamer Folds” or any of the other films during Out On Film’s 11-day celebration of different stories, passes and ticket packs are available. You can purchase all-access passes to see as many films as you can. We also have ticket packages that give you discounts when buying five or 10 tickets. Single tickets are $10 and will allow you to watch your selected film and a live stream Q&A if one is scheduled.

For more information and to purchase tickets, go to the Out On Film website at outonfilm.org.