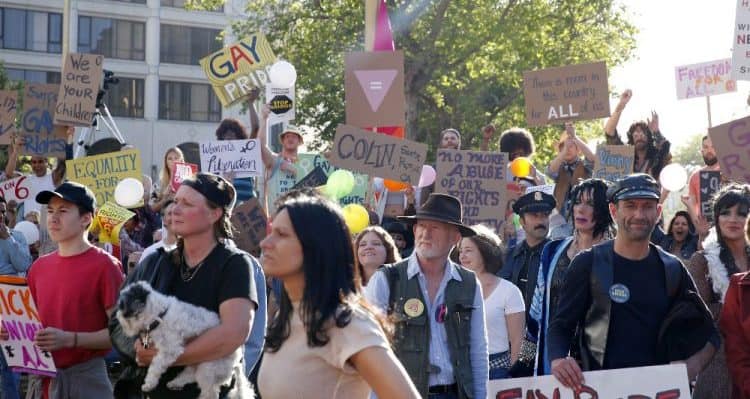 WHEN WE RISE - "When We Rise" is written and created by Academy Award winning screenwriter Dustin Lance Black. This mini-series event chronicles the real-life personal and political struggles, set-backs and triumphs of a diverse family of LGBT men and women who helped pioneer one of the last legs of the U.S. Civil Rights movement from its turbulent infancy in the 20th century to the once unfathomable successes of today. (ABC/Ron Koeberer) WHEN WE RISE

With an emotionally resonant acceptance speech, Dustin Lance Black accepted the Oscar for Best Original Screenplay in 2009 for “Milk,” a powerful tribute to gay political hero Harvey Milk. Could an Emmy be next?

It’s possible, even if the 42-year-old Sacramento native is too modest to admit that his latest screen ambition, “When We Rise,” the accomplished filmmaker’s tremendous seven-part undertaking chronicling the progressive uprising of the ’60s and ’70s, is certainly golden statue-worthy. Partly inspired by LGBT rights activist Cleve Jones’ memoir, “When We Rise: My Life in the Movement,” the miniseries sheds light on our foremothers and -fathers who raised hell – working to combat misogyny, homophobia and racism – to create a changed world for future generations of, as the show declares, “others.”

“When We Rise” is shockingly relevant, especially considering its half-century-old history isn’t just history – it’s the reality for queer people in Trump’s America.

How was the idea for “When We Rise” first conceived?

I toyed with the idea for a long time. After “Milk” was over, I started to think about other stories that need to be told, and I’m doing other LGBT-themed history projects, but I always wondered, “Was there something bigger, and how would I go about doing that?” As I met people – activists – along the way, I would sort of catalog their names in my head in case I ever got the chance to do something like this, and it was ABC saying they would actually pay for a year of research to really figure out who to depict that set it in motion.

So, it was always something I wanted to do, and I thought ABC was the right home for it. So then, at great personal expense, I set out on a journey. Let me just say nobody made any money off this thing. If anything, my poor agent and business manager were sweating it as we got it to year four.

You have Rachel Griffiths, Mary-Louise Parker and Guy Pearce, and then a terrific cast playing them in their youth. How did the casting process work for this? Did you have any of these actors in mind while researching the real-life person they’re playing?

I never think about who will play the parts while I’m writing if it’s based on a true story because I’m working so hard to get the real people right. Certainly, by the time I was writing the finale, I started brainstorming, and I had one dream for (lesbian women’s rights activist) Roma Guy and that was Mary-Louise Parker, and I had one dream for Cleve Jones and that was Guy Pearce.

Then, I got this very emotional, beautiful phone call from Michael K. Williams (who plays Ken Jones, African-American community organizer) while I was at the airport scouting locations in San Francisco. He told me how personally meaningful the scripts were to him, and he talked about the people he lost – his friends and fellow artists in New York – when he was growing up, and I could just tell it was coming from a very personal place, so you can’t beat that personal connection.

The young cast – we went out searching, and we just wanted to cast the very best people. (Transgender civil rights leader) Cecilia Chung was a really interesting one to me. I had said to my casting director that I only wanted to cast trans actors and actresses in the show to play the trans roles, and they brought up Ivory (Aquino) to play Cecilia Chung. I got a little upset with him and said, “You know, I told you it’s important we make an effort and cast trans actors and actresses for these roles,” and he said, “We think you need to get on the phone with Ivory,” and Ivory came out to me as trans on the phone call. She’s now come out to the world.

We both tell stories about LGBT people, and I imagine, like me, you hope that non-queers see your work and come away with a sense of just … humanity.

That’s the key, isn’t it? Listen, this show is for ABC. As a kid who grew up watching ABC in the South in a Christian, military home I knew I could show up at the dinner table with all the laws and facts and science I wanted and I wouldn’t change a single mind. You want to change a mind in that other America? You gotta lead from the heart, and you do that by telling stories, not by arguing facts or the Constitution.

So, that’s what I came armed with for “When We Rise.” I went out and did my best to find true stories – in particular, stories of families, because the family story transcends these two Americas. There’s not a lot we think we have in common right now, but both Americas have family stories, and we can both be moved by each other’s family stories. That’s why I mine family stories: the families we lost when so many of us were outed or came out, the makeshift families we had to build to survive and eventually the families we were able to build and raise.