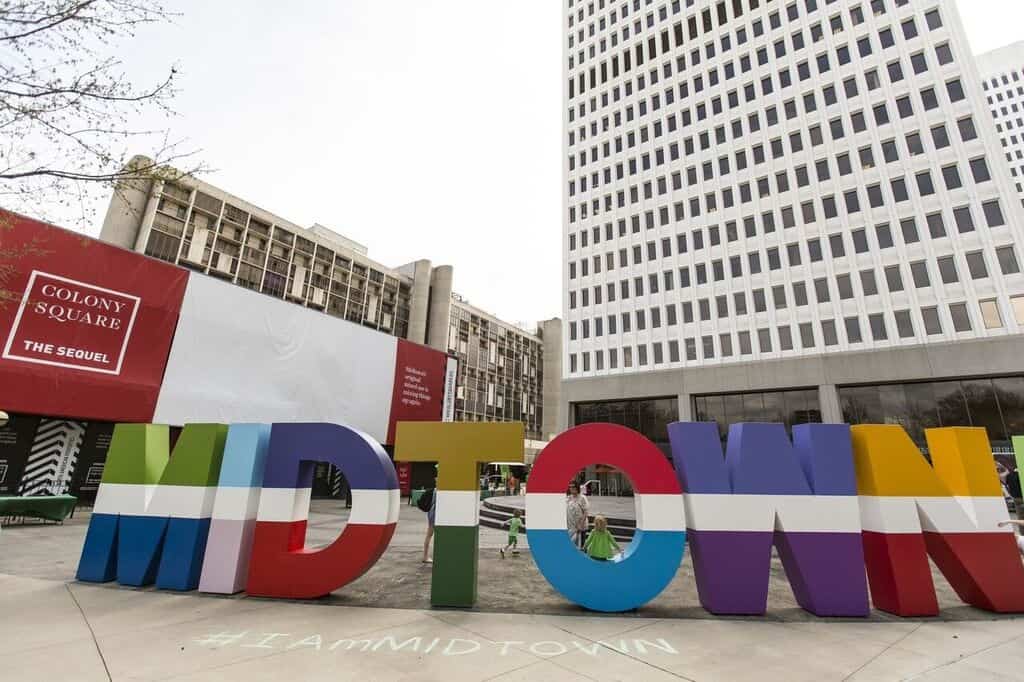 If you’ve ever been to the food court at Colony Square after 5 p.m. on weeknights or anytime during the weekend, you wouldn’t be surprised to see tumbleweed blowing by. The place is a ghost town, standing in stark contrast to normal workday hours when the place is bustling.

Well you’re about to see major changes at the bustling intersection of 14th Street and Peachtree Street as developers plan to rip the roof off the retail core of the property and connect it to the street, transforming it into a walkable, open-air space. It’s one of many changes in store at Colony Square—one of which is already in place as those who’ve driven or walked by there in the last few weeks can attest.

The makeover’s roots can be traced back to last December, when Houston-based Lionstone Investments and North American Properties (NAP) acquired the longstanding mixed-used property. Lionstone might not ring any bells but NAP should—they’re behind the turnaround of Atlantic Station and the development of Avalon in Alpharetta.

“Over the decades, the Midtown neighborhood around Colony Square flourished while the iconic building became sleepy and tired,” said Mark Toro, managing partner of NAP, in a statement. “On July 4, 2018, the 50th anniversary of Colony Square’s groundbreaking, we will celebrate the grand opening of the reimagined Colony Square. We will engage with the city, with the street and with pedestrians, and it will fundamentally change the experience of living and working in Midtown Atlanta.”

In the meantime, new restaurants and shops will continue to be added to the space, but the developers are seeking feedback from the public first by asking them to share ideas for Colony Square with the hashtag #ReimagineCS.

Some plans in the works include the showing of holiday movies on an outdoor screen (a nod to Georgia’s booming film industry) and a partnership with Midtown Alliance to “adopt” the nearby Arts District Plaza, where events will be staged for Colony Square tenants and the Midtown community.

Toro added, “As with our other mixed-use projects, we will curate the right tenant mix, layer in resort-inspired hospitality and exceptional experiences, to significantly and positively impact the value of the development. Our first step is to listen to the community stakeholders and guests as they are integral to the transformation. We look forward to premiering Colony Square – the Sequel.”

The first sign (literally) of change at Colony Square debuted on March 12, as colorful 8-foot tall letters spelling “MIDTOWN” were unveiled in the plaza at the first annual Luck of Colony Square event, timed to occur after the annual St. Patrick’s Day parade streamed by.

Guests also sampled bites and drinks from new Colony Square restaurants 5Church (which moved into the spot formerly occupied by Shout) and Establishment (which moved from its previous location in Buckhead).

“Because of Colony Square’s central location, it was a perfect opportunity to launch a new holiday celebration for the Midtown community after the parade,” said Liz Gillespie, vice president of marketing at NAP, in a statement.

Transportation options to open up

NAP also announced the creation of a full-time “mobility concierge” at Colony Square to work with tenants, guests and the Midtown community to identify transportation and mobility solutions and incentivize their use. The installation of TransitScreens providing real-time transportation options is in store as well. The move makes sense considering the property has the highest pedestrian count in Atlanta outside of Georgia Tech’s campus.

“We are a nexus of bike lanes, streets, sidewalks and transit,” said Toro, who says he often walks to work. “On any given day, you are bound to see several Ubers waiting in Colony Square’s roundabout. The mobility concierge will readily help the community utilize these transportation alternatives in order to make Midtown a more mobile community and give our tenants, guests and residents a better quality of life.”

Such initiatives appeal to millennials, who rank transit access as an important factor (according to a recent poll by the Urban Land Institute) and who make up approximately half of Midtown’s residents according to the Midtown Alliance.

“Walkability, bikability and accessibility to public transit are huge motivators for the new generation of office workers and intown residents,” said Shannon Powell, executive vice president and COO of Midtown Alliance in a statement. “NAP’s unique mobility initiative will make Colony Square and the greater Midtown community a better place to work, live and spend time. Their mobility concierge will work hand-in-hand with our team at Midtown Transportation to heighten awareness of options.”