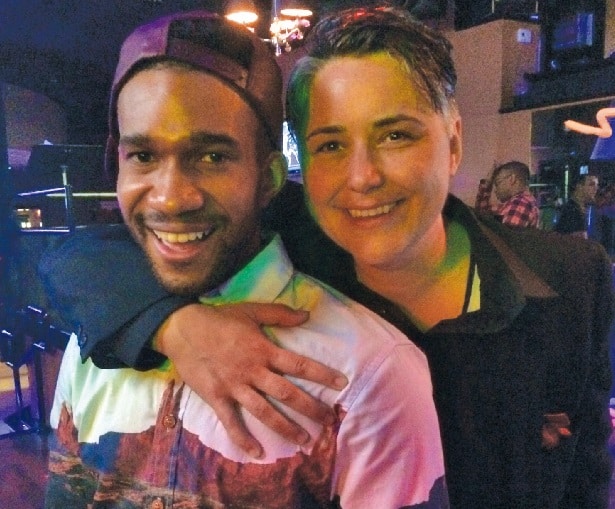 Mettle & Pluck Are At It Again

Jamie Roberts
Culture
September 27, 2018
The Atlanta gay- and lesbian-owned production company has a second doc in the works.


Heather Provoncha and Leo Hollen, Jr. are the founders of Mettle & Pluck, the local film production company that produced the film “Queer Moxie,” now available to view on Amazon.com. Leo was inspired in childhood in Ohio by movies such as films by Stanley Kubrick, Disney’s Ursula in “The Little Mermaid,” and later “Dazed and Confused.” By middle school, he was writing screenplays. Leo made his first documentary in high school, interviewing friends and strangers and editing it on equipment his mom bought for him. When he saw people in tears over his film at its first exhibition, he was hooked. He later took film theory courses at Georgia State University. He craved to see himself on screen, see stories like “boy kiss boy.”
Heather, originally from Vermont, began her career in social services as an expression of her high regard for people. She also enjoys film and art that celebrate and uplift people, especially those on the margins overcoming adversity. She recalls the first lesbian film that really touched her as “When Night Is Falling.” She found herself in the close-knit LGBTQ community in Burlington, where she became a stage manager for local drag shows, as well as host to open-mic competitions. She moved to Atlanta looking for a city with more people, diversity, and weather.
When she got to Atlanta in 2003, she noticed how segregated our queer spaces were by gender and race. She was inspired by all the various queer groups and events in town like The Dixie Pistols, The Atlanta Kings, the Femme Mafia, the organizers and performers of MondoHomo, and spoken-word artists like Theresa Davis. Sometime around 2009, Heather began dating a burlesque dancer. As the relationship developed, Heather cut her hair, wore suits, found her ‘inner gentleman,’ and began performing onstage as “Danny.”
Heather started to record footage of performances at the Moxie Cabaret scene at the time, at first to help her girlfriend and other performers see what they were doing. She enjoyed being invited backstage, as well as being part of the audience. She also enjoyed comedy and spoken-word performances that were part of the scene. A concept for portraying this diverse community formed in her mind by “flipping the script” and featuring performers of color, trans performers, drag kings, and other queer artists rather than simply drag queens. “I hit record and started,” she tells us. “I didn’t know how I was going to get there.” Fueled by coffee and supporters along the way, she learned the business as she went.
The company began several years ago in 2013, after Heather and Leo met at a coffee shop in Virginia Highland. Leo told her about his film experience and agreed to film some footage for her at a performance at the Jungle. Leo’s ability to write and edit added new momentum to the “Queer Moxie” project. They began releasing trailers for the film in 2014 and wrapped production on the film with their last interview of Georgia-born punk legend Jayne County in 2016 at the Earl. Leo regards it as a love-letter to the community, a film that “is truly an independent movie … self-funded, written, edited, directed, distributed.”
Their company, Mettle & Pluck, emerged near the end of post-production for “Queer Moxie.” In the middle of post-production, the computer Leo was using quit working as the movie was so big, it outstripped the capacity of his computer’s processor. Therefore, one of the first purchases they made as a company was a computer with the capacity to finish the editing. They realized that they worked great as a partnership, and sought to formalize that relationship. As they brainstormed synonyms for the word “moxie,” they came up with “mettle” and “pluck.” They joked “Moxie, Mettle, and Pluck – that sounds like a law firm!” They name seemed to encapsulate what it takes for outsiders to get on stage and take up space. Heather sums up their mission: “We intend to have an impact on the world as much as to tell a story.”
Their idea for their new feature documentary, “XOXO: For the Love of Football,” began from a specific interview during the production of “Queer Moxie.” During an interview of Sir Kam’ron, an accomplished pageant artist, they noticed a lot of medals and trophies behind him. They asked him if they were his, and he said that they were part his, but the rest of them belonged to his girlfriend who not only won many of them in beauty pageants, but also from playing tackle football. A friend of theirs made the immediate comment, “Now that’s a story I’d like to hear!” Leo and Heather agreed. Following a tour of film festivals for their first film, they met Carla “Smiley” Odum, who introduced them to the sport and became crucial to creating their narrative of the film. They went to national tournaments and met gold-medal Olympians who participate in the sport.
Leo says that XOXO isn’t meant to prove that women can do anything — “We already know that. What it’s showing is how amazing they are at what they do in their game, in their life, and presenting it to the world.” The film is set to premiere in spring of 2019. Lee and Heather also produce a podcast, now in its second season called “Double D” with Destiny Streeter and Dylan Walters. “They’re really funny people, one an entrepreneur, one an artist. They talk about their lives, pop culture, as two Southern queer women.”
You listen to the Double D podcast at their website MettleAndPluck.com.