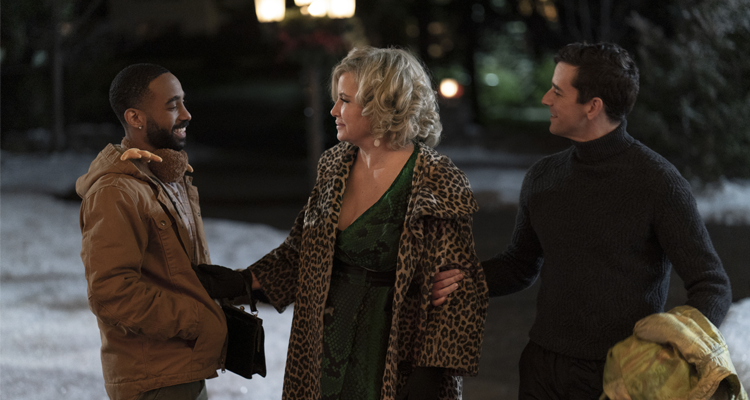 It’s safe to say that during the holiday season, Christmas rom-coms are a constant go-to for actor Michael Urie. He loves the genre, but he started acting in them begrudgingly because of his partner Ryan Spahn’s and his family’s love for them.

“I have an aunt who watches them year-round,” Urie told Georgia Voice. “They are a phenomenon.”

Urie stars in the new gay holiday movie, “Single All the Way,” which has just premiered on Netflix. In it, he plays Peter, a gay man who always seems to be single. Not wanting his family to meddle in his love life this season, he invites his best friend Nick (Philemon Chambers) home to pretend to be his boyfriend. Peter’s mother (Kathy Najimy), however, has already set Peter up on a blind date with her hunky trainer (Luke Macfarlane). The film also stars Barry Bostwick as Peter’s father and Jennifer Coolidge as Aunt Sandy.

The actor had always wanted to be in a romantic comedy, and while there are few queer ones in the mainstream, this one promised to be high profile: “You don’t get much more mainstream than Netflix.”

Urie was already a big fan of the work of Chad Hodge, the film’s writer, so when the script came his way, he jumped at it.

“It was such a great script, sweet and so funny,” he said. “The roles were so choice — Mom and Aunt Sandy and the gay guys. Michael Mayer is such a great director, and this was exciting. I really wanted to be a pioneer in this genre of queer holiday rom-coms.”

Having watched the film recently, Urie said he was pleased with how it came out.

“Sometimes you make a movie or a TV show and you have an idea and — it’s not like that,” he said. “You never know how it’s going to turn out. This came out exactly how I wanted it to.”

Urie is also proud to be making a queer film that isn’t about coming out, homophobia, shame or trauma.

“It’s about finding love, being single and having a meddling family and Christmas,” he said. “All of these things that are universal; straight people go through these things. Queer people deal with these, too. We have a protagonist who is gay but none of the conflict in his life surrounds being gay. That’s refreshing. There is a place for those movies that help spread awareness of homophobia and all those things that have made queer cinema vibrant all these years, but now we are in a place where we can share these stories of the ways in which we are the same. We don’t just have to share the ways we are different.”

The film is also a reunion for Urie and Macfarlane, who were classmates at Julliard, Urie said: “Luke has been in dozens of these Christmas movies as a straight guy. He’s gay. He is like a brother. Going to drama school together is like family. Getting to reconnect after all these years to work in a genre that he knows so well was lovely.”

He was also impressed with newcomer Chambers.

“We read together on Zoom during the pandemic,” Urie said. “That is how we met, and we did a chemistry read together. From the moment we started acting together, I knew he was terrific. I see the truth in his eyes. He is beautiful. He is adorable and funny, and I hurt when he hurts.”

Urie shot to fame in the ABC series, “Ugly Betty.” The actor also appeared earlier this season in the well-received gay-themed film, “Swan Song,” and next year he’ll be seen in the horror thriller, “Summoning Sylvia,” and as Bob Crewe in “Jersey Boys Live!”

“Single All the Way” is currently streaming on Netflix.