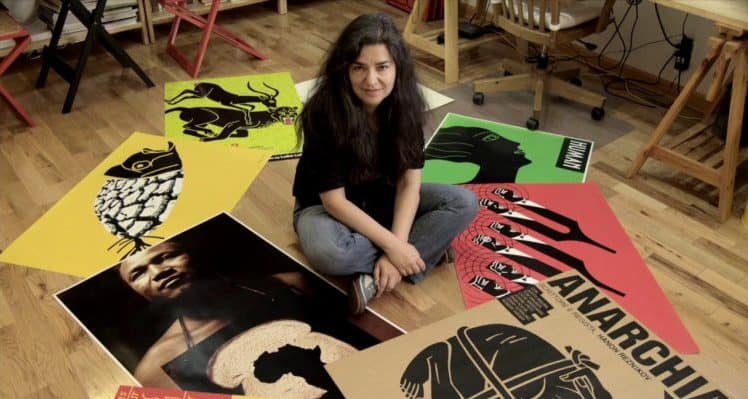 Luba Lukova wanted to have a purpose to her paintings.

“[Activism] is the purpose of art, of any genre of art, in a way. Not just to entertain, but to say something meaningful about our time and we know that anything is possible in art,” Lukova said. “You’ve spent so many years learning how to draw … why this skill just to put something together that is beautiful? Maybe it could be used in a way also that you really speak about today in a way that not just tells people, ‘this is right, but this is wrong,’ but present it to them so they can think and they can answer for themselves.”

Lukova, who majored in poster design in Bulgaria, immigrated to the US in 1991. She originally landed in Colorado for an art exhibit. After that, she went to New York — and decided to make America her permanent home.

This summer, her social justice poster portfolio is on display at the Museum of Design Atlanta.

“We think about design as a tool for making a difference, and so much of her work is about issues that we’re all talking about right now. It’s really timely,” said Laura Flusche, MODA executive director. “She has a really amazing ability to present both sides of an issue.”

Lukova is known for her bold, graphic poster work, and she also does illustrations for periodicals that address issues of social justice and human rights. For New York Pride last year, for example, she was commissioned to do a large piece inspiring unity. The 60 posters on display at MODA cover myriad topics, including health care, women’s rights, ecology, gender inequality and war.

“It can spark dialogue, and there are some really important issues that the United States and the world are working on right now, and seeing her work brings a lot of questions to mind. It can get us to talk to each other, or maybe understand each other a little better,” Flusche said.

Lukova was heavily inspired by her grandmother, who was also an artist in Bulgaria.

“She was a painter and also she did furniture and textile design, but most of all she was the one to really draw and paint. I loved it,” Lukova said. “She would just give me a sketchbook and a pencil and a brush and when I was too wild and running around, she would keep me calm. Naturally, I kind of mimicked her and I never had any doubt this is what I wanted to do.”

While at university, Lukova chose to study poster design because at the time, it was “considered the most intellectual major.”

“I’m trying to kind of say something that helps us understand a little bit better what’s happening around us,” she said. “I’ve never been interested in being that kind of high-end artist whose work is going to be in a gallery that only art collectors will go to, or being secluded in some hard-to-reach museum. Design is a discipline that is the most democratic way of reaching people with what visual arts do.”

Lukova’s work is different from posters many Americans may be familiar with, such as the propaganda works that feature soldiers and bombs.

“It’s always some metaphoric twist,” she said. “It’s not some kind of finger-pointing kind of telling people ‘this is right’ or ‘this is wrong.’ I try also to make it visually pleasing to have some beautiful colors and beautiful lines and something that calls to you and you say, ‘Oh, I think this is interesting.’ You look at it a little longer.”

For example, the title poster for the MODA exhibit features a pencil, which acts as both a writing tool to suggest conversation as well as a spark to activism.

The exhibit itself is interactive, with places for visitors to create their own posters inspired by Lukova’s work.

“It has an edge, it has a punch in many ways, but that’s what art is supposed to do. It’s supposed to bring controversy,” Lukova said. “Everything addresses meaningful issues, but life is not so easy to handle and the work reflects all that.”

“Luba Lukova: Designing Justice”
Through Sept. 3
Museum of Design Atlanta, 1315 Peachtree Street NE, Atlanta
Tickets: $5 to $10, children under 5 free; available at the door or at www.museumofdesign.org/buy-tickets