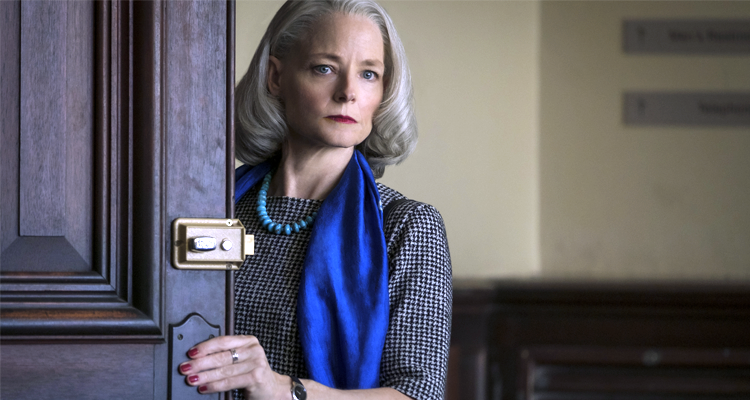 Movies to Look Out for This Season

With many movie theaters closed or at low capacity, and with audiences nervous about attending, some movies normally slated to wind up at the cinema are now showing up online or on streaming networks. There’s a decent amount of product coming our way through the summer. As always with this time of the year, the LGBTQ quotient is fairly light, though; most of it is courtesy of indie fare.

It’s been delayed several times because of COVID-19, but it looks like “I Carry You With Me” will finally make it to theaters this spring. In director Heidi Ewing’s excellent film, nominated for two Independent Spirit Awards, including Best First Feature, and a GLAAD Media Award nomination for Outstanding Film — Limited Release, one half of a young male couple in Mexico decides to come to the United States for professional reasons. The film will bow on May 21 in New York and Los Angeles and then nationwide the following week.

“The World to Come,” directed by Mona Fastvold and starring Katherine Waterston and Vanessa Kirby as lovers, debuted in theaters in February to acclaim and is now on paid video on demand (PVOD). Save for a weak ending, it’s worth checking out, especially for the acting. Another LGBTQ title is Todd Verow’s “Goodbye Seventies,” about a former chorus boy who gathers his friends to make hardcore movies.

Out actress Jodie Foster — a two-time Academy Award winner – stars in Kevin Macdonald’s “The Mauritanian,” already in theaters and hitting PVOD this week. It’s based on the New York Times bestselling book, “Guantanamo Diary,” by Mohamedou Ould Slahi about his imprisonment by the U.S government for several years. Foster plays defense attorney Nancy Hollander and has just won a Golden Globe Award for her performance. An Oscar nomination is a longshot, but a possibility.

Speaking of the Oscars, the ceremony itself will be held April 25 this year, a few months later than normal, allowing a longer window for submissions. A few films with Oscar hopes will come out in the next month or so. Florian Zeller’s “The Father” stars Academy Award winner Anthony Hopkins as a man facing dementia. Fellow Oscar winner Olivia Colman is his daughter. Both are certain nominees again this year. Azazel Jacobs’ “French Exit” stars Michelle Pfeiffer as a suddenly poor socialite who moves to Paris with her son and cat. Pfeiffer is terrific here in an overdue comeback
of sorts.

Still planned for a May 7 release is Cate Shortland’s “Black Widow,” with Scarlett Johansson playing Natasha Romanoff in a film that takes place before “The Avengers: Endgame.” It’s a big studio film that would normally pack audiences in. “Tenet” was supposed to save movie theaters last summer but didn’t, while “Wonder Woman 1984” performed well in its release, even though the film also appeared on HBO Max the same day it hit theaters. If “Black Widow” comes out and makes money, studios will feel more secure about traditional theatrical releases.

Other films with LGBTQ content include Tracy Wren’s “Rain Beau’s End,” which deals with a lesbian couple and their adopted son in a small town, with Sean Young and Ed Asner in the supporting cast, and “Wojnarowicz,” directed by Chris McKim, a documentary about downtown New York City artist/writer/activist/photographer David Wojnarowicz. When New York City became a hotbed for AIDS cases in the 1980s, Wojnarowicz waged war against the establishment for not being more proactive. As well, look for “Everybody’s Talking about Jamie” at some point soon. It’s the feature film version of the musical in which a teenage boy from England wants to be a drag queen, directed by Jonathan Butterell.

Other anticipated films for the spring include “Coming 2 America,” a sequel to the 1988 film, with Eddie Murphy and Arsenio Hall returning; “Yes Day,” in which a couple (Jennifer Garner and Edgar Ramirez) have a 24-hour period in which their kids make all the rules; and “Tina,” a documentary on the legendary Tina Turner. Also, although it doesn’t appear to have any overt LGBTQ content, the new “Cruella” with Emma Stone (something of a “101 Dalmatians” prequel) vamping it up as the Disney villainess looks like a campy good time indeed.

In theaters and on PVOD now

“The World to Come”

In theaters and on PVOD

March 12 in theaters with PVOD later

April 2 in theaters with PVOD later

“I Carry You With Me”