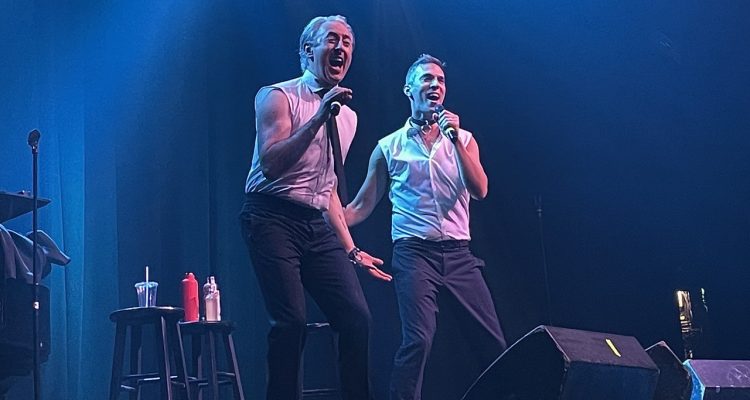 Those opening words and its accompanying melody in John Kander and Fred Ebb’s seminal 1966 musical “Cabaret” promise entrance to the debauchery, the danger, the politics, and the sex at the heart of the Kit Kat Club and its slick, multilingual Emcee. On March 29th, at the Center Stage Theater in Atlanta, a solo pianist played that melody, announcing the entrance of an icon.

As the applause dipped in the hazy room, the duo launched into a medley, showing off renowned journalist Shapiro’s secret second talent as a singer and inviting the audience into the dynamic of the self-proclaimed “Bosom buddies,” jumping between unabashed flattery and lightly prodding competition:

ARI: I can’t believe I’m sharing the stage with you, it’s so surreal, I’ve been a fan of your’s my entire life. Since I was this tall, I’ve been watching you in TV and in movies-

ALAN: So you grew up watching me, is that what you’re saying?

ARI: Since I was in diapers.

ALAN: Well, you know what Ari Shapiro? You’ll probably still be watching me the next time you’re in diapers, because I’ll still be f–king working darling!

As the medley switched to a rendition of “Anything You Can Do (I Can Do Better),” comparing their singing talent and higher education, it was clear that any competitiveness was unnecessary: they had nothing to prove to the audience.

Amongst the conversation and revelry, the draw of the show was the chemistry between two friends, sharing stories as if the audience were sitting in at their dinner parties, who nonetheless are consummate entertainers who never forget to play to the crowd.

An earnest ambition of the tour, in conception and particularly in continuing following the ongoing COVID-19 pandemic, which has often led to delayed or indefinitely postponed shows for the pair, was made clear when Shapiro solo sang a cover of Bette Midler’s song “Laughing Matters”, featuring the refrain:

People keep on getting sick.

And a nickel’s not worth a cent,

Just as peace is gaining ground it shatters.

Hate is here to stay.”