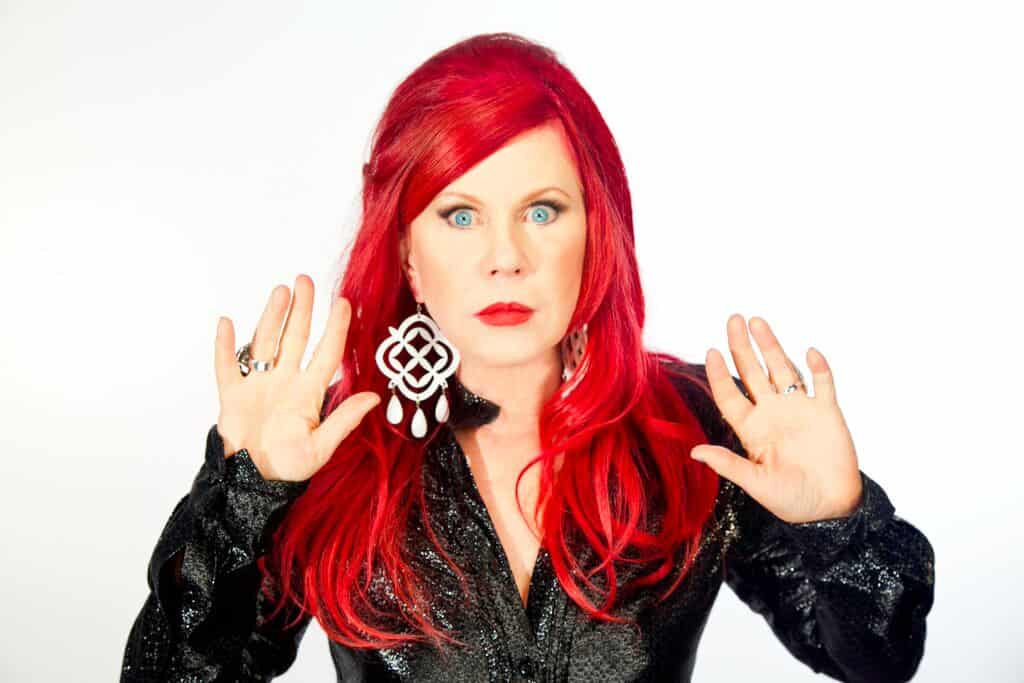 Kate Pierson is one of the iconic voices from the B-52’s, the Athens, Georgia band that began in the late 1970s and has spanned over four decades. Pierson released her first solo album, “Guitars and Microphones,” in February of this year and is currently touring in support of it. Georgia Voice contributing writer Shannon Hames caught up with her to talk about the new album, her big gay wedding plans, her rockin’ hotel business, and her upcoming shows in Atlanta and Athens.

You released “Guitars and Microphones”—your first solo CD—this past February. Tell me about it.

It’s a bunch of songs that I wrote mostly with Sia Furler. It’s something I’ve always wanted to do. I had all of this creative stuff in me but I needed help getting it out. A lot of creatives have this problem. They have this great stuff but need help getting it out into the world. Sia said she’d like to help so we flew out to L.A. and started writing songs.

Sia is a very quick writer and I had a lot of lyric ideas and song titles. I had the lyrics and song title for “Mister Sister” but things changed when we started jamming and she added some of her own lyrics. Her secret sauce is to get the melody, get the hook, get the chorus and pre-chorus and put the lyrics to that. Don’t overthink it—just do it all at once.

It was so much fun and we laughed a lot. Each song had a different third collaborator so I worried about the cohesiveness, but they came together beautifully in the end.

I was going to ask you next what was it like working with Sia Furler, but it sounds like you really had a great experience.

When I first met her, I didn’t know she was a singer. We were at a birthday party and we were all required to sing and she got up to sing and I thought, ‘Wow, this girl has a really great voice!’ So we became friends before I even knew who she was.

“Mister Sister” is about the struggles that people have who don’t fit gender-typical roles. I read that there was actually some controversy from the trans community. What were your thoughts about that?

Controversy always generates more interest but I didn’t expect for it to be controversial. It’s also not about a transgender person specifically but about anyone feeling betrayed by the mirror. The Huffington Post misquoted me saying ‘I hope that this becomes a trans anthem’—but they put in parentheses ‘gender’ and although I wanted to include transgender, I wasn’t specifically speaking about that. It also means a gay boy or girl—anyone who feels this way. It’s about loving yourself.

At first, I was hurt by the controversy but it started a dialogue about the transgender movement. They often don’t really have a voice and talking about this song was another way for them to be heard. It ended up being a really good thing with overwhelmingly positive feedback.

I heard you have some big, gay news of your own?

Yes! My partner, Monica [Coleman] and I are getting married! We are planning a Hawaiian wedding. We’re doing a simple, beautiful affair with our friends on August 3.

And it’ll be legally recognized, so congratulations!

Thanks! We actually planned the date a long time ago before we knew the Supreme Court would be ruling. We were thrilled when we heard it but I was shocked that the decision was so close [5-4]. It seems like such an obvious civil right. History will not be kind to those who opposed marriage equality.

You and your fiancée have a hotel business—one property on each coast. Tell me about those.

Kate’s Lazy Meadow is near Woodstock, New York. It was a roadside hotel in 1952. It was really dilapidated and depressing inside. But it did have great exterior so we restored it to—not its former glory—but to at least a mid-century madness glory. All the stuff in there are things I bought. Monica and I designed it ourselves with a little help from friends. It sits on an amazing creek.

We did have Airstream trailers on the creek but there were several floods so we moved them to the driest place in America, near Joshua Tree in Landers, California. That’s where Kate’s Lazy Desert is. It’s in a beautiful, pristine part of the desert right next to the Integratron, an amazing place where you can take sound baths. So even though it’s kind of in a remote area, it’s near a lot of interesting things. It has the most beautiful view of the desert and Joshua Trees.

The properties are really unique and there’s nothing else like them—especially for people wanting the experience of staying in an Airstream without the expense of an Airstream. They’re very cozy and romantic.

What are you passionate about right now?

Monica and I are both passionate about gardening. We’re very interested in the whole farm-to-table movement. We’re interested in organic and growing your own food. Monica just planted a ton of lettuce. We’ve been eating salads. We have all kinds of squash and flowers and cherry trees. She just made a cherry pie from our trees.

She sounds like a keeper. No wonder you’re going to marry her.

She’s amazing! We’re also passionate about animal rights. We have two dogs, Athena and Zeus. I just auctioned off some of my old costumes to raise money for our local animal shelter, the Animal Emergency Fund in Woodstock. Oh, and we’re also passionate about eating [laughs]!
Really, whatever we are doing together, we end up being fully involved. We totally worked on my solo record together. We worked on the hotel together. Monica launches things. She motivates me and supports me so we work together closely on everything. A few arguments here and there but not many. Even on the wedding. Even on the cake!

I’m going to let my girlfriend decide everything about our wedding and embrace what my daddy always says: ‘Happy wife, happy life.’

Who is your gay hero or heroine?

Oprah? Just kidding [laughs]! Rosie O’Donnell. Because she’s out there and she just says it—she’s an out and proud lesbian and you gotta love her fearlessness! And Queen Latifah. And Wanda Sykes! I love her, too. Wanda and Rosie were on the True Colors Tour with me. Cyndi Lauper put it together and it was a blast.

Who is your celebrity crush?

Who is that girl who is on “Vikings?”

Oh, she’s not ugly! I support your crush.

Thanks! She’s my shield-maiden crush [laughs].

Are you excited to come back to your home turf of Atlanta next week?

Yes! I’ll be at the Variety Playhouse in Atlanta on July 17th and the Georgia Theatre in Athens on the 18th. It’s a homecoming for me. Atlanta is my home away from home. Hopefully, I’ll see a lot of old friends there. It’s going to be a great show. I hope everyone will come out and see me.