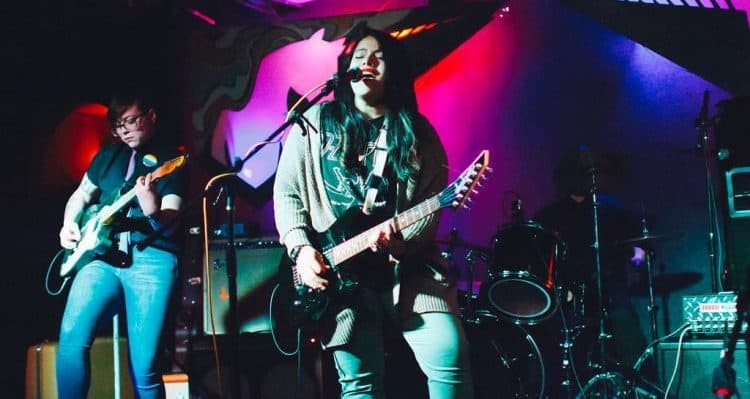 Walking closely in the footsteps of Latinx lesbian punk band Girl in a Coma, Atlanta’s own Bitter just put a queer twist on what it means to be punk.

Self-managed and produced, Bitter also just released their debut self-titled album described as “punk, ambient rock, heavy melodic rock, alternative, indie rock and dream pop.” As they prepared for an upcoming show with Downtown Boys at the Masquerade on Sept. 6, they gave Georgia Voice the lowdown on being queer musicians, their connection to marginalized people groups and dipping their musical toes into local Atlanta politics.

“All four of us identify as queer in some way and it means something different for each of us, like not being cis or straight,” said vocalist Maritza Nunez. “It means not everyone in the band being white, and having members that are diverse in their backgrounds and their life stories. For me, queer also means not fitting into a box as people or with the music we make.”

Together just over a year now, the band first came together out of sheer mutual respect.

“That’s a huge part of why we work so well together,” Nunez said. “Even before we were in a project together, we just loved each other’s music. After that house show, I asked Nadav if we could play together and then Zo joined. Since then, it’s just been a really great experience. I’m always blown away by everyone’s musical abilities.”

One of the unique ways that the band crosses over into diverse audiences is that some songs are sung in English and some in Spanish. When they perform a Spanish-language song live, Nunez notes the positive effect it has on the audience.

“I actually see them kinda stop what they are doing and try to process what’s happening,” she said. “I think they find that it’s really interesting and different. Typically, we play bars and venues that don’t really have music in Spanish.”

“It’s really important to me because I want to represent Latinx people as much as I can with my platform,” she continued. “I also have had the honor of having other Spanish-speaking people come up to me and be like ‘Wow! Thank you for doing that. It’s really encouraging and makes me want to express myself in whatever language I want to.’ To me, it’s a big deal that everyone in the band is supportive of expressing and voicing marginalized groups. Even with a small thing like singing in Spanish, it shows others that there’s no need to settle and be like every band they might see in mainstream music.”

Bitter sees the key to attracting a diverse fan base is to have a little something for everyone.

“I think because we have have such a wide variety of songs, we are able to be appreciated by all kinds of people – from parents to teenagers,” Chapman said. “We’re always trying to reach out to other queers and to people of color with our music.”

In addition to their latest self-titled album, new things are on the horizon for the band.

“We are about to get back in the studio to record a new single that we’ve performed live,” Chapman said. “We’ve also just added a very talented bass player, Haseena Peera, to our lineup. We’re super excited to play with her.”

The band is aware of the rarity of their mix of unique identities.

“As far as the queer music scene goes, ‘queer’ is such a multifaceted identifier,” Peera said. “It’s hard to know if there really is even a ‘scene’ to speak of. Anyone from any of the bands that we play with could be queer, but there really is no way of knowing unless we have personal encounters with them or they’ve identified themselves. What’s easier to speak on is the Latinx music scene. Latin punk music, in general, is not prevalent in Atlanta, and the queer Latinx punk scene is even smaller in numbers. We’re pretty much in uncharted territory, which has both advantages and disadvantages.”

Nunez hopes that Bitter’s presence on the scene will inspire others.

“Latinx people aren’t celebrated enough in film, music and television,” the singer said. “And when they are, a lot of the time, they are forced into a stereotype. I want to recognize brown girls and people of color because I see people that look like me playing music. It’s important to me because representation leads to pushing boundaries and also being able to relate to something. It’s like finding a home. It also communicates to people that are being represented that they can do this, too.”

As they continue that mission, they’re finding like-minded fans in a number of places.

“One of our best moments was recently performing a fundraiser for one of our local heroes, [Atlanta City Council District 5 candidate] Liliana Bakhtiari,” Peera said. “Not only do we all relate to her in some way as a queer, a Muslim-raised woman and person of color, but we admire what she is trying to change for our city. It was our first time dipping our toes into politics with our music. When she asked us to play, we were more than honored. It was deliciously surreal!”