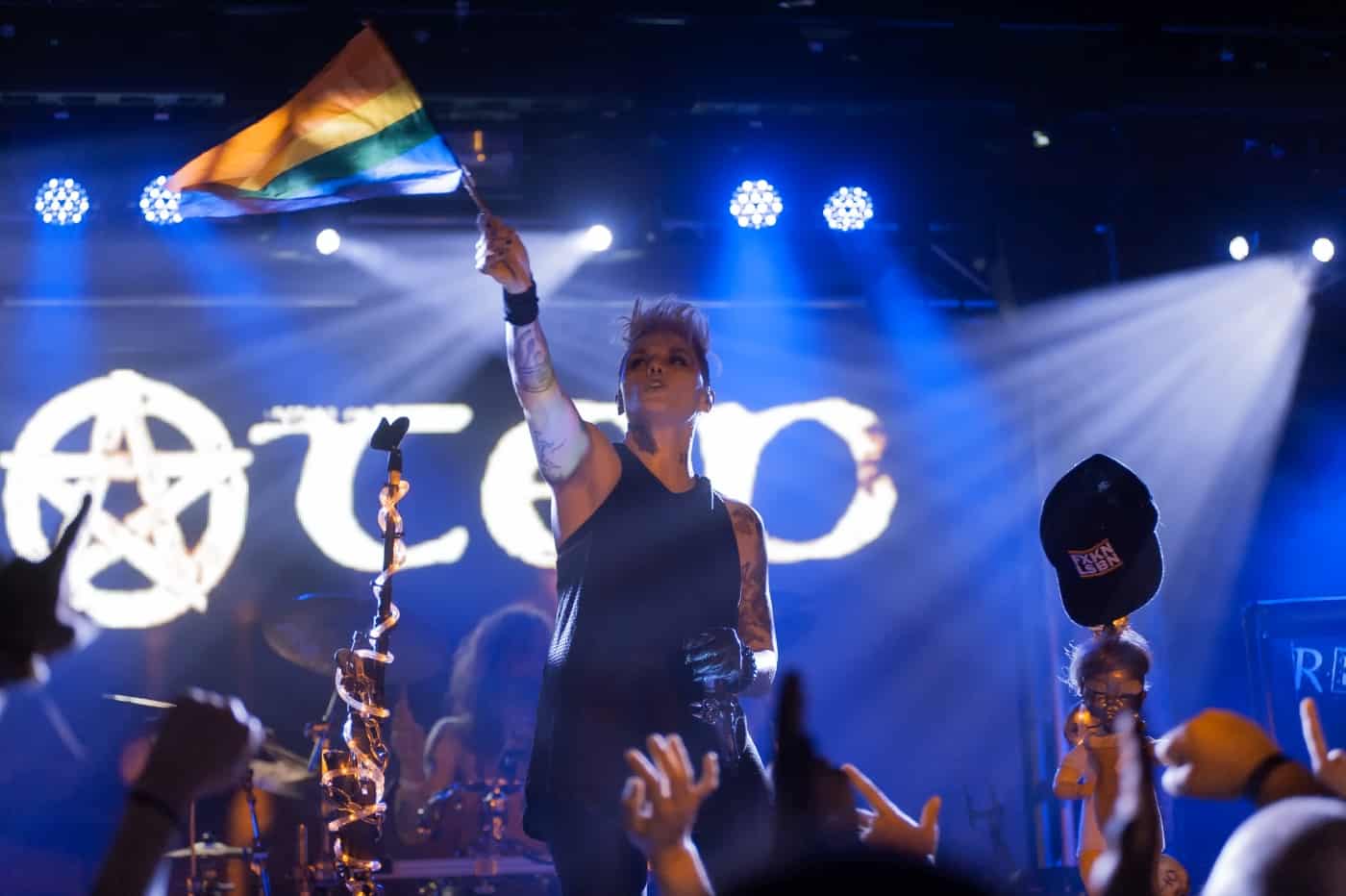 Lesbian nu-metal vocalist, artist and activist Otep Shamaya radiates her passion like a flashing, studded, spiked, light-up-the-freaking-sky neon sign. A two-hour interview (scheduled for 15 minutes) revealed her to be a bubbling fountain of political insight with a volcanic passion for fairness, equality and LGBT rights. Her mind seems to run at full-throttle. Trying to steer the conversation was like trying to steer an exploding comet.

I spoke with Shamaya in advance of her band, Otep, playing a show in Atlanta on June 7. True to form, she barely spoke about herself or her music and instead preferred to talk about the problems stemming from the current political climate surrounding the Trump administration and how marginalized groups were being affected. I was finally able to lure her away from political discourse with a pointed question.

What’s your favorite song to fuck to?

Nobody has ever asked me that! If I want it to be romantic, Goldfrapp’s record “Felt Mountain” is nice. And also “The End” by The Doors. It’s a spiritual song. If it’s going to be an aggressive night, I like a little Nine Inch Nails in there.

The way that I write my music comes from the part of my brain that is dominated by sex. The foreplay, the catalyst to conclusions, the eruptions … and, since I’m a lesbian, once isn’t enough so I keep going. I write music from that sexual perspective. This interview is the first time I’ve ever realized that my songs match up with my feral sex style. When I have sex, I want to be present and mindful of my partner. And when I’m on stage, I call it “spiritual intercourse” because I want to feel infinite passion with my audience.

The way you marry your music to your art is so beautiful and rich with symbolism. I was looking at a recent publicity photo and noticed the flecks of light, those subtle triangles buried in the image and the reflection in the mace you’re holding is the face of a wolf.

Very good! You’re the only one who has ever picked that up – that’s amazing! Put this in the article because I want you to get credit for it. That pic has been out for a year and nobody has noticed those symbols that we worked really hard to get in there.

To say you’re an activist is an understatement. It seems like activism defines you as much as being an artist or a musician.

I speak out for the communities that I care about. I came from the working class so I care about them. I care about all women. Even though I am a lesbian and don’t plan to have children, I care about women’s reproductive rights. I fight vehemently for the rights of the LGBT community.

We are marginalized. We have to fight for anything we get. Straight people don’t know what it’s like to walk out of the house holding their loved one’s hand and immediately be judged or the target of ridicule.

I was in Hawaii celebrating an anniversary with an ex a few years back. We were taking couples surfing lessons. This old leathery man who looked like he worked out with 15-pound bicep curls for 20 years but forgot leg day for 25 years came up to us. He had a big bouffant hairdo and man-titties. He walked up to me and slapped me hard on the shoulder and said, “Happy Father’s Day!” It was Father’s Day so it confused me but I said, “Thank you.”

Then, he sarcastically said, “Oh, I thought you were a man.” I just looked at him and said, “No worries! I saw your breasts, thought you were a woman and was about to tell you that this wasn’t a topless beach.” Of all the couples of all ages and nationalities there to take lessons, he chose the one lesbian couple on the beach to target.

What are you listening to on your playlist right now?

That’s not what I was expecting.

My tastes range from Nirvana to Radiohead to Billie Holiday. For me, music is art. As much as Picasso’s art is art, a song is that same amount of art. I’m an art lover. But if my heart gets broken, I don’t pull out Picasso to make me feel better. I listen to music to take me where I want to go. Plus, art is expensive and most songs are only $1.29. [laughs]

What do you want to say to the LGBTQ community in Atlanta?

The tour is called “The Resistance Tour” to unite people who are part of the resistance who want to come and listen to some good music together. To the LGBTQ community that may have never heard of me because I’m not on your dance mix, I say that beyond the cacophony of our music and exotic sounds, we bring a message that we have not yet begun to fight. I invite you to come down and be a part of this because we are exclusively inclusive.

To the young people, I want them to know that adults are doing battle for them. They are loved and I don’t want them to go anywhere. Some kids message me about being bullied and want to kill themselves. Don’t leave us in a monochrome world – keep your hue in this world. You all are just beginning to blossom, my loves!

Otep
Wednesday, June 7 at 7 p.m.
The Masquerade
$14 in advance, $16 at the door
www.masqueradeatlanta.com