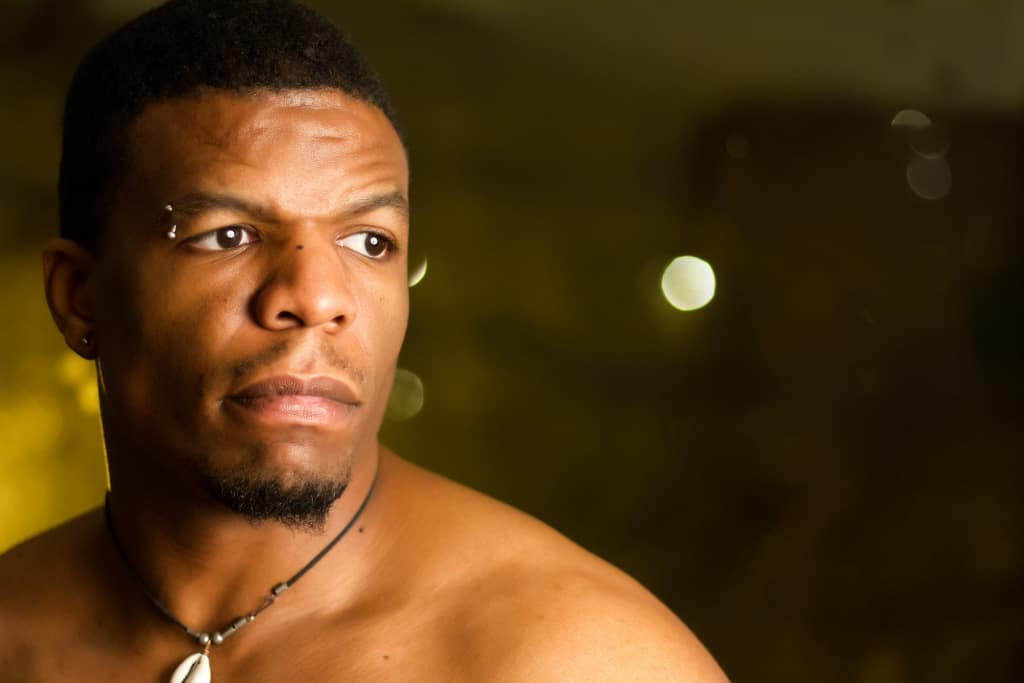 When Tim’m West was a child, he had a severe speech impediment, so he wasn’t able to pronounce his first name, Timothy, correctly. So it came out “Tim’m.” Eventually he got over the impediment, but he wasn’t ready to start saying his name any differently.

Overcoming his speech impediment cleared a path for West to use his voice in larger and more diverse ways—LGBT youth activist, author, poet, scholar and rapper. He even landed a spot on LGBThistorymonth.com’s list of 2015 icons alongside Laverne Cox, Jason Collins, Robin Roberts and Edie Windsor.

And earlier this month, after a recent move to Atlanta from Washington, D.C., the queer renaissance man and board member at the National Center for Civil and Human Rights’ LGBT Institute released his sixth solo album, “ICONography.”

West grew up singing in gospel choirs in his minister father’s church and later in a capella groups during college, but he didn’t formally get into a studio until the year 2000, as co-founder of the black, queer hip-hop group Deep Dickollective (DDC).

He recorded his first solo album in 2003 and proceeded to roll out a series of albums, either with DDC or solo, over the next several years while still pursuing his day job as an educator.

As far as his sound goes, he considers himself a “golden era hip-hop head” with an emphasis on the more politically conscious hip-hop music that came out from 1987 to 1994.

He thought he might be done with his music career after going through writer’s block while briefly living in Washington, D.C. last year. That changed after he accepted a position as managing director of Teach For America’s LGBT Community Initiative and moved to Atlanta.

“Literally within weeks of coming to Atlanta I just had a burst of creative inspiration,” he says. “I think in part because Atlanta has a pretty vibrant music scene, a lot of artists and good energy.”

And out came “ICONography.”

Anomaly in the hip-hop industry

West sings, emcees and does spoken word on his latest, with lyrics that address various social justice issues, including police violence against the African-American community. But he includes love songs as well.

There’s also the occasional bit of house music, which West hasn’t used since his first album and which is a way for him to pay homage to black queer DJs, many of whom have passed away, like Frankie Knuckles.

“There was something about the energy and the urgency of their living that I think gave rise to a certain celebration and a celebratory moment,” he says.

As a queer rapper, West is a bit of an anomaly in the hip-hop industry even now, 15 years after his first album.

“I think the fact that we haven’t had a mainstream gay hip-hop artist is a testament still to the homophobia of the industry,” he says, noting that there is a vibrant underground scene of LGBT hip-hop in almost every city in the country.

“When you listen to mainstream radio there’s a certain limited number of topics that a lot of rappers talk about. You know, getting high, having sex with women, and their money and their cars,” West says. “I think there’s this idea of really challenging the notion of a rapper or a hip-hop artist. You know, a hip-hop artist can’t be highly intelligent, can’t be very socially conscious, can’t also be engaged in nonprofit or corporate spaces to impact change.”

He also believes the white LGBT community has been slow to accept masculine black LGBT rappers.

“I think a masculine black man in the eyes of many gay white people is still seen as a threatening presence,” he says, citing Kaoz, Sonny Loubang, DDm, JB Raps and I.K.P. among other black masculine LGBT rappers whose messages aren’t resonating like they should.

Some have reached out to West as a mentor to talk about the issue.

“I’ve said, you know, interestingly and sadly, I think people would find you less threatening in the queer community if you were to gay it up,” he says. “But I don’t think that people should be inauthentic in their presentation and if you happen to be masculine, you’re just masculine. And that shouldn’t be a threat.”

He’s more matter of fact about his sexuality with “ICONography,” a stark contrast to his earlier work, when he felt more of a need to point it out.

“I really feel like that’s really what the change is, it’s getting people outside of our community to find that there’s something beautiful and moving about our stories, just like anybody else’s.”