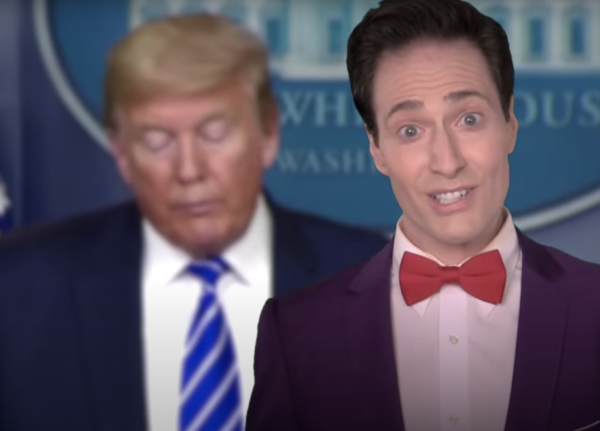 WATCH: Randy Rainbow Strikes Again with ‘A Spoonful of Clorox’

Randy Rainbow has returned once more, taking on his favorite orange nemesis in the video to his latest musical parody, “A Spoonful of Clorox.”

As you might have guessed, the hilarious new song borrows the tune from the classic “A Spoonful of Sugar,” from Disney’s “Mary Poppins.” In it, the popular comedian, actor, writer, host and internet celebrity skewers Donald Trump (via his usual mock interview format) over those eyebrow-raising comments about the potential healing properties of disinfectants at a Coronavirus Press Conference late last week.

He’s been a columnist for HX Magazine, written for Kathy Griffin, and served as host and/or performer in a multitude of theatrical concerts and benefits for the Broadway, cabaret, and gay communities, as well as many other events at some of New York City’s most popular nightspots. Most recently, he was seen in a guest-starring role on the FX series, “Better Things.”

Always as quick as he is prolific, Rainbow acted with particular speed on the new song – it was finished and shared with the world less than 24 hours after Trump’s latest questionable remarks (which he later claimed were meant to be “sarcastic”) had at least two-thirds of America shaking its collective head.